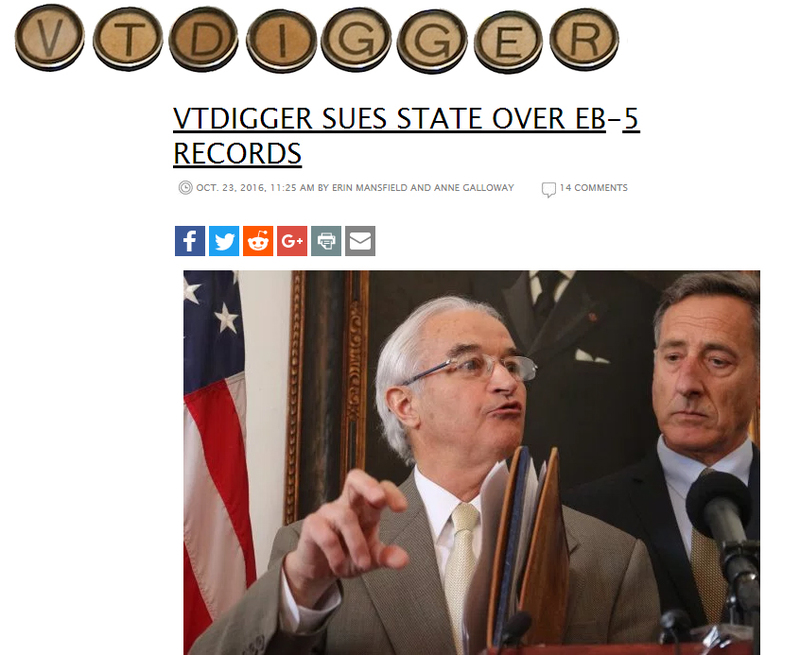 VTDigger is suing the state of Vermont in order to obtain records associated with oversight of the state’s EB-5 immigrant investment program.

The news organization alleges the Shumlin administration has improperly withheld documents, including correspondence between key members of the administration and federal officials about the status of the Vermont EB-5 Regional Center.

Officials with the Agency of Commerce and Community Development have refused to release correspondence about a federal review of the Vermont EB-5 Regional Center, which was responsible for overseeing a massive redevelopment of Jay Peak that has been tied to an alleged “Ponzi-like” scheme perpetrated by the developers.

It is not known what the federal review by the U.S. Citizenship and Immigration Services entails because the government agency won’t respond to questions about it and the state has also kept mum. The USCIS review is separate from the Securities and Exchange Commission investigation of fraud at Jay Peak.

The U.S. Citizenship and Immigration Services requested information from the state in August. Neither the request, nor the state’s response has been released to VTDigger or to the Burlington Free Press, which also requested documents.

Because of the information blackout, the status of the Vermont EB-5 Regional Center is unclear and it is not known whether the state program has been penalized in any way.

USCIS terminated South Dakota’s state EB-5 program , which was run by a private entity. The feds found that the program was mismanaged. Michigan’s EB-5 program is the only one in the nation that like Vermont’s is run by state government.

VTDigger is seeking communication between the Agency of Commerce and Community Development and the U.S. Citizenship and Immigration Services for a seven-day period in August.

Under the advice of the Vermont Attorney General’s office, the agency has refused to release records pertaining to the EB-5 program, claiming the litigation hold exemption in the Vermont Public Records Act. The attorney general is arguing the documents need to be kept private because they could be part of a court case.

Sorrell has told reporters that all state communication about the EB-5 would be held from public purview until the fraud litigation is concluded. Officials have said the civil cases could take at least five years. The SEC doesn’t anticipate the Quiros case going to trial until a year from now, and it could also be a year before the U.S. Attorney files potential criminal charges against the developers and others.

VTDigger argues that the documents requested are “not in any way relevant” to the fraud case brought by the state against Quiros and Stenger and should be released to the public immediately. 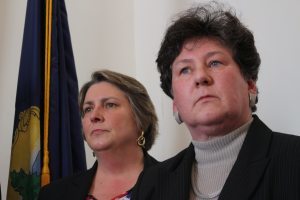 Susan Donegan, right, the commissioner of the Department of Financial Regulation, and Pat Moulton, secretary of the Agency of Commerce and Community Development, at a news conference on April 14 about alleged fraud at Jay Peak.

VTDigger’s lawsuit alleges that “By issuing a blanket denial to access to records pertaining to the state’s administration of the EB-5 program, the state is essentially roping off an entire sector of its administration and shielding it from any public scrutiny.”

Sorrell issued a letter to state officials in October 2015, putting a litigation hold on all information about the EB-5 program. On April 12, 2016, the Securities and Exchange Commission filed a 52-count charge against Jay Peak developers Ariel Quiros and Bill Stenger for misusing $200 million in immigrant investor funds. Two days later, the Department of Financial Regulation filed a similar fraud suit against the developers. The state and federal lawsuits were made public on April 14.

After the litigation hold was put in place last October, however, the state continued to provide documents about the EB-5 program to press organizations. The Department of Financial Regulation and the Agency of Commerce and Community Development gave VTDigger and the Burlington Free Press communications between Stenger and the state through April 8.

On April 15, Sorrell said the litigation hold would bar VTDigger and other news organizations from obtaining information about the state’s EB-5 program. Citing the litigation hold, the administration of Gov. Peter Shumlin rejected requests for communications between Bill Stenger and Alex MacLean, Shumlin’s former chief of staff who went to work for Jay Peak in 2013. A VTDigger request placed on April 13 for communication between Sen. Patrick Leahy and state officials was also barred.

Anne Galloway, the editor of VTDigger and the executive director of the Vermont Journalism Trust, filed the complaint Tuesday in Washington Superior Court’s civil division in Montpelier.

“We believe these documents contain information about the oversight of the EB-5 program,” Galloway said. “We believe the public has a right to know what the future of the state center will be.”

The lawsuit was served on Thursday to the Vermont Attorney General’s office, which represents the state of Vermont. Sorrell did not respond to requests for comment.

The Vermont Journalism Trust says the state of Vermont has used the litigation exception to the Public Records Law “to avoid all accountability for its acts pertaining to EB-5 program as a whole.”

“Using the cloak of the litigation exception to the Public Records Act, the State of Vermont has denied all access to these records, citing its litigation against the Jay Peak enterprises and Ariel Quiros and William Stenger,” the suit says. “The State’s position is an abuse of the Public Records Law and must be overturned.”

Documents obtained by VTDigger before the litigation hold was put in placesuggest the Vermont Regional EB-5 Center for years ignored red flags that pointed to the misuse of EB-5 funds at Jay Peak. A former business partner went directly to the secretary of the Agency of Commerce and Community Development with information about the alleged fraud in May 2012, but his warnings were disregarded. In July 2014, VTDigger reported on allegations from investors that Ariel Quiros and Bill Stenger had misused funds.