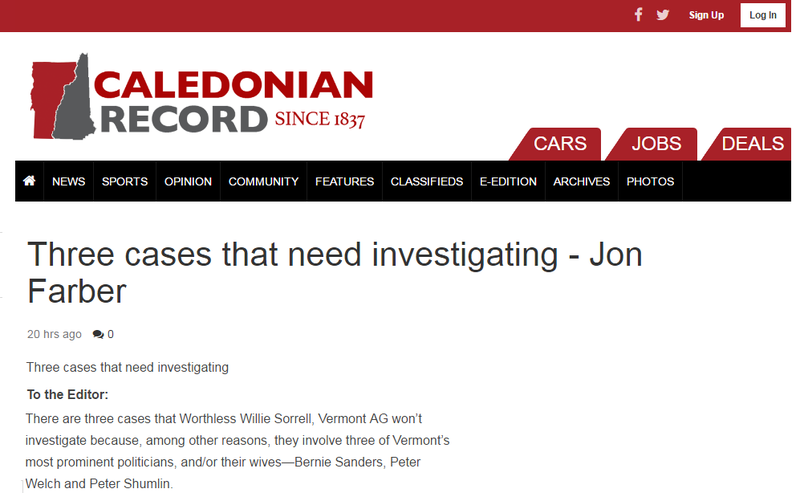 There are three cases that Worthless Willie Sorrell, Vermont AG won’t investigate because, among other reasons, they involve three of Vermont’s most prominent politicians, and/or their wives—Bernie Sanders, Peter Welch and Peter Shumlin.

Jane Sanders, while president of Burlington College, made an ill-advised purchase of 32 acres of lakefront property that left the college $10 million in debt. She then either resigned or was allowed to resign after accepting a ‘golden parachute’ offer of a sizable amount.

The state has recently decided that we Vermont taxpayers should be responsible for taking care of the Burlington College debt incurred by “President” Sanders.

In the EB-5 scandal, were Peter Shumlin and Pat Moulton, Director of the Vermont Agency of Commercial and Community Development guilty of MORE than gross oversight when they stood idly by and allowed their good pal, Bill Stenger to set up the elaborate Ponzi scheme that allowed Ariel Quiros to either siphon off or misdirect some $250 million in investor funds. At the very time that the Ponzi scheme was really set into motion by Stenger in 2011, Moulton and Shumlin were naming Stenger Vermont Businessman of the year.

Parallel to the ‘Play for Pay’ scheme perpetuated by Hillary Clinton when she was Secretary of State between 2009-12 where big contributors to the Clinton Foundation got special access to politicians and were granted special favors by the State Dept, major contributors to the campaigns of VT At Large Congressman Peter Welch receive favorable ruling after favorable ruling when they come before the Vermont Public Service Board(PSB).

Is it just a coincidence that one of the three members of the PSB, appointed by Peter Shumlin in 2013, is none other than Margaret Cheney who just happens to be Peter Welch’s wife? Why isn’t Sorrell doing something to end this blatant conflict of interest?

Of course Sorrell , who has done nothing as the AG for the past 16 years, will continue his splendid record of non-achievement at the taxpayers expense. And Vermont’s political ‘royalty’ remains free of the rules and regulations that we, the taxpayers, have to follow.