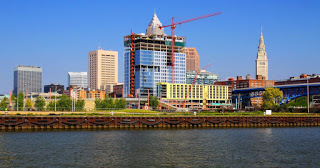 The past 10 years has seen a remarkable turn around for downtown Cleveland. The city’s downtown core and inner ring suburbs have been home to an impressive alliance of public and private entities that has successfully encouraged new development in locations that were previously overlooked as viable investment options.

These completed developments are now paying dividends to the community, with increased occupancy rates, an influx of highly educated young workers, revitalized interest in living, working, and shopping downtown, and encouraging the construction of new developments. The Flats East Bank project is one of these catalytic development projects that helped further Cleveland’s economic comeback.

The initial investment of approximately $275 million for the construction of the first phase of the Flats provided a significant economic impact to Northeast Ohio. New orders for building materials and the thousands of man-hours worked by union laborers meant the project was a windfall to construction materials manufacturers and construction workers—two groups that were hit hard by the effects of the 2008 Financial Crisis.

Additionally, the construction of the new office tower allowed for Cleveland to keep Ernst & Young’s Regional Headquarters as a downtown tenant. At the same time that the Flats project was being planned, E&Y realized that it had outgrown its previous downtown offices and was looking to move into newer and more efficient facilities; a move that likely would have resulted in E&Y leaving Cleveland for another location. However, the developers of the Flats were able to incorporate everything E&Y needed in its new space, allowing the company to maintain its Regional Headquarters—and associated jobs—in Cleveland.

Beyond the immediate benefits of the Flats, long-term benefits of the project continue to ripple through the local economy. As the first new, large-scale mixed use development in Cleveland in several decades, the project has helped to improve the image of downtown Cleveland, drawing new people to the area – including new office tenants, residents, and visitors.  This has had the effect of dramatically improving the available office stock in downtown, which is illustrated by the vacancy rates of office space in Cleveland’s core. Overall rates have dropped from 23% in mid 2011 to 18.4% by the first quarter of 2015 and—for Class A office space specifically—to a level of 15.1% vacancy*.

We at CiF are pleased to have played an important part in the Flats East Bank, given the project’s positive impact on the growth of our region.