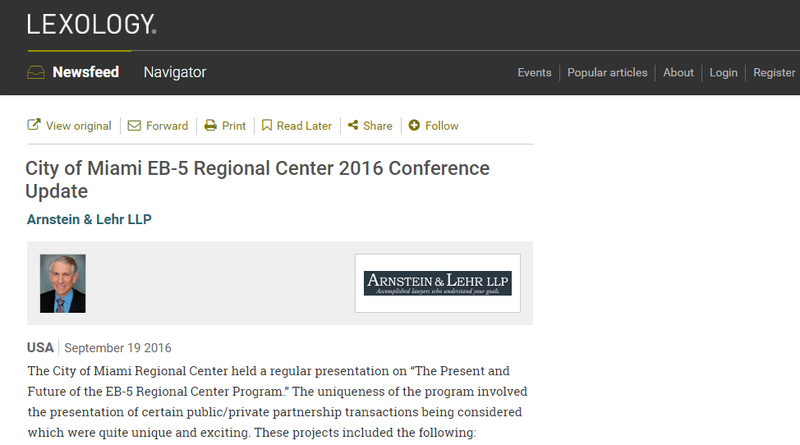 The City of Miami Regional Center held a regular presentation on “The Present and Future of the EB-5 Regional Center Program.” The uniqueness of the program involved the presentation of certain public/private partnership transactions being considered which were quite unique and exciting. These projects included the following:

The guest speakers discussed various matters that were of interest.

3. I presented on SEC investigations and the necessity of much stricter loan administration standards.

With respect to SEC matters, it was noted that the SEC has pronounced that EB-5 is a priority for the year 2016 and that the SEC will be undertaking spot audits and investigations of regional centers and projects. Furthermore, the SEC reacts to information provided and complaints raised and are taking a much more active role in connection therewith. They have even conducted random inquiries with regional centers and are doing spot unannounced inspections as well. Furthermore, the SEC has taken a far more active position in trying to prevent fraud, escrow violations and broker-dealer violations and is still consistently bringing actions against parties to avoid the payment of unlawful commissions for transaction-based compensation to unlicensed broker-dealers in connection with their referring of investors to a project.

I noted that Director Colucci in his July 28, 2016 stakeholder announcement at the Miami Stakeholders Conference stated as follows:

This seems like a clear departure from prior policy in that there is a formal statement that regional centers are being held responsible for the integrity of the EB-5 projects, including both financial and immigration matters. This is a heightened responsibility that will eventually be contained in the new integrity measures being undertaken by Congress but USCIS’s has in fact dictated that their position is similar to the proposed legislation.

I discussed in great detail the necessity of having independence in the loan administration and/or fund distribution process to ensure that money is properly applied both from a financial and immigration standpoint. The program’s integrity is based upon making sure that funding by investors is monitored in the same manner as a bank loan would be monitored to ensure proper treatment and credibility of the program.

The next speaker, Helio Carrasquillo, discussed EB-5 and tax credits and the benefit of EB-5 projects using tax credit benefits to add to the capital stack.

The next speaker, Edward Brashera, spoke of the pending legislation and the integrity measures that are proposed to be adopted, many of which have already been commented on by the EB-5 securities roundtable as specific securities law issues.

In connection with the overall theme of the regional center program and the regulation thereto, it is noteworthy that the Government Accountability Office (GAO) issued a report on September 13th that dealt with “progress made to detect and prevent fraud, but additional actions could further agency efforts.”

The report indicated that the agency needs to do additional risk assessments to mitigate against any potential fraud in the program. Recommendations were made in connection thereto, which included the following:

As noted, the immigration program is garnering significant attention from both a congressional and agency standpoint.