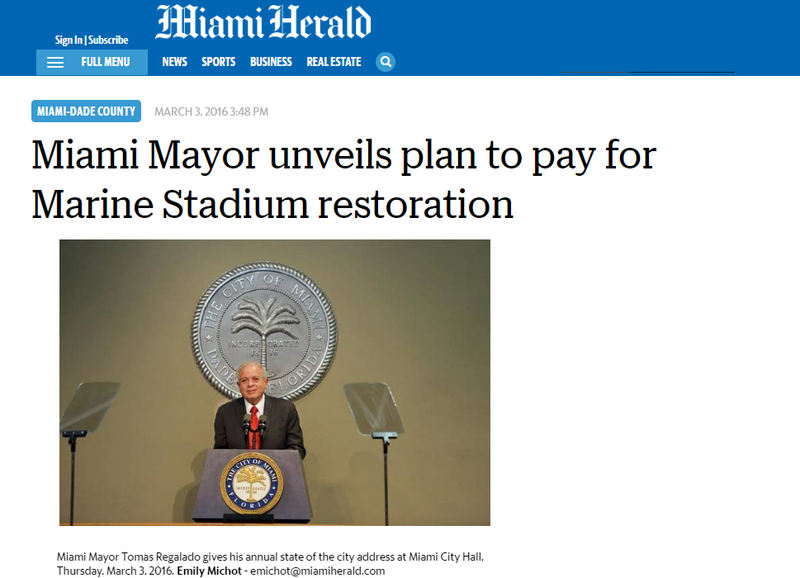 Miami Mayor Tomás Regalado has talked for years about renovating and reopening the Marine Stadium, Miami’s historic and abandoned icon on the water. On Thursday, he finally put some money behind his words.

Regalado announced during his annual State of the City address that he will introduce legislation soon to steer a steady stream of cash toward the restoration of the historic structure by ensuring that all revenues generated by a new city event space outside the stadium on the Rickenbacker Causeway go toward the venue. He said he also expects to include a $3 million allocation toward the stadium’s restoration in his 2017 budget, and plans to launch a competitive solicitation for repairs and management of the venue, which would ultimately require voter approval.

“2016 will be the year of the Miami Marine Stadium,” Regalado proclaimed. 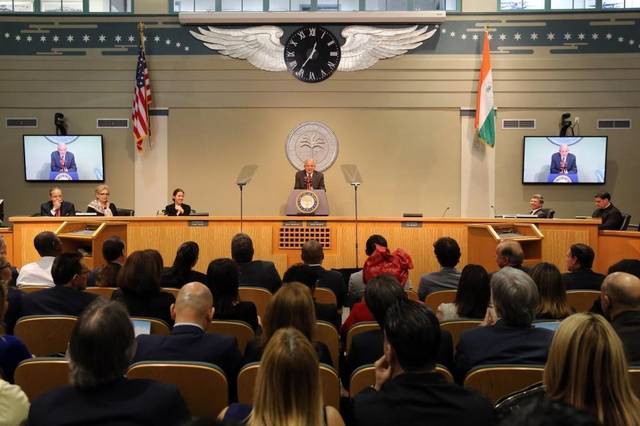 The mayor’s announcement came as he also touted 2015 as a year of records for the city, which according to City Manager Daniel Alfonso has hit unprecedented real estate values. Regalado noted that the city’s police force and fire department went on record recruiting and hiring sprees last year, and claimed that last year “the city of Miami had the lowest reported crime in over a decade.”

He touted the recent signing of a policing agreement with the Department of Justice, the city’s continued pursuit of projects financed by EB-5 immigrant visas, and the city’s study of sea level rise and recent opening of two pumping stations.

But Regalado focused largely on the success of the first Miami International Boat Show on Virginia Key, and what that meant for the Marine Stadium’s restoration, which comes with an estimated $37 million price tag. The boat show, which paid $1 million in base rent this year to the city, was held on a new $24 million outdoor event space that city officials promised will be converted into park space during down times. Additional shows would bring more revenue to the stadium, although city administrators say they haven’t booked any yet.

Critics of the city’s plans on Virginia Key have accused Regalado’s administration of using the restoration of Marine Stadium as a red herring to justify commercial expansion on Virginia Key. It’s likely that any plans to hold future events on the site will cause friction with the village of Key Biscayne, which is suing the city.

But the mayor dismissed them and the media Thursday, saying everyone wants to make a controversy out of a success story.

“When we should have been celebrating the start of the long-awaited project, the media and some people were focused on predicting the [Boat Show] would be an economic and environmental” disaster, he said. “The truth is it was the total opposite.”

The city is finishing a study on the structural stability of the stadium, and those findings could affect Regalado’s plans. But he says that with his proposal, a $3 million grant from the county and several other pledges toward the stadium, the city should have enough money to entice additional dollars or seek long-term financing.

His announcement drew praise form Stephanie Meeks, the president of the National Trust for Historic Preservation.

“Our work at Miami Marine is not over,” she said. “But the momentum generated by the Boat Show along with this announcement clearly demonstrate that the Stadium is headed in the right direction.”