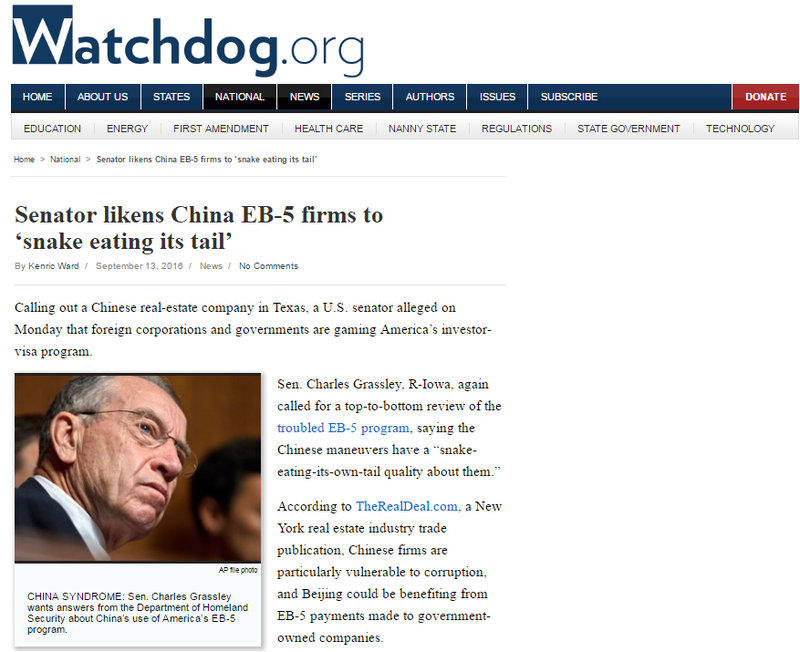 Calling out a Chinese real-estate company in Texas, a U.S. senator alleged on Monday that foreign corporations and governments are gaming America’s investor-visa program.

Sen. Charles Grassley, R-Iowa, again called for a top-to-bottom review of the troubled EB-5 program, saying the Chinese maneuvers have a “snake-eating-its-own-tail quality about them.”

According to TheRealDeal.com, a New York real estate industry trade publication, Chinese firms are particularly vulnerable to corruption, and Beijing could be benefiting from EB-5 payments made to government-owned companies.

“After investors obtain green cards, for $500,000 apiece, Modern Land plans to offer them the option to apply that money toward the purchase a home,” Grassley related in a letter to  Homeland Security Secretary Jeh Johnson.

“EB-5 investment projects that create a tangible output, such as a real estate development, that is principally, if not exclusively, available for the enjoyment only of the foreign investors themselves, have a snake-eating-its-own-tail quality about them that Congress absolutely did not intend,” the senator said.

“They subordinate any benefit to the American people … to the benefit of wealthy foreign investors,” he charged.

Citing other Chinese EB-5 centers in New York and Illinois, Grassley noted that the foreign firms are not subject to U.S. securities regulations.

Crown Point did not answer Watchdog.org’s request for comment. Johnson’s office, whose department oversees the U.S. Citizenship and Immigration Services, had not responded to Grassley’s letter by publication.

Both bills seek to curb EB-5 fraud and abuse and return the program to its original intent of assisting rural and economically depressed parts of the country.

“We need strong measures to curb fraud, increase transparency and make sure U.S. regulators and foreign investors know where every dollar is coming from and going. Without reforms to protect U.S. interests, national security and areas that need investments most, the program should expire,” Grassley said.