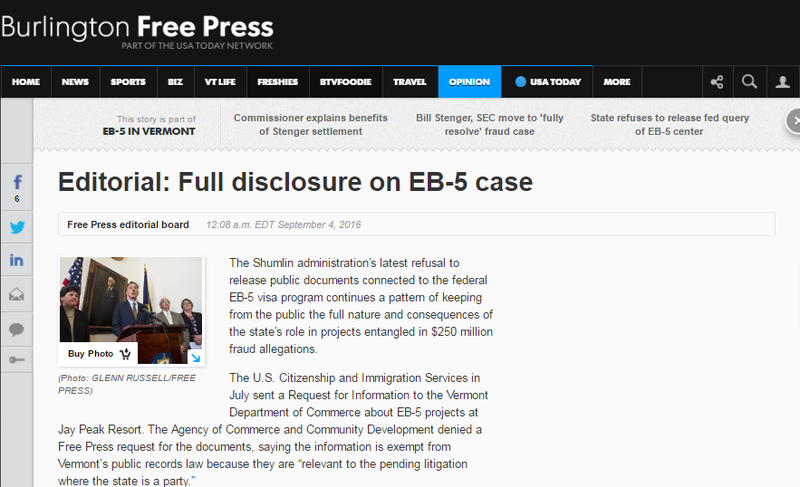 The Shumlin administration’s latest refusal to release public documents connected to the federal EB-5 visa program continues a pattern of keeping from the public the full nature and consequences of the state’s role in projects entangled in $250 million fraud allegations.

The U.S. Citizenship and Immigration Services in July sent a Request for Information to the Vermont Department of Commerce about EB-5 projects at Jay Peak Resort. The Agency of Commerce and Community Development denied a Free Press request for the documents, saying the information is exempt from Vermont’s public records law because they are “relevant to the pending litigation where the state is a party.”

Earlier in the month, the Commerce Agency withheld the resignation letter of the director of the state center overseeing the EB-5 program, after missing the deadline for responding to a public records request. The agency released the letter after the Free Press appealed the original denial.

The fraud case, the largest in the history of the EB-5 program, has an impact on the state’s reputation as a destination for investment money. How long will Vermonters have to wait to find out how well – or poorly – Montpelier lived up to its obligation in overseeing the program?

The U.S. Securities and Exchange Commission, as well as the Vermont Department or Financial Regulation, have accused William Stenger and Ariel Quiros, the principals of Jay, of misappropriating as much as $250 million raised through the EB-5 program overseen by the Vermont Regional Center, a part of state government.

Under the EB-5 visa program, foreign nationals can obtain resident status – so-called green cards – by investing $500,000 in projects in rural or economically depressed areas that generate a certain number of jobs.

On Thursday, Stenger announced he had reached a settlement with the SEC that “sets up a framework to fully resolve the case the SEC filed against me,” while neither admitting to nor denying any wrongdoing in the case.

Given the size and complexity of the fraud allegations surrounding the Northeast Kingdom projects, the state could claim the “pending litigation” exception to withhold any document having to do with the visa program or that contains the phrase “EB-5.”

And the court cases surrounding the project could go on for years even after the SEC charges are settled.

The ultimate responsibility for explaining the state’s role in one of the largest fraud cases to hit the Green Mountain State rests with the governor’s office.

Vermonters shouldn’t be last in line for a full accounting from their government.