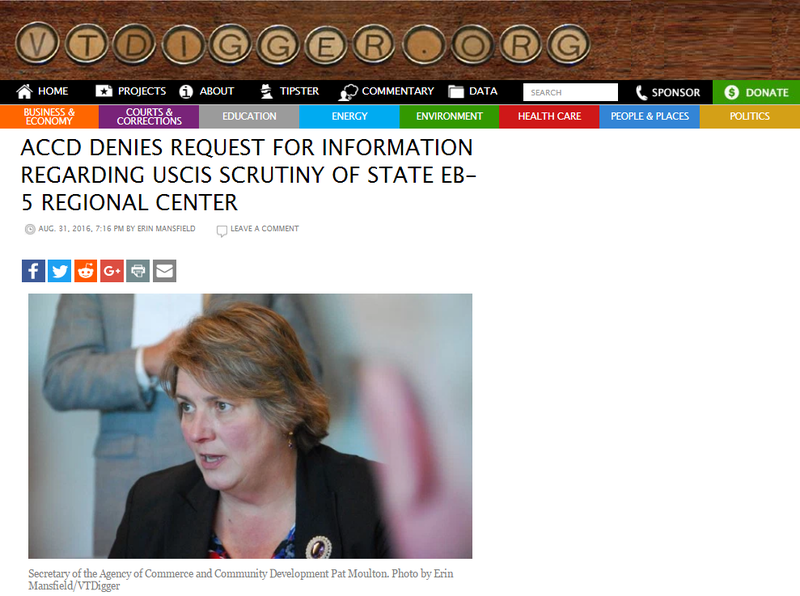 A state agency that oversaw immigrant investment projects that were part of an alleged “Ponzi-like” scheme has denied a request from VTDigger under the Vermont Public Records Act.

On Wednesday morning, VTDigger requested communication between U.S. Citizenship and Immigration Services and the Agency of Commerce and Community Development, including the Vermont EB-5 Regional Center, for the past seven calendar days.

USCIS has asked the agency to respond to questions about the Vermont Regional Center’s oversight of EB-5 projects.

The Agency of Commerce and Community Development has refused to release the letter from USCIS, a series of questions from the federal agency, and the state’s response. The Shumlin administration also has declined to provide email communications from USCIS about the status of the regional center.

State officials cited a “litigation hold” on all communications regarding Jay Peak projects, which are at the center of a Securities and Exchange Commission probe.

Fraud charges were filed against the Jay Peak developers Ariel Quiros and Bill Stenger in April. The Securities and Exchange Commission and the state Department of Financial Regulation have accused the two men of misusing $200 million in EB-5 immigrant investor funds.

Investors have accused the state of ignoring their complaints. Email communications between Stenger and Brent Raymond, the former regional center director, show that the state had a cozy relationship with the former CEO and president of the resort. Gov. Peter Shumlin has received large contributions from the developers and associates and in 2015 pressed the Department of Financial Regulation to “partially approve” two projects that were under investigation by the department. In 2013, he appeared in a video promoting the Jay Peak projects.

Dale Azaria, a lawyer for the agency, denied VTDigger’s request on Wednesday afternoon. “In light of pending litigation involving the Jay Peak, AnC Bio and Q Burke projects, the records you requested from the Agency of Commerce and Community Development regarding communications with the U.S. Citizenship and Immigration Services are exempt from public inspection and copying,” Azaria wrote.

Azaria cited exemptions under the Vermont Public Records Act that make information within an email exempt by law, exempt because of private finances of individuals or corporations, and trade secrets.

USCIS has been requesting information from the state on the regional center. Pat Moulton, the secretary of the agency, declined to comment on Aug. 23 and did not return voicemails placed Wednesday regarding the status of the Vermont EB-5 Regional Center.

Gene Fullam, the director of the regional center, resigned his position abruptly on July 20. Public records released by the state so far are either heavily redacted or do not cite a reason for Fullam’s departure.