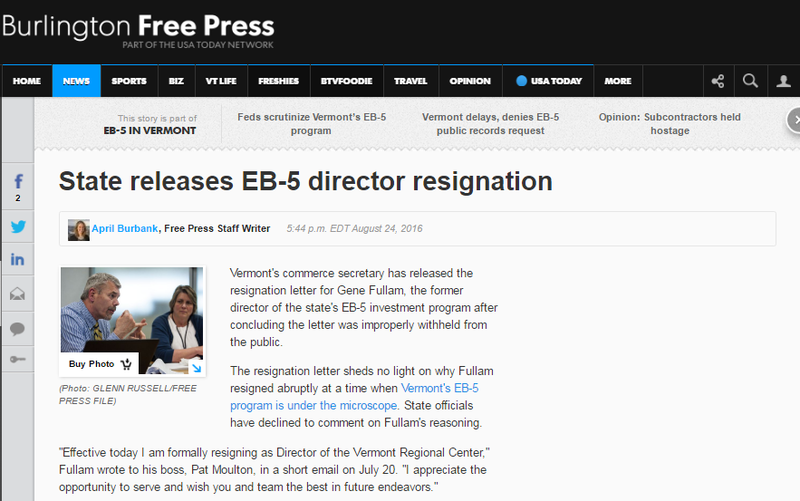 Vermont's commerce secretary has released the resignation letter for Gene Fullam, the former director of the state's EB-5 investment program after concluding the letter was improperly withheld from the public.

The resignation letter sheds no light on why Fullam resigned abruptly at a time when Vermont's EB-5 program is under the microscope. State officials have declined to comment on Fullam's reasoning.

"Effective today I am formally resigning as Director of the Vermont Regional Center," Fullam wrote to his boss, Pat Moulton, in a short email on July 20. "I appreciate the opportunity to serve and wish you and team the best in future endeavors."

Pat Moulton, secretary of the Agency of Commerce and Community Development, accepted Fullam's resignation about 20 minutes later. She wrote again to Fullam the following day noting that her decision was "irrevocable."

The state had previously refused to release Fullam's resignation letter.

Moulton overturned the decision after the Burlington Free Press filed an appeal arguing that resignation letters were not necessarily exempt from state public records law.

"After considering your appeal," Moulton wrote in a letter to the Burlington Free Press, "I have concluded that the record should be produced."

The Vermont Agency of Commerce and Community Development produced about 200 pages of emails between Fullam and Moulton in response to other sections of the public records request. Some parts of the emails were redacted.