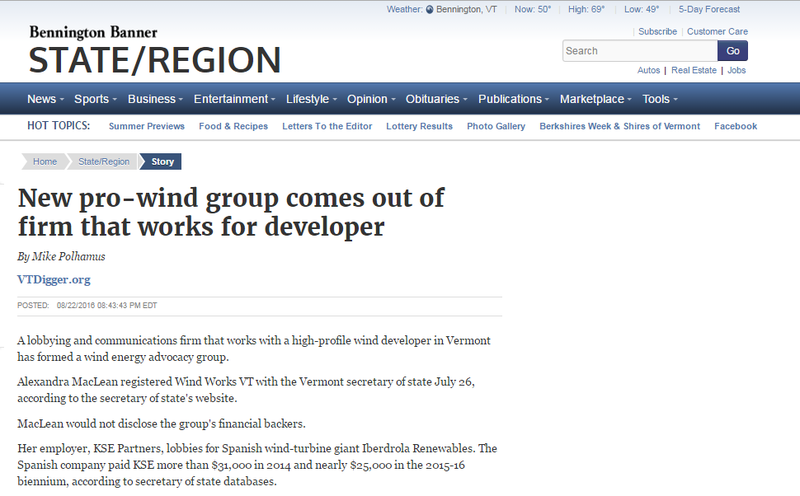 A lobbying and communications firm that works with a high-profile wind developer in Vermont has formed a wind energy advocacy group.

MacLean would not disclose the group's financial backers.

Her employer, KSE Partners, lobbies for Spanish wind-turbine giant Iberdrola Renewables. The Spanish company paid KSE more than $31,000 in 2014 and nearly $25,000 in the 2015-16 biennium, according to secretary of state databases.

MacLean said the purpose of the group would be to provide information about the benefits of wind power and counter arguments by opponents.

She is president of strategic communications at the Montpelier-based KSE Partners. She previously worked for Gov. Peter Shumlin as deputy chief of staff and secretary of civil and military affairs and ran his 2010 and 2012 campaigns. She also oversaw investor recruitment for projects led by Jay Peak developer Bill Stenger under the EB-5 visa program.

MacLean said she was committed to "respecting the privacy" of the entities financially involved. She would not say whether Iberdrola was one of the contributors.

Iberdrola is involved in wind projects either built or anticipated in Vermont.

The company is operating under the name Deerfield Wind in its bid to build 15 turbines in the Green Mountain National Forest on a ridge that divides Searsburg and Readsboro. The structures are slated to stand around 400 feet tall and would produce 2 megawatts each.

Iberdrola is also planning a project in Grafton and Windham that would erect 28 wind turbines generating as much as 3.5 megawatts apiece, each of which would potentially top out at a height of 500 feet.

The wind company is also associated with a 21-turbine existing project on Lowell Mountain near Craftsbury.