Our Voice: SD must walk away from EB-5 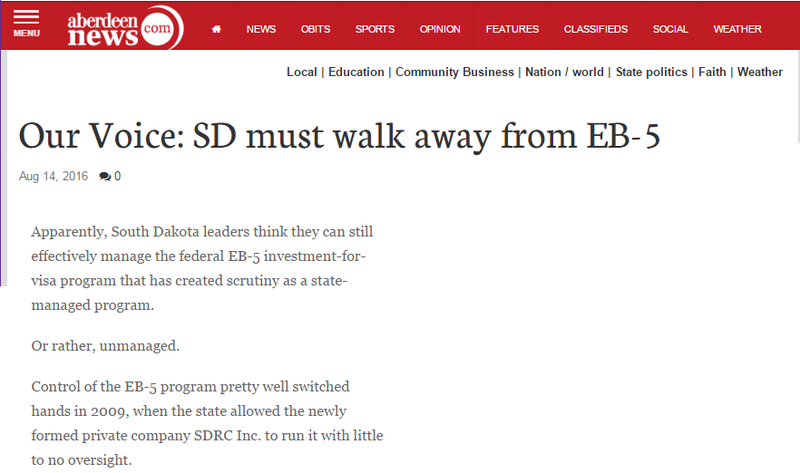 Apparently, South Dakota leaders think they can still effectively manage the federal EB-5 investment-for-visa program that has created scrutiny as a state-managed program.

Control of the EB-5 program pretty well switched hands in 2009, when the state allowed the newly formed private company SDRC Inc. to run it with little to no oversight.

That led to several investigations, lawsuits, at least one failed project, a death and a mess of money that wasn’t necessarily used for its intended purpose.

Now, when most South Dakotans hear “EB-5,” the most common response is something along the lines of an eyeroll.

The Daugaard administration is trying to overturn a federal decision to strip South Dakota state government of its status as an EB-5 immigrant investor center. A law firm representing Gov. Dennis Daugaard filed the state’s response Monday with U.S. Citizenship and Immigration Services.

The federal notice of termination in 2015 reflected actions of the Aberdeen-based SDRC Inc. and its President Joop Bollen, who ran EB-5 for South Dakota.

Instead of walking away from the program, the Daugaard administration wants a reprieve to continue fostering EB-5 for other investments around the state.

In American News reports over the years, we have learned that South Dakota is unusual in having the state itself designated a “regional center” for the administration of the EB-5 program.

In most other states, private businesses (such as SDRC) with no ties to government help other businesses get these investment dollars — up to a million per Green Card investors.

Anyone reading this can essentially function as a “regional center.” If the state doesn’t run this program, someone else can.

Relinquishing control — letting go — is not an admission of guilt. It doesn’t scream that the state cannot do it, rather that it chooses to opt out.

Then the state can still share the possibility of participating in the program with potential foreign investors or those trying to form larger projects within the state. It can do that without being the agency holding the cards. It isn’t game over. It’s taking the bench.

Additionally, experts have said that EB-5 is the last mechanism for projects that can’t get traditional funding. These are high-risk ventures that need cash fast.

Why, then, does South Dakota want in, after all we have learned?

The response the state filed Aug. 8 makes sure to point out that “there is no evidence that the (Governor’s Office of Economic Development) directed, authorized, or knew of such diversion” (of funds).

But shouldn’t the government have known? Yes.

What would be different from one administration to the next? Is the state any more equipped to run EB-5, or be transparent in its handling?

EB-5, under South Dakota or the company the state privately contracted with, has run its course. Trying to keep the state’s hand in the program continues to waste the time of officials who likely have other things to focus on.

Not only is the continued pursuit of ability to administer EB-5 a waste of time and energy, and could continue to come at a cost. Pursuing the program is a disservice to those who are already investing and living in our state.

You can do better South Dakota.