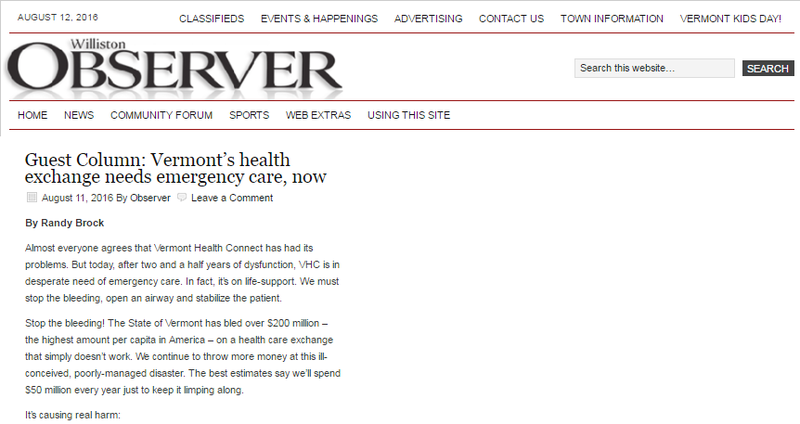 Almost everyone agrees that Vermont Health Connect has had its problems. But today, after two and a half years of dysfunction, VHC is in desperate need of emergency care. In fact, it’s on life-support. We must stop the bleeding, open an airway and stabilize the patient.

Stop the bleeding! The State of Vermont has bled over $200 million – the highest amount per capita in America – on a health care exchange that simply doesn’t work. We continue to throw more money at this ill-conceived, poorly-managed disaster. The best estimates say we’ll spend $50 million every year just to keep it limping along.

Thousands of Vermonters suffer the frustration of dealing with a “system” that after two and a half years still can’t adjust to adding a child or changing a job. How many Vermonters have been denied care or given up trying because of a chronically broken VHC?

Thousands more are forced to spend hours, days and sometimes months, getting their medical bills paid.

And thousands more wait in line for insurance errors to be fixed – and, despite the Shumlin Administration’s claims to the contrary, the waiting lines are growing longer.

Unknown numbers of people are receiving benefits to which they are not entitled because enrollment screening has never worked.

Scores of IT jobs that could have been done by Vermonters, prospective Vermonters or other Americans have been outsourced to foreign workers, brought here by contractors using H1B or L1 visas. It’s been a taxpayer-funded cash drain that makes the losses from the alleged Jay Peak EB-5 fraud look like peanuts in comparison.

Open an airway. Vermont is the only state that forces individual insurance customers into a single, stifling dysfunctional exchange. Every Vermonter should have the right to tell VHC “You’re fired!” and select an alternative.

Stabilize the patient! Rather than build the straight-forward marketplace intended by the federal Affordable Care Act, Vermont designed an exchange as a backdoor platform upon which the Single Payer dream would be built. Thousands of Vermonters have been poorly served, health care professionals have left Vermont for greener pastures and business expansion has been discouraged by the uncertain, unpredictable economic environment.

Don’t spend another dime on “fixing” VHC. We don’t need yet another of the endless $250,000 studies, such as the Legislature has commissioned.

Move to the Federal Exchange, as 39 other states have already done. Allow Vermonters to buy insurance the way they want to, either inside or outside of the federal exchange, just like everyone else in all of the other states.

Hire competent, experienced professionals, not political cronies or ideologues, to head the agencies involved and instruct them to stop the constant experimentation about how we pay for health care, and focus on reducing real costs.

Independently audit – with a mandate not to pull punches – what went wrong, who was responsible, and how much this entire debacle has really cost taxpayers. I think such an analysis will show that Vermont has spent far more than the claimed $200M.

Vermont’s prosperity is challenged by barriers to access and the high cost of health care. But VHC has made these problems worse and is certain to continue to do so. Working together, there is so much we can do to make heath care available and affordable for every Vermonter. That’s the goal and that’s what we need to work on. It’s time for new, competent leadership while the patient can still be resuscitated.

Randy Brock of Swanton is the Republican candidate for Lieutenant Governor. He is a former Vermont State Auditor and State Senator and was the 2012 Republican nominee for Governor. He is completing work on his first book “Bandits in the Boardroom: Lessons from America’s Greatest Corporate Frauds.”