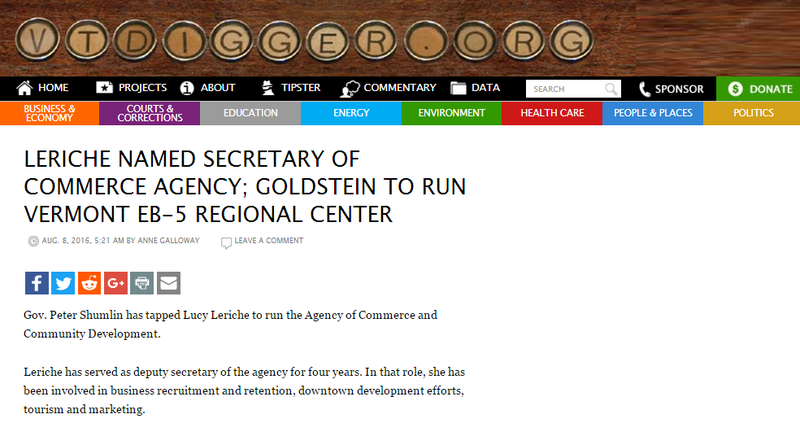 Gov. Peter Shumlin has tapped Lucy Leriche to run the Agency of Commerce and Community Development.

Leriche has served as deputy secretary of the agency for four years. In that role, she has been involved in business recruitment and retention, downtown development efforts, tourism and marketing.

She is replacing Patricia Moulton who is leaving the top post on Sept. 9 to become interim president of Vermont Technical College.

“Lucy has a proven track record of working with employers to create jobs in every region of Vermont,” Shumlin said in a statement. “She’s worked closely with Pat, and will continue the focus of the development team that’s helped Vermont recover from the worst recession in memory.”

Leriche served in the Legislature from 2005 to 2012. She has extensive experience in real estate development and loan underwriting.

Joan Goldstein, the commissioner of the Department of Economic Development, will oversee the Vermont EB-5 Regional Center.

The previous director of the regional center, Eugene Fullam, left the post without explanation last month. He served for less than a year. Fullam oversaw the regional center during a tumultuous period when the state was investigating an alleged fraud at the Jay Peak Resort.

Moulton has held the secretary position since June 2014, and defended the regional center when reports showed that the Jay Peak developers had mistreated immigrant investors. She later became involved in the state investigation and helped to forge a partnership with the Department of Financial Regulation which now has the authority to regulate EB-5 projects under Vermont security laws.

Both Fullam and Moulton maintained after the SEC charges were brought that Vermont has the best regional center in the country because of the arrangement with the Department of Financial Regulation.