In Declining Vermont, the Mood Is More Resigned Than Angry 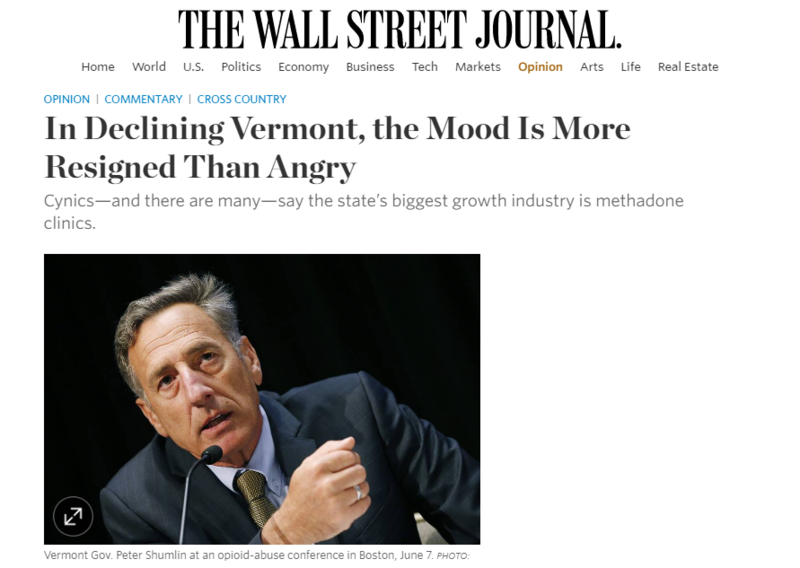 With primary elections coming Tuesday, you would expect a sense of excitement in the warm Vermont air. The state will be electing a new governor in the fall, and under present management things have gone badly—embarrassingly so.

But you don’t see many bumper stickers or even the lawn signs that are normally ubiquitous in a Vermont political season. The other day I counted more “for sale” signs featuring the name of a real-estate agent than political signs for a gubernatorial candidate. One could be forgiven for assuming that there is more interest in leaving Vermont than in fixing it.

Six years ago the Green Mountain State elected a new governor, Democrat Peter Shumlin, and gave him a solid, veto-proof majority in both houses of the legislature. Big things were expected in little Vermont—not least a single-payer health-care system. Mr. Shumlin had promised one. Said it would be his No. 1 priority. Hired high-price consultants to design it. A lot of money passed under the bridge before Gov. Shumlin finally gave up, saying that the economic realities were undeniable: The thing couldn’t be done.

The political hit he took was near fatal. When the governor ran for a third two-year term in 2014 he could not manage a majority of the vote. Under Vermont’s Constitution, that throws the election to the state House. Gov. Shumlin won there easily, 110 votes to 69, but it was a humiliating exercise. He announced not much later that he would bow out in 2016.

Meanwhile, the state went about establishing its own health-care exchange under the umbrella of ObamaCare. But building the website appeared to be nearly as difficult as creating a single-payer system. Lots of money was spent—$200 million, last I saw—and yet the website is still not functioning properly.

The opioid epidemic, to which Gov. Shumlin devoted his entire 2014 state-of-the-state address, continues. There is no sense that the crisis has passed, or even eased. One hears talk of the need, always, for more: more education, more treatment, more enforcement. Cynics—and there are many—say that Vermont’s biggest growth industry is methadone clinics.

Then there’s the scandal involving the EB-5 visa program, designed to attract foreign investment in return for green cards. In April the Securities and Exchange Commission accused the owner and the CEO of Vermont’s Jay Peak ski resort of abusing the visa program through a “Ponzi-like” scheme. No one has accused state officials of wrongdoing, but since they have often bragged about their successful oversight of the EB-5 program, the entire Vermont political establishment ran for cover and pointed fingers at the same time.

The general feeling this election year is that, after the failures of Gov. Shumlin and the Democrats, it is the Republicans’ turn to hold the governorship. There are two principal candidates for the GOP nomination: Phil Scott and Bruce Lisman. Both are native Vermonters who grew up in families of modest means—and there the similarities, in both personality and politics, end. Mr. Scott is the sitting lieutenant governor, a position elected separately from the governor. But he is best known for driving a stock car at a Vermont track called Thunder Road. On Thursday, a source at the track reports, Mr. Scott took second in an 85-lap race sponsored by WDEV and Calkins Portable Toilets. His campaign logo features a checkered racing flag.

Mr. Lisman is best known for having made a fortune on Wall Street. He was a senior manager at Bear Stearns right up until the end. He is rich, especially by Vermont standards, but he wears it well and comes across as a pretty down-to-earth guy. He could never match Mr. Scott in a man-of-the-people showdown, but what he can say is that he is a true outsider—not nothing in this election year.

Both candidates are long on bromides. In ads and speeches, Mr. Lisman promises a different kind of leadership in Montpelier. The implied message is that he would be the tough manager the state needs. Mr. Scott offers talk of bipartisanship, working together, and leading Vermont forward.

It seems strange, in a time when so much is so wrong in the state—such as soaring property taxes that support a bloated educational system—that neither man is really marching to the angry populist beat. In a debate this week on Vermont Public Radio (naturally), Mr. Scott reiterated that he cannot bring himself to support Donald Trump for president, while Mr. Lisman said that he remains undecided, “dismayed by certain things he says.”

Perhaps the state’s most conspicuous politician, Bernie Sanders, has sucked out all the oxygen. Or maybe the voters of Vermont are too old, too tired and too disillusioned for populism, even in this angry year.

This aging has, in itself, become a campaign issue. The candidates have talked about their plans to keep young Vermonters from leaving—such as tax breaks to help them pay off student loans. Mr. Scott aims to increase the state’s static population from about 625,000 to 700,000.

That has a nice ring to it, but many people who are here, and who have those “for sale” signs on their lawns, sense that Vermont’s moment has passed. The sad fact is that it will take more than a Republican governor to Make Vermont Great Again. Serious change requires a better legislature, which seems set to remain leftist Democratic until the end of time—if not later.