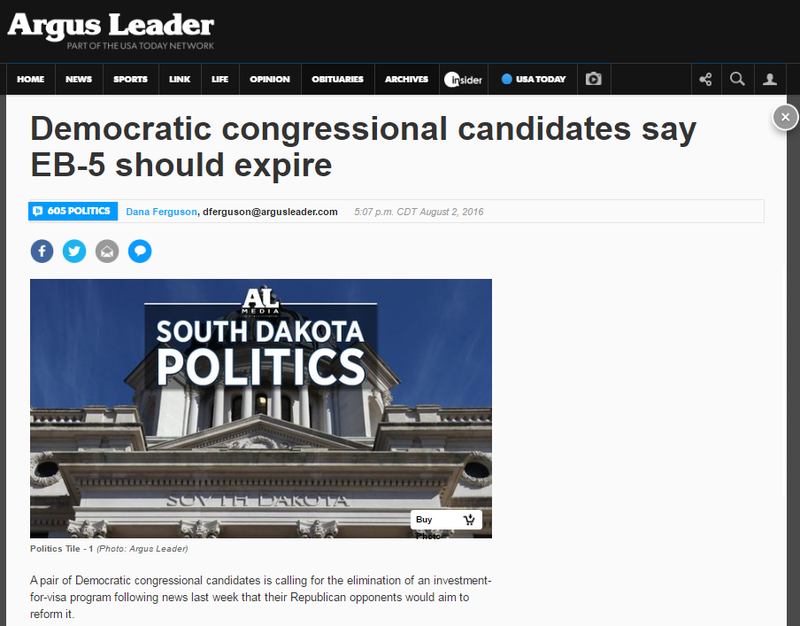 A pair of Democratic congressional candidates is calling for the elimination of an investment-for-visa program following news last week that their Republican opponents would aim to reform it.

State Rep. Paula Hawks, D-Hartford, and Yankton Democrat Jay Williams said Tuesday that they'd like to see the embattled EB-5 program expire Sept. 30. U.S. Rep. Kristi Noem and Sen. John Thune have said they would work to reform the program ahead of that date.

That news comes as the state fights to keep its regional center following a fallout between the United States Citizenship and Immigration Services (USCIS) and the South Dakota Governor's Office of Economic Development over information that went missing under previous administrator Joop Bollen.

Bollen is alleged to have improperly disposed of more than $1.2 million from a fund related to the program, which allows wealthy foreigners to invest at least $500,000 in exchange for a green card. An affidavit in the case says that some of that money ended up with Christie's Fine Art in London, with Bollen's close personal friend in Georgia and with a collector of Egyptian artifacts. Bollen was known to be an art collector.

Hawks and Williams pointed to the program's troubled past in South Dakota, saying that corruption associated with EB-5 is grounds enough to sunset it. They said a different, better supervised program could emerge.

"We can get rid of a scandal-ridden program," Hawks said. "It is a program that is universally acknowledged as corrupt."

Williams said the program has worked elsewhere, but given the flaws in the South Dakota Regional Center's administration, it should be scrapped.

"I think in South Dakota it absolutely should be eliminated," Williams said. "We don't deserve to have it now."

Hawks is set to challenge Noem in November. Noem's spokeswoman said the Republican believes the program has worked well in some parts of the country, but "Rep. Noem believes it is too often unaccountable and not transparent enough to be renewed as a stand-alone program without reforms."

Thune, who will face off against Williams, said the program has worked in other states and should be reformed if it's to be renewed.

"Sen. (Chuck) Grassley’s proposals, like requiring greater oversight of projects and background checks for regional center and project principals, make a lot of sense and would go a long way in improving the program," Thune said in a statement.

Congress can act to update or amend the program ahead of the September deadline. If no action is taken, at least some of the EB-5 program's facets will expire.