Phil Scott would bring integrity to the governor's office 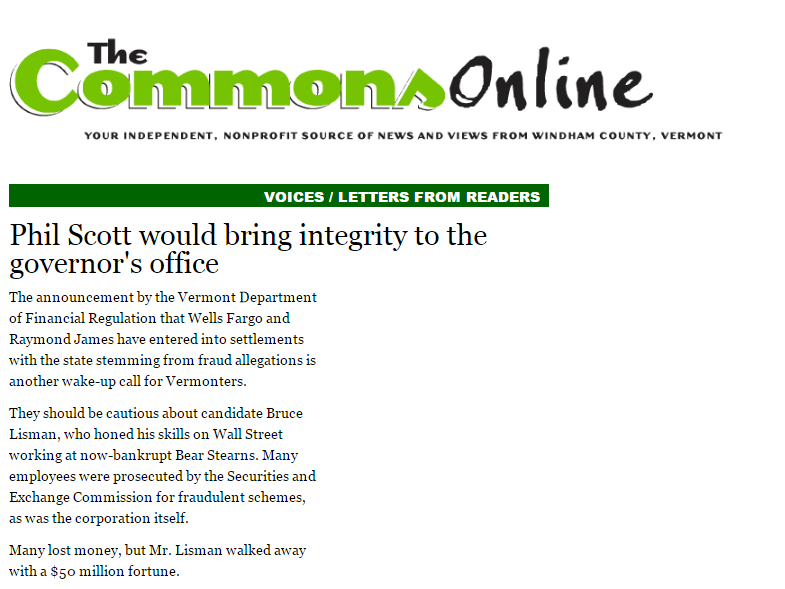 The announcement by the Vermont Department of Financial Regulation that Wells Fargo and Raymond James have entered into settlements with the state stemming from fraud allegations is another wake-up call for Vermonters.

They should be cautious about candidate Bruce Lisman, who honed his skills on Wall Street working at now-bankrupt Bear Stearns. Many employees were prosecuted by the Securities and Exchange Commission for fraudulent schemes, as was the corporation itself.

Many lost money, but Mr. Lisman walked away with a $50 million fortune.

As if Vermont needs any more evidence for concern, Mr. Lisman has yet to explain the campaign contribution he accepted from Richard Harriton, his former colleague from Wall Street who was previously barred by the SEC for involvement in a $75 million fraudulent scheme.

Vermont has been rocked by two large fraud investigations. One involved theft of foreign funds with the EB-5 program, and another alleges health-care fraud of state and federal governments, commercial insurance companies, and hundreds of patients who were denied refunds of their patient credit balances for a decade at the Brattleboro Retreat. These two investigations underscore very clearly why integrity should matter in Vermont now more than in any recent memory.

Lieutenant Governor Phil Scott not only cares about the well-being of all Vermonters but he has also demonstrated over his entire life the inherent trait of doing for others — the hallmark of those who are genuinely motivated by public service.

Bruce Lisman and his campaign of lies, his embrace of fraudsters, and his work on Wall Street while numerous fraudulent schemes were hatched at Bear Stearns and its affiliates, are evidence why he is not the best choice for Vermont.

We need a trusted leader who has an established track record grounded in integrity. We have just wasted two years with the Democratic majority in the Legislature re-electing Governor Peter Shumlin following the narrow outcome in the last election two years ago.

The Vermont Democratic party are collectively responsible for $700 million in new taxes since Shumlin took office six years ago — a fact that illustrates why Democratic candidates Sue Minter, Matt Dunne, and Peter Galbraith have no legitimate claim to the governor’s office in this election cycle.

Indeed, Vermont suffers from an integrity deficit, and Phil Scott will restore it on day one.