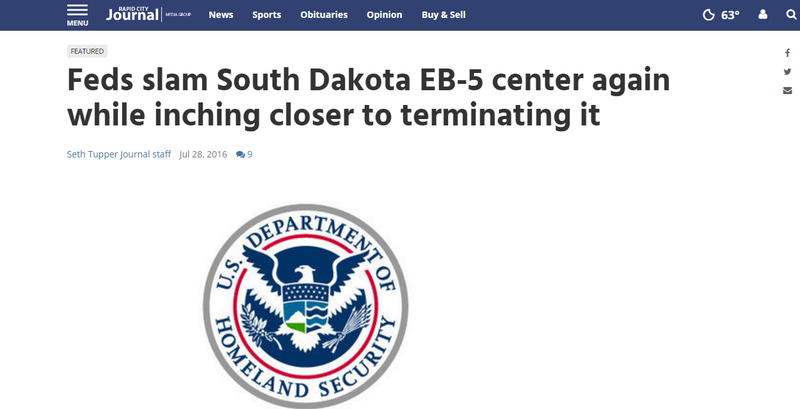 The federal government took another step this month toward terminating South Dakota's controversial immigrant-investor center, referring to the state's attempts to save and defend the program as “unpersuasive,” “erroneous” and “unacceptable.”

The stern language is included in a notice dated July 7. In that notice, U.S. Citizenship and Immigration Services said it had determined — following a previous warning to that effect — that the South Dakota Regional Center’s participation in the federal EB-5 visa program should be terminated.

The termination is not yet final, because the USCIS sent its decision to its own Administrative Appeals Office for a review “due to the complex and novel issues” raised in the case, according to the July 7 notice. That office attempts to resolve appeals within six months, according to the USCIS website.

The grounds for termination, mentioned in the earlier notice of intent and again in the new notice of termination, include the diversion of millions of investor dollars away from intended purposes.

In the new notice, the USCIS says those diversions and other issues "cast considerable doubt on the credibility of the (South Dakota) Regional Center, all of its operations, and its ability to promote economic growth in compliance with the Program.”

The EB-5 program name is shorthand for the employment-based, fifth-preference visa, which is a permanent-residency “green card” offered to foreigners who invest a minimum of $500,000 in job-creating projects in the United States. The investments are handled by dozens of EB-5 regional centers around the country, including the one in South Dakota, which is one of only a few state-run centers.

The South Dakota Regional Center has been mired in controversy and scandal since the October 2013 death of Richard Benda, the former head of what was then called the Department of Tourism and State Development. Benda’s death was ruled a suicide, and it was soon revealed that he had been facing potential prosecution for allegedly stealing state grant money intended for a meatpacking project that received EB-5 funding in Aberdeen.

Further revelations about the state's EB-5 center have since spawned several lawsuits, some changes to state laws and policies, and an ongoing state criminal prosecution of Joop Bollen, the man who ran the EB-5 center first as a state employee from 2004 to 2009 and then as a private contractor from 2009 to 2013.

The USCIS decision to terminate the South Dakota Regional Center comes about nine months after the USCIS issued its notice of its intent to do so. That initial notice listed numerous grounds for termination, mostly predicated on examples of mismanagement by state government, by Bollen and by Bollen’s company, SDRC Inc., which operated the regional center on behalf of the state.

After the USCIS issued its notice of intent to terminate the South Dakota Regional Center in September, South Dakota was given 30 days to offer evidence in opposition.

The state’s evidence was prepared and submitted by a Tennessee law firm, Baker Donelson. The state’s contract with the firm includes billable rates up to $500 per hour with a cap of $75,000 on total payments. The state has so far paid the firm about $22,000.

But the USCIS was not swayed by the firm's arguments or those of SDRC Inc., some of whose correspondence was included with the state's evidence. The July 7 USCIS notice includes a point-by-point takedown of both the state's and Bollen's claims.

In one example, the state Governor’s Office of Economic Development, which has operated the regional center itself since terminating a contract with SDRC, Inc. in 2013, argued that it could not provide missing data to the USCIS because SDRC Inc. has never supplied a complete set of records.

But the USCIS noted that the state had two years from the time it terminated its contract with SDRC Inc. until the USCIS issued its notice of intent to terminate the regional center to get the information.

“This should have been ample time for the State to obtain the relevant records,” the USCIS notice says.

The USCIS rejected all of those arguments while casting doubt on the state’s purported ignorance of the diversions, asserting the state’s responsibility to monitor Bollen and SDRC Inc. and labeling the diversions as impermissible.

While the state has sought to distance itself from Bollen’s handling of the regional center as a private contractor, the USCIS said that “the regional center designation in 2004 was granted to the state of South Dakota, and it has always been the state’s responsibility to ensure monitoring, oversight and due diligence.”

South Dakota Gov. Dennis Daugaard, who was lieutenant governor under then-Gov. Mike Rounds when the alleged improprieties happened, has kept the state’s regional center open to avoid negative consequences for foreigners who made investments through the center. Last year, the state estimated that 270 foreigners were awaiting approval or denial of visas for investments they made through the center. On Wednesday, Tony Venhuizen, chief of staff to Daugaard, said the number has been whittled to 75 or 80.

The USCIS website offers some further perspective on the potential fate of those investors: “An EB-5 investor’s conditional permanent resident status, if already obtained, is not automatically terminated if that individual has invested in a new commercial enterprise associated with a regional center that USCIS terminates.”

Meanwhile, South Dakota’s plan to keep its regional center on life support for the benefit of investors has not impressed the USCIS, which noted that the state “has not fulfilled its monitoring and oversight responsibilities since terminating the SDRC, Inc. contract in 2013 and is unlikely to do so in the future.”