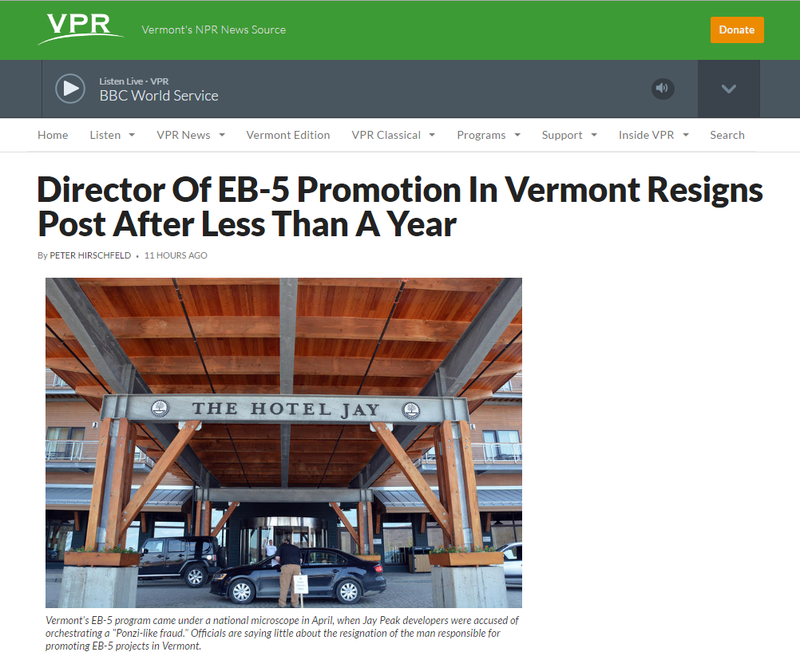 Administration officials are saying little about the resignation of the man responsible for promoting EB-5 Immigrant investor Program projects in Vermont.

Eugene Fullam resigned his post this week after less than a year as head of the Vermont EB-5 Regional Center.

Patricia Moulton, secretary of the Agency of Commerce and Community Development, says she’s unable to elaborate on the reasons for his departure.

“Gene Fullam offered his resignation and I have accepted, he has moved on,” Moulton said in a written statement this morning. “The teams at the Agency of Commerce and Community Development and the Department of Financial Regulation will continue Regional Center business as usual.”

Fullam didn’t immediately respond to an email inquiry this morning.

The EB-5 Immigrant Investor Program is a federal initiative, that allows foreign investors to obtain U.S. visas in exchange for a minimum $500,000 investment in a project that yields a certain number of jobs.

Vermont’s EB-5 program came under a national microscope in April, when the Securities and Exchange Commission accused two Vermont developers of using EB-5 projects in the Northeast Kingdom to orchestrate a “Ponzi-like” fraud on foreign investors.

The Shumlin administration shifted regulatory oversight of the EB-5 program to the Department of Financial Regulation in late 2014, following an SEC inquiry into projects run by Quiros and Stenger.