CiF reports on how EB-5 is working for You, for America

The Flats East Bank project began with the idea to rebuild and revitalize a largely empty section of downtown Cleveland, located along the east bank of the Cuyahoga River. New development was devised and a plan to build a vibrant and livable urban district complete with housing, entertainment & retail destinations, and office space emerged. The combined effect of these new elements near the downtown core that would not only draw tenants to new buildings but help reinvigorate a part of Cleveland suffering from economic stagnation. 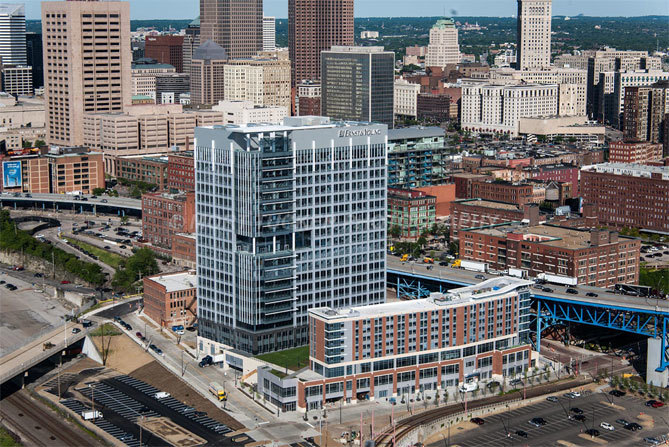 The idea to capitalize on Cleveland’s underdeveloped waterfront is not new per se and the initial plans for the Flats East Bank appeared more than a decade ago. However because of various limiting factors (most notably the 2008 Financial Crisis that destroyed many developers’ access to traditional credit sources) the Flats East Bank seemed destined to remain an intriguing concept of new downtown Cleveland development.

It was only through the combined effort of many public and private entities working as a united front – CiF included among them – that the financing was secured and the project could move forward; construction began in 2010, was completed early in the 3rd quarter of 2013, and the components of the Flats Phase I have been operational ever since.

Though the entirety of the Flats East Bank development includes many parts – such as hundreds of housing units, retail, restaurant and entertainment spaces, and significant infrastructure improvements – the cost of building all these components at once was prohibitively high, so the Flats development was split up into multiple phases.

The first phase of the Flats East Bank consisted of financing and building the following:

Now coming up on two years since construction completion, the office tower continues to serve as both the headquarters for the regional operations of international accounting firm Ernst & Young and is home to several other major office tenants. The office tower was actually integral to Ernst & Young, since the company was considering moving its operations outside of Cleveland. However the office space in the Flats East Bank has given E&Y everything they could need in a downtown facility and they were enticed to stay.

The attached Aloft Hotel allows those working in the office tower to easily host visiting clients for extended stays and the restaurants provide catering services for events. The three restaurants – Ken Stewart’s Bar & Grill, Lago, and Willeyville – all sit street level in the ground floor of the Aloft Hotel building and are native to Northeast Ohio.

So if you want to treat yourself to some amazing cuisine from outstanding local chefs, the East Bank of the Flats is an excellent place to look.