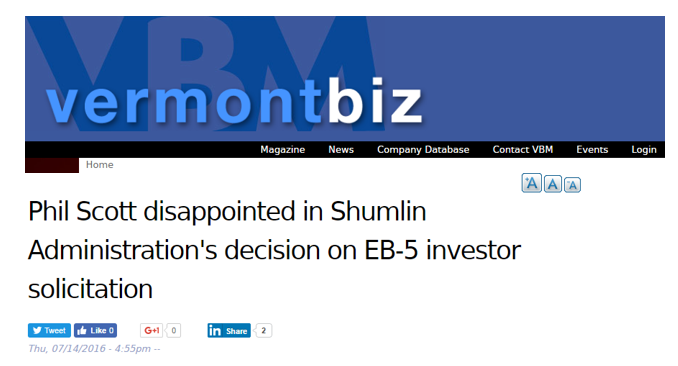 “As a public servant and candidate for Governor, my priorities are growing the economy, making Vermont more affordable and restoring faith and trust in state government," Scott said in a statement. "With proper oversight, the EB-5 program can be a useful tool for stimulating much-needed investment and economic growth in Vermont.

“I was disappointed to learn from Vermont Public Radio’s recent report that the Shumlin Administration enabled the owners of the EB-5 projects in the Northeast Kingdom, who are accused of multiple counts of fraud, to continue to solicit investors for months after the SEC had suspended that permission for Jay Peak.  Even after repeatedly failing to provide compliance information to state regulators, they were allowed to raise more money. By the Administration’s own admission, it was a ‘calculated risk.’  Yet, they've not yet explained why they took this risk or why they allowed the problem to continue to grow.

“Whatever their reasons for allowing the scheme to continue while under federal investigation, the fact that journalists had to dig up this information further undermines faith and trust in state government.

“It also points to the lack of accountability and checks and balances that develop in a system of government controlled entirely by one party.

“In order to grow the economy, we need leaders who will capably and transparently oversee programs and put regulatory responsibility ahead of politics. This is essential to restoring faith and trust in state government, the integrity of Vermont’s regulatory system and the value of this economic development program.”