TSITRIAN: It's time for non-partisan elections 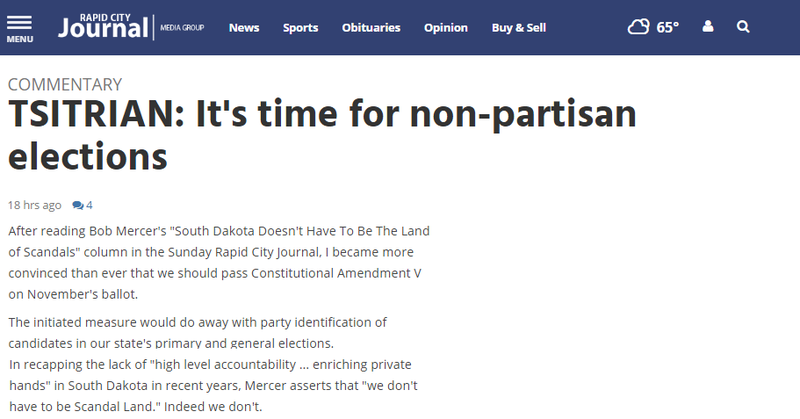 After reading Bob Mercer's "South Dakota Doesn't Have To Be The Land of Scandals" column in the Sunday Rapid City Journal, I became more convinced than ever that we should pass Constitutional Amendment V on November's ballot.

The initiated measure would do away with party identification of candidates in our state's primary and general elections.

In recapping the lack of "high level accountability ... enriching private hands" in South Dakota in recent years, Mercer asserts that "we don't have to be Scandal Land." Indeed we don't.

Readers of my blog will recall that I, along with other prominent bloggers (Cory Heidelberger in Aberdeen comes to mind) in the state, took long looks at the EB-5 ("cash for green cards") fiasco that has so far resulted in one suicide and one felony indictment and found the entire mess to be a story of ineptitude, bad judgement, conflicts of interest and, per the indictment, alleged criminal behavior. As Mercer notes, the same conclusions can be attached to the GEAR UP program involving the mishandling of federal funds intended to be used for assisting Native American students.

I just think we have had a Republican chokehold on state government for too long in South Dakota, so much so that the entire calcified system lends itself to partisan complacency and chumminess.

I remember the state Legislature's Government Operations and Audit Committee's lame attempt at investigating the EB-5 fiasco in 2014. GOAC didn't even insist on a face-to-face meeting with the lead guy in the mess (Joop Bollen), allowing him to provide written answers to written questions instead.

That the attorney general soon found enough evidence to indict Bollen makes you wonder what the not-so-super sleuths at GOAC overlooked during their kids-glove handling of their oversight responsibilities.

The whole debacle occurred in the context of overwhelmingly partisan government, with Republicans dominating the statehouse, the Legislature and the committee itself. When GOAC's EB-5 report came out, the few objecting Democrats were basically ignored. They have since been vindicated by the continuing unraveling and disclosures of the fiasco's details.

I believe that a stronger Democratic presence in the partisan environs of state government would have resulted in much more forceful efforts at uncovering the truth, but that's the way it isn't in South Dakota.

Ergo, my belief that a non-partisan setup — like Nebraska's, which has had non-partisan government since the 1930s — would be a welcome change from the stultifying domination of Republicans in this state.

What Amendment V would create is an opportunity to vote for the person, not the party, in our primary and general elections, which means that elected officials would be free to act independently, without fear of party retaliation — and with the ability to approach agenda items on an issue-by-issue basis.

Given the way that "rage against the establishment" has made such a powerful showing in this cycle's presidential campaigns, many South Dakotans are probably as fed up with political business-as-usual as millions of others across the country. Voting in favor of Amendment V would be an effective way of registering our contempt for the status quo and sending the message that it's time to shake things up.