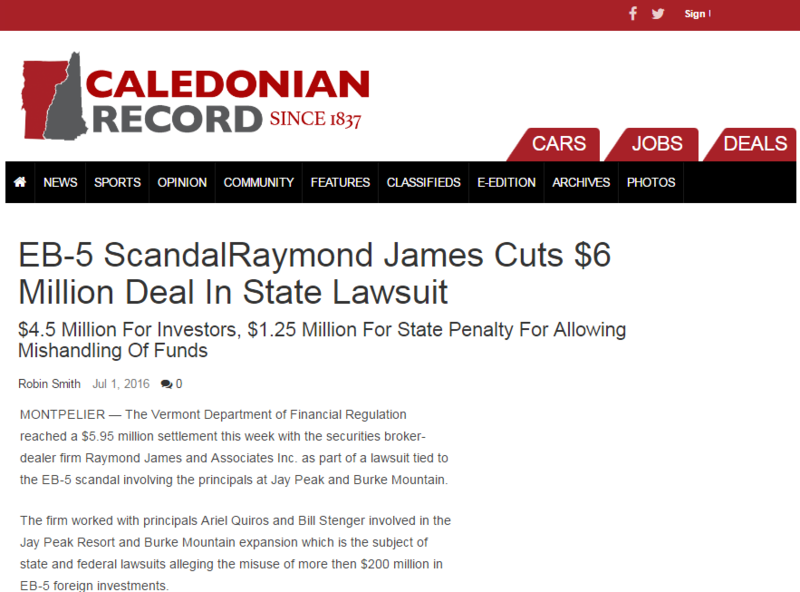 The Vermont Department of Financial Regulation reached a $5.95 million settlement this week with the securities broker-dealer firm Raymond James and Associates Inc. as part of a lawsuit tied to the EB-5 scandal involving the principals at Jay Peak and Burke Mountain.

The firm worked with principals Ariel Quiros and Bill Stenger involved in the Jay Peak Resort and Burke Mountain expansion which is the subject of state and federal lawsuits alleging the misuse of more then $200 million in EB-5 foreign investments.

In April, DFR filed a civil lawsuit in Washington Superior Court at the same time that the U.S. Securities and Exchange Commission filed lawsuits in U.S. District Court in southern Florida.

Quiros is also accused of taking $50 million for his personal use, according to the SEC.

A federal court-appointed receiver, attorney Michael Goldberg of Florida, was granted control of operating and selling Jay Peak and Burke Mountain resorts and other properties to repay investors, creditors and contractors.

DFR, the SEC and Goldberg allege that Burstein at Raymond James moved money in an eight-year Ponzi-like scheme for Quiros.

As the result of its investigation of securities concerns in connection with the sale of interests in Vermont limited partnerships tied to Jay Peak-related EB-5 projects, DFR found multiple instances of non-compliance with supervisory requirements and Vermont law, DRF Commissioner Susan L. Donegan announced Thursday.

DFR’s jurisdiction over Raymond James and its registered representatives is based on the licenses they hold to conduct the business of securities in Vermont.

Under the agreement, Raymond James and Associates will pay $4.5 million to the appointed federal receiver in the case SEC v. Quiros for the purpose of reimbursing possible claims by investors.

In a statement to investors on his website www.jaypeakreceivership.com, Goldberg said he “will hold the funds in trust until a formal claims process can be undertaken and approved by the court.”

Goldberg stated he will notify the investors later on how to file a claim for their share of the $4.5 million.

Donegan said she is pleased to see this settlement because it recovers some of the EB-5 investors’ money.

“DFR’s responsibility is to ensure that Vermont’s securities laws are followed, and that investors are protected,” she said.

“Since the SEC’s seizure of the Jay Peak-related EB-5 projects, investors have been rightly concerned about possible recovery of funds. This settlement contributes to their restitution.”

Donegan said this activity originated from a Miami branch office of Raymond James and emphasized that none of the company’s Vermont offices or any Vermont individual salesperson or advisor participated in any improper activity in connection with this enforcement matter.

In the settlement filed in Washington Superior Court Wednesday, Raymond James and Associates agreed to cooperate with state officials at DFR, providing evidence and other materials. The firm implemented changes to its practices and waived any right to a hearing or appeal.

Raymond James and Associates agreed to the settlement without admitting or denying the allegations by DFR, according to the court document.

In the order, Quiros is said to have opened brokerage accounts and margin accounts at Raymond James and Associates and other limited partnerships.

Raymond James and Associates “failed to obtain adequate documentation establishing Quiros’ authority to act on behalf of the limited partnerships,” the order states.

The person overseeing the accounts at Raymond James knew that the foreign investors’ money was shifted from account to account, and used as collateral for short-term treasury bills, the order states.

On June 23, 2008, Quiros used the money in the accounts to buy Jay Peak Resort despite written instructions advising they could not be used for that purpose, the order states.

The lawsuit by Goldberg alleges that investors “who invested in these limited partnerships thought they were investing their funds in hotels, cottages, a biomedical research facility and other projects. In reality, while some of the funds were used for the projects, the majority of the funds were co-mingled, misused, and diverted to pay for other projects and to cover Quiros’ personal expenses …”

Goldberg states that once the funds went into the Raymond James accounts, “Quiros alone directed use of the funds.”