Editorial: Hydro Deal Too Much for Vermont 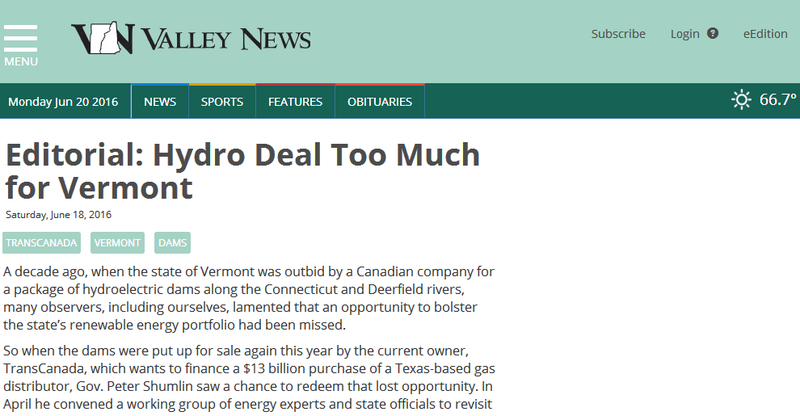 A decade ago, when the state of Vermont was outbid by a Canadian company for a package of hydroelectric dams along the Connecticut and Deerfield rivers, many observers, including ourselves, lamented that an opportunity to bolster the state’s renewable energy portfolio had been missed.

So when the dams were put up for sale again this year by the current owner, TransCanada, which wants to finance a $13 billion purchase of a Texas-based gas distributor, Gov. Peter Shumlin saw a chance to redeem that lost opportunity. In April he convened a working group of energy experts and state officials to revisit the possibility of the state acquiring the 13 hydroelectric stations, now valued at between $750 million and $800 million. Last week a Department of Public Service memo surfaced deeming it highly unlikely that the state could pull off an acquisition on its own, given the time constraints and regulatory hurdles involved.

“It’s very clear that we cannot, nor should we try to, do this on our own,” said Public Service Commissioner Chris Recchia.

To which we can only say, Whew, that was close.

It’s not that there wouldn’t potentially be a big upside to the state owning the dams, including the opportunity to secure a reliable supply of renewable energy while generating revenue for the state through power sales. But if the last few years have demonstrated anything, it is that Vermont state government is simply not up to the task of managing major undertakings. In fact, it is suffering from a crisis of competence. The Vermont Health Connect website, on which millions of dollars were squandered to little effect, is but one example. Lack of effective government oversight is implicated in the EB-5 development debacle in the Northeast Kingdom. And the much-touted move to a universal health insurance system proved illusory when the Shumlin administration finally crunched the numbers.

Moreover, a purchase from TransCanada would involve a lot of moving parts that would have to be bolted into place. Maintenance costs, local tax impacts, the future of wholesale energy prices and the state’s debt capacity would all have to be accurately assessed, along with the current and projected revenue stream. Not a simple thing.

So we are not thinking that Vermont is well positioned to get into the hydroelectric business on its own. As many do-it-yourself homeowners have discovered to their profound regret, electrical work is something best left to the pros. Fortunately, the memo produced by a Department of Public Service official noted that that’s also an option. The state could forge a partnership to “acquire some beneficial interest” in the dams or negotiate a favorable long-term power purchase agreement with the eventual buyer.

Mary Powell, CEO of Green Mountain Power, seemed to anticipate some such arrangement during an editorial board meeting at the Valley News in May. She said then that GMP had met with other Vermont utilities to talk about the dams, but they were deferring to the working group. But Powell noted that the utilities could step forward to “complement the state’s effort or to provide a different alternative if the state’s not interested.”

That appears to us to be a far more responsible course of action than striking out alone in uncharted waters.