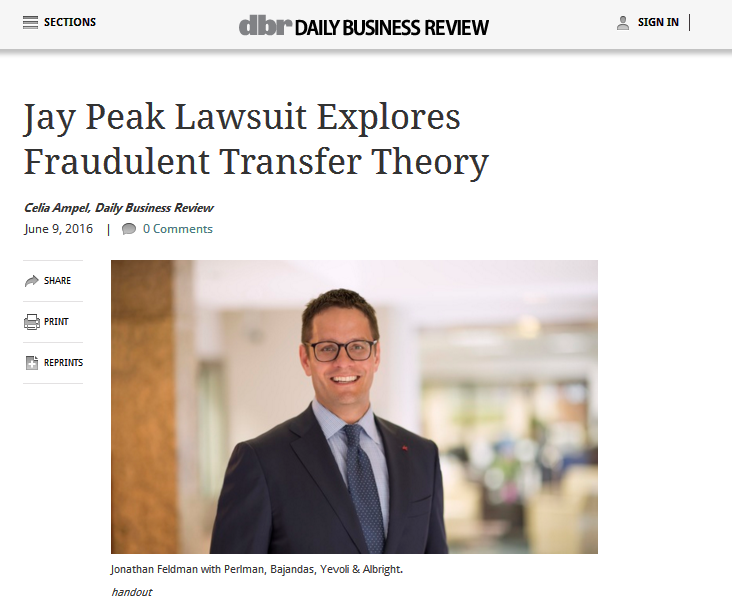 A new lawsuit in the Jay Peak saga uses a legal theory that plaintiffs counsel says is untested in Florida state court: If a financial institution touches money, even for a second, it must try to make sure it isn't being used for fraud.

Jonathan Feldman of Perlman, Bajandas, Yevoli and Albright in Miami filed the case June 3 against Raymond James Financial Inc. on behalf of several immigrant investors in the Jay Peak projects in Vermont, which included ski resort improvements and a biotech plant.

Jay Peak owner Ariel Quiros of Key Biscayne and his business partner, Bill Stenger of Vermont, allegedly diverted $200 million of investor funds, including $50 million for Quiros' personal benefit, according to the Securities and Exchange Commission.

The pair raised about $350 million through the EB-5 program, which allows foreigners to invest $500,000 in U.S. job creation in exchange for a visa.

The pair's Raymond James accounts were managed by Joel Burstein, Quiros' then-son-in-law, and Burstein did not stop funds from being "misused from day one" even though he knew the money was for EB-5 investment purposes, Feldman said.

Raymond James declined to comment on the allegations Thursday.

Feldman's case is one of a handful of Jay Peak investor lawsuits against Raymond James.

The receiver for the Jay Peak companies, Michael Goldberg of Akerman in Miami, filed a complaint against the investment firm May 20 in Miami federal court. The claims include fraudulent transfer, aiding and abetting a breach of fiduciary duty and violations of the Racketeering Influenced and Corrupt Organizations Act.

Another federal lawsuit filed May 3 by Coral Gables attorneys with Kozyak Tropin & Throckmorton makes similar allegations, but as a class action.

"The real difference with our lawsuit is that we are utilizing a fraudulent transfer theory that hasn't ever really been used in state court, to my knowledge," Feldman said.

The fraudulent transfer theory says that any company that holds money at any point in a transfer can be held liable if that money is used fraudulently. Quiros transferred interest fee and cost payments from the Jay Peak companies to Raymond James, according to court documents.

"Raymond James touched the money for an infinitesimal second, but they touched it," Feldman said.

In federal court, banks often use the "mere conduit" defense, which is "a practical recognition that banks touch money all the time, and they're not obligated to understand what the purpose of that money is," he said.