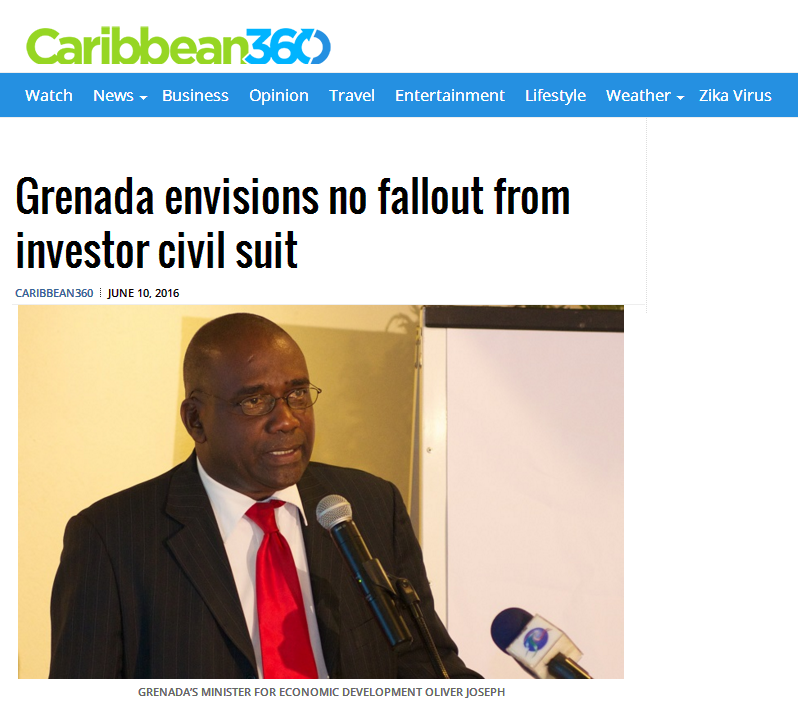 The Grenada government says it doesn’t expect any fallout from the civil charges brought against an investor who acquired citizenship under the country’s Citizen By Investment (CBI) programme.

Civil charges have been brought against Charles Liu by the Securities and Exchange Commission (SEC) in the US. The investor, who had committed to a multi-million dollar tourism project in Grenada in September last year, has been charged with violating anti-fraud laws in the US and has had his assets frozen.

But Minister for Economic Development Oliver Joseph says the civil matter has nothing to do with the CBI programme.

At the same time, he said the administration is working closely with the US government and other stakeholders in the matter.

And Joseph says while it is unlikely it will become a criminal indictment, Grenada will take whatever action is deemed necessary if that time comes.

“If at any time criminal charges are brought against Mr. Liu, then we will move to take the appropriate action, as we would do in any other situation where you have investors who have been issued with Grenadian documents,” the minister said.

The SEC has accused Liu and his female partner of running a visa scheme in which they misused two-thirds of the US$27 million raised from dozens of Chinese investors seeking visas. The funds were to be invested in a cancer treatment facility, a project that would have helped Chinese investors obtain permanent US immigration visas under a federal program known as EB-5, but the money was reportedly transferred to three firms in China, including one in which Liu is chief executive and chairman. Some US$7 million allegedly also went into the couple’s personal accounts.

Liu is one of the major investors in the proposed US$2 billion Mt. Hartman Project in Grenada, which will develop the Mt. Hartman peninsula and Hog Island and feature high-end resorts, a wellness center, and recreational and other entertainment features.

Joseph says the project will go ahead.

“We have been assured by the other investors in the programme that it will continue because they think the project has great potential,” he said.