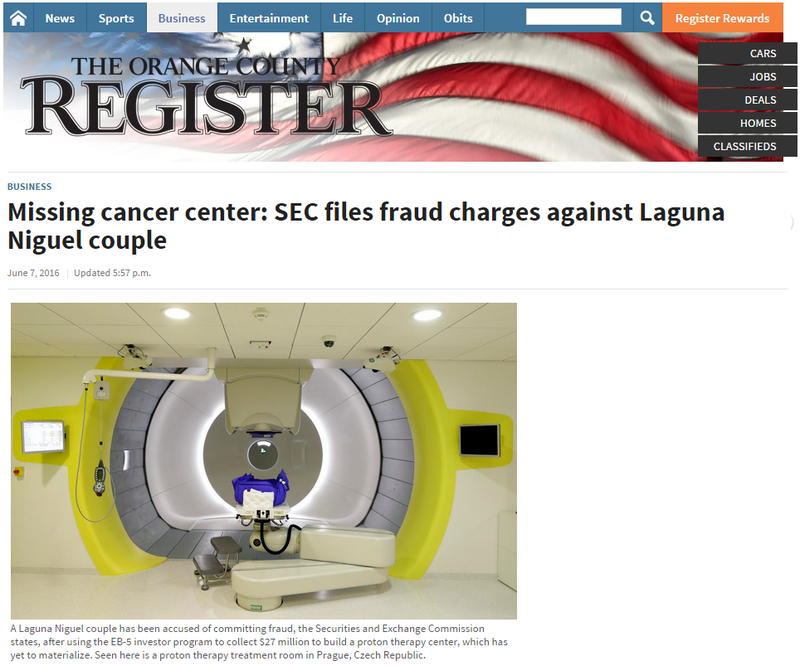 The Securities and Exchange Commission has filed fraud charges and frozen the assets of a Laguna Niguel husband-and-wife team accused of misusing money raised for a cancer treatment center.

The couple in promotional materials said the project would create more than 4,500 new jobs across the region and have a substantial impact on the local economy while giving foreign investors an opportunity for future U.S. residency, the SEC stated.

The couple’s proton center project was conceived using the EB-5 program, in which immigrants can get a green card for themselves and their families if they invest at least $1 million and create 10 or more jobs – or at least $500,000 if the project is in a high-unemployment area.

Attempts to contact Liu and Wang have been unsuccessful.

After more than 18 months of collecting investments, there was no sign of the proton center. Liu, the SEC stated, instead had transferred $11 million to three firms in China and diverted another $7 million to his and his wife’s personal accounts.

Proton therapy supporters say the expensive radiation technology is more precise in targeting tumors and safer for healthy tissue than conventional X-rays, especially for some pediatric cancers. Critics say the technology has not been proven better than cheaper alternatives for some cancers, the Washington Post reported.

Experts generally agree, the Post wrote, that the therapy’s greatest potential is in treating children, particularly those with brain and eye tumors, because the therapy can be administered at higher doses than conventional radiation and causes fewer long-term side effects.

A district court order prohibits the couple from raising any more money from investors or spending the remaining funds. The SEC’s complaint names Liu and Wang along with the companies behind the EB-5 project: Pacific Proton Therapy Regional Center, Pacific Proton EB-5 Fund, and Beverly Proton Center LLC.The SEC is seeking repayment of ill-gotten gains plus interest and penalties.

The Government Accountability Office last year found foreign investors had been victims in dozens of fraud cases under the EB-5 program. Immigrant investors, the report said, “may be vulnerable to fraud schemes because they may be primarily focused on obtaining their visas.”