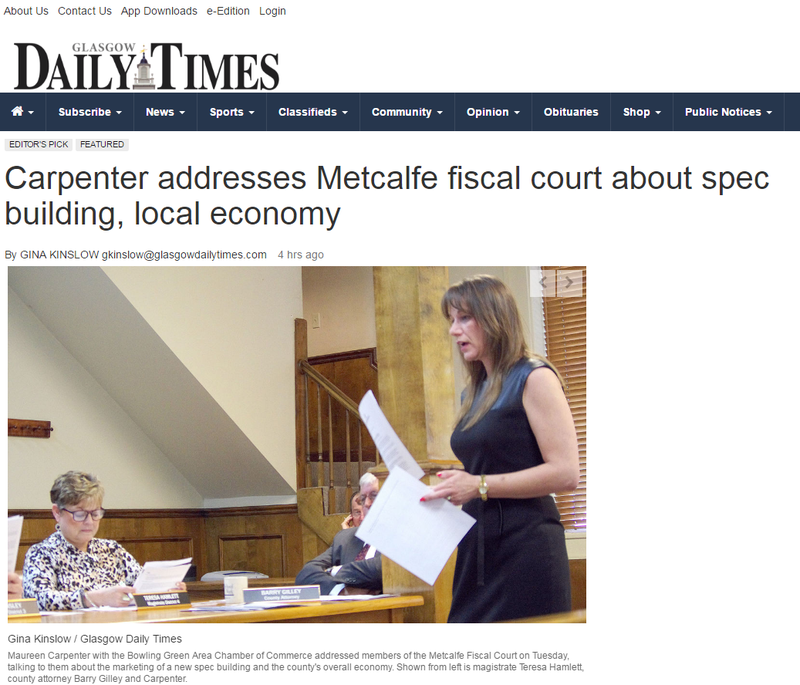 Prior to a groundbreaking for the new spec building at the Metcalfe County South Industrial Park on Tuesday, Maureen Carpenter with the Bowling Green Area Chamber of Commerce spoke to members of the Metcalfe Fiscal Court about the project.

Work for the construction site has already begun and the building will be delivered in early June, she said.

A significant amount of marketing has already begun for the building.

“We have been fortunate as of late. We submitted four RFIs for projects. That is a request for information. They typically come in from TVA, the state or a site consultant. Since January, we have responded to four,” she said.

“They are looking for 30 to 50 acres, so we actually submitted much more than the spec building,” Carpenter said. “We actually included some additional land with that.”

The smallest one involves a company that is looking for 50,000 to 100,000 square foot warehouse space.

Carpenter told magistrates she anticipates it taking about two months before hearing anything about the requests for information.

“Sometimes these take a while,” she said. “We will keep the board up to date on that.”

Carpenter has also been sharing information about the spec building at trade shows, which has resulted in two site visits.

“We have 112 actual leads that we are working. These are people we are talking to who may or may not have a project within the next 12 to 24 months,” she said.

She continued she had two calls last week about projects she has been working with for two years.

“They called back this week and are actually coming to Bowling Green. They are looking for 60,000 square feet. We will be talking to them about your building as well,” she said.

Carpenter told magistrates the Bowling Green Area Chamber of Commerce has signed an agreement with the Bluegrass International Fund, which is a regional EB-5 center. The EB-5 Program was created to help stimulate the U.S. economy by helping internationals get visas for their families to live and work in the U.S.

She is also working with existing regional industries about their needs to see if Edmonton might be a fit for them, and continues to meet with officials of existing Metcalfe County companies.

“I try to meet with the existing industries at least once every six months. I'm also talking with them on the phone, if they need anything, just checking in,” she said. “Again, the No. 1 concern is workforce, particularly in the textile industry with Carhartt and Topps.”

Carpenter explained officials with those companies have said they have a hard time getting young people interested in doing that kind of work.

She also gave magistrates an economic overview of the county, and in doing so she pointed out that the county's unemployment rate is 5.4 percent, which she said is pretty consistent with the region.

“This is actually a good number when you are trying to market a facility,” she said.

Carpenter also talked about the 16 and older labor force.

“Participation rate is about 54.2 percent, so that means of people who are 16 to 24 who are working age, 54 percent of them are working,” she said.

Carpenter plans to talk to local school officials, as well as students, about what occupations are available in southcentral Kentucky, how much education they need, what positions will be available when they graduate and what wages they should expect.

“What we are finding … when you are looking at the occupations, the required education for most of our jobs require a high school diploma, a GED or some other form of technical certification and not necessarily a bachelor's degree or an associate's degree,” she said. “... The people who are actually holding those jobs, actually have their bachelor degrees, so we are over-educating for the positions that we have.”

“Right now, I think all of our factories are financially sound and are doing very well,” he said, adding he heard an advertisement for help needed at a local lumber company. “Any time they are hiring ... is a good thing.”

As for the contacts Carpenter is making in an effort to locate a tenant for the new spec building, Wilson said, “I'm hoping TVA will help since they have a vested interest in that building. I'm hoping they will make contacts for people to locate there, and hopefully, we can get somebody in here in a short time.”

“Hopefully, it's going to get better,” he said.

Once the spec building is constructed, Scott said “... at least we will have somewhere to go if somebody wants to come here. You've got to be ready when they come.”