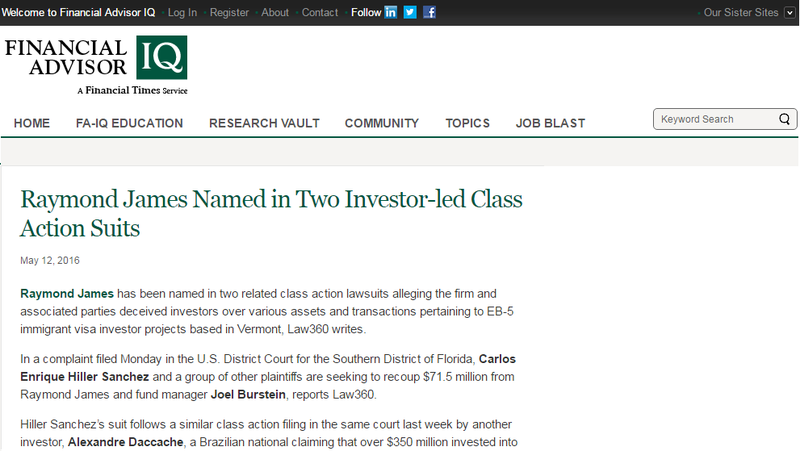 In a complaint filed Monday in the U.S. District Court for the Southern District of Florida, Carlos Enrique Hiller Sanchez and a group of other plaintiffs are seeking to recoup $71.5 million from Raymond James and fund manager Joel Burstein, reports Law360.

Hiller Sanchez’s suit follows a similar class action filing in the same court last week by another investor, Alexandre Daccache, a Brazilian national claiming that over $350 million invested into an EB-5 program never made it into the target investments, but instead was paid into other projects and lined the pockets of co-defendant Ariel Quiros, the owner of Jay Peak, a ski resort in Vermont, according to Law360.

The EB-5 visa program is designed to reward foreign nationals with U.S. permanent residency green cards as a result of investing in projects that create jobs.

Hiller Sanchez alleges the firm and Burstein violated the SEC Act of 1934, and assisted in fraud and a fiduciary breach, Law360 writes.

The Hiller Sanchez suit further claims Burstein and Raymond James participated in “duping and defrauding” the investors through the falsification of associated business plans and limited partnership agreements, and acted with “severe recklessness” as to whether the representations were misleading or false, Law360 writes.

In particular, lawyers for Hiller Sanchez assert in their complaint that Raymond James and Burstein knew funds slated for the target investment vehicle were actually being misused, yet instead of attempting to report or rectify the situation the defendants instead constructed and implemented a “fraudulent financial structure,” Law360 reports.

In his suit, Daccache accuses Raymond James of providing margin loans to Quiros, and that the loans were collateralized with EB-5 investor assets, the Burlington Free Press reports. Attorneys for Daccache are therefore asserting that plaintiff funds were “misused, commingled, and stolen" by Quiros and Jay Peak CEO William Stenger "with the assistance of Raymond James and Burstein,” the Burlington Free Press reports.

The suit also accuses the defendants of violating the Racketeer Influenced and Corrupt Organizations Act, the newspaper writes.

“The members of the RICO enterprise had a common purpose: to increase and maximize their profits by illegally diverting funds that they knew belonged to investors for improper and unauthorized purposes," the complaint says. "The Defendants shared the bounty of their enterprise by sharing the illegal profits generated by the joint scheme."

Daccache’s suit comes on the heels of an SEC fraud case against Quiros and Stenger.

The financial regulator has accused the pair of misappropriating $200 million of the project funds in a “Ponzi-like fashion.”

The SEC alleges Quiros used the money for personal expenses and to cover losses in unrelated businesses, reports the Burlington Free Press.