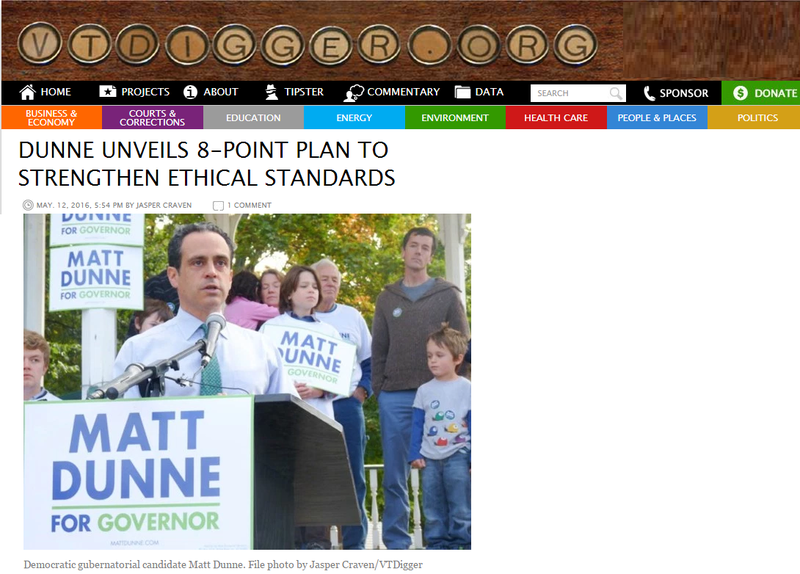 “Trust is the foundation that allows us to continue building on our legacy of progress, and when that foundation cracks — when people lose trust in their government, when they stop believing government has their interests at heart — progress grinds to a halt,” Dunne said in a press conference at the Statehouse.

“Make no mistake,” Dunne continued, “that foundation here in Vermont is cracking.”

Vermont lags behind many other states in its oversight measures for state government. Unlike other states, Vermont has no ethics commission, few financial disclosure requirements and allows direct corporate contributions to candidates. A 2015 state accountability assessment conducted by the Center for Public Integrity gave Vermont a D- for its lack of checks on power, ranking it 37th in the nation.

Dunne’s proposals would, among others things, require monthly campaign finance disclosures, strengthen Vermont’s public financing system, create an ethics commission and institute a two-year “cooling off period” before former politicians are allowed to enter the world of lobbying.

“We still have good intentions and noble ideas,” Dunne said. “But we need to do some work on the foundation of our government before we can act on any of them.”

Gov. Peter Shumlin and U.S. Sen. Patrick Leahy received campaign contributions from Quiros and Stenger, and both wrote letters of support for one of the projects as part of a packet given to investors.

Dunne said better oversight and stronger ethical rules might have prevented both the EB-5 scandal and McAllister’s alleged abuse of a Statehouse intern.

Brittney Wilson, Scott’s campaign manager, said Thursday that the bidding process was transparent because it was overseen by the governor’s office, the Vermont Attorney General and other agency heads.

“He’s done a great job making sure that his company’s process is transparent and follows the required protocols,” Wilson said.

Dunne, who returned more than $16,000 in direct corporate contributions in March, called on the other gubernatorial candidates to follow his lead.

Former Transportation Secretary Sue Minter, another Democrat in the race, announced in a press release shortly after Dunne’s remarks that she would be returning all of her corporate contributions by the end of the week, totalling $11,055.

“Whether you are a multi-millionaire or a major corporation, you shouldn’t be able to buy the governor’s office,” Minter said.

Wilson said Scott would not be returning his corporate donations.

“Phil has support from small and large businesses in Vermont,” she said. “We plan on keeping those contributions.”

Shawn Shouldice, Lisman’s campaign manager, said the campaign would not return its corporate donations, but said “we continue to evaluate them as they come in” in case any inappropriate contributions are made.

In another call to action, Dunne said Thursday that all gubernatorial candidates should abstain from self-funding campaigns. The comments were a thinly veiled jab at Republican Bruce Lisman who, according to financial disclosures from March, has sunk more than $450,000 of his own money in his run for governor.

“A single individual pouring hundreds of thousands of dollars into their own campaign erodes the public trust and directly contradicts the ideal of one person, one vote,” Dunne said.

“He’s had more positive feedback, because they think he must really want this job if he is willing to put his money where his mouth is,” Shouldice said. “We haven’t found it a problem at all.”

Former state Sen. Peter Galbraith, who has more than $18 million in assets, [jumped into the gubernatorial race] after the first March reporting deadline and has not yet disclosed spending or fundraising details.

On Thursday, Galbraith rejected the notion that he would be self-funding his campaign, adding that he had never accepted corporate contributions.

“I haven’t said I’m going to put a penny of my money in,” he said. “I’m out raising money. It’s certainly possible that at some point I will make a loan to the campaign.”

Galbraith added that even if he loans himself money, “Obviously anybody who’s putting their own money in is beholden only to themselves.”

Galbraith said he thought primary spending in Vermont was already out of control. He said that both Minter and Dunne had not responded to his public and private calls for setting a limit on spending the primary.

“Candidates are spending too much time calling up friends for money, not meeting voters,” Galbraith said. “Why should this be an arms race of cash?”

While Galbraith openly criticized Shumlin’s role in the EB-5 scandal, Dunne was more restrained. The former Google executive carefully crafted his excoriation of the lax ethical standards in the state so as not to indict past actions of prominent Democrats.

He wouldn’t directly answer whether Shumlin had contributed to the erosion of trust in state government, and did not offer an answer on whether the Vermont Democratic Party should return past donations made by Quiros and Stenger.

And while Dunne was critical of corporate contributions and Super PACs, he didn’t say he would shun outside national money that could pour in from groups like the Democratic Governors Association in the general election.

“I am not going to take corporate contributions, directly,” Dunne said. “I feel like my campaign can stand on its own.”