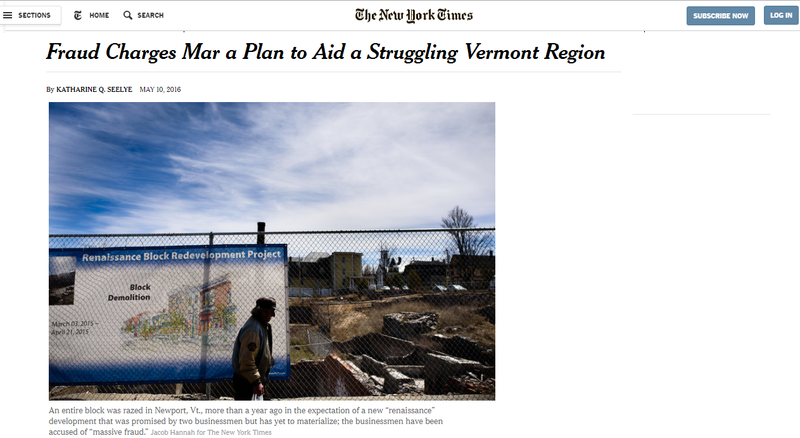 Jo-Ann Brooks grimaced as she looked out the window of her jewelry store in this tiny town in northern Vermont, near the Canadian border. Across Main Street, an entire block of shops and apartments was razed more than a year ago in the expectation of a new “renaissance” development that has yet to materialize. In its place is a gaping hole, with old concrete cellars.

“We call it Little Beirut,” Ms. Brooks said. “It looks like it was bombed.”

The hole is a visual monument to the failed plans of two ambitious businessmen who vowed to revitalize this struggling region, known as the Northeast Kingdom. With an $850 million dream, they promised the biggest economic development in Vermont history. They planned to finance it through a federal program that allows wealthy foreign citizens to invest $500,000 in projects in distressed areas in return for green cards, leading to permanent residency in the United States.

Instead, the two have been accused of perpetrating the biggest fraud in Vermont history — as well as in the history of that federal visa program, known as EB-5.

The businessmen, Ariel Quiros and William Stenger, raised $350 million through the EB-5 program from hundreds of foreign investors from at least 74 countries. The money was intended for an array of projects, including a ski resort, hotels and a biotech research firm. Instead, according to a 52-count civil complaint filed last month by the federal Securities and Exchange Commission and a 15-count civil complaint filed by the State of Vermont, they engineered a “massive eight-year fraudulent scheme” in which they “systematically looted” millions of dollars out of the foreign investors.

The complaints said the two used a “Ponzi-like” scheme to divert $200 million intended for future projects into a dizzying swirl of fraudulent accounts set up to try to keep earlier projects afloat. Some were completed, others were not. In addition, Mr. Quiros was accused of siphoning off $50 million for his personal use, which included buying a luxury condominium in Trump Place New York.

The S.E.C. said the two left a trail of debt. Their actions have jeopardized the immigration status of their investors, who are already in the United States, and have thrown into doubt the future of the visa program. And they have left the promise of a revitalized Newport unfulfilled, having failed to rebuild the “renaissance” block on Main Street, the biotech firm and a hotel, marina and conference center. 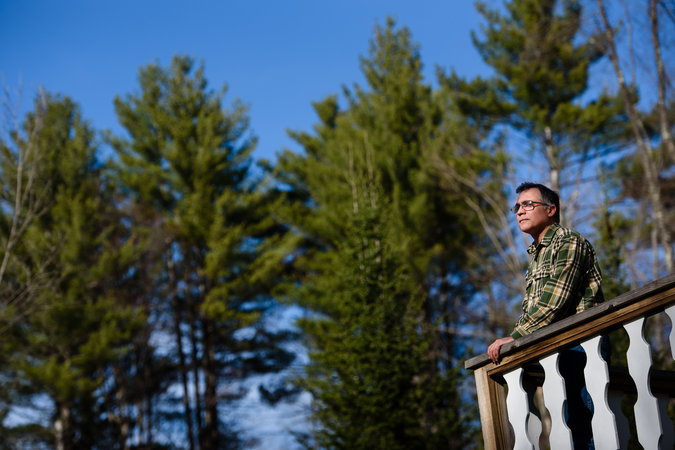 Beyond that, the state’s top officials, including Senators Patrick J. Leahy and Bernie Sanders and Gov. Peter Shumlin, supported and promoted the program. Mr. Leahy and Mr. Shumlin have said they felt betrayed; Mr. Sanders has not commented.

In court papers, Mr. Quiros, 58, of Key Biscayne, Fla., and Mr. Stenger, 66, of Newport, denied the allegations. And in an interview, Mr. Stenger defended the work that has been finished, like parts of a high-end ski resort at nearby Jay Peak, and expressed regret about what remains unfinished, notably the biotech firm. A federal court has appointed a receiver to take possession of all property and assets, which he may sell off.

The allegations against Mr. Stenger particularly stung people here because they had known him for decades as a friend and civic-minded neighbor. He was not accused of siphoning money for his personal use, but the S.E.C. said he “extremely recklessly ceded control of investor funds to Quiros” and “did almost nothing to manage investor money, even when confronted with red flags of Quiros’ misuse.”

In an email interview, Mr. Stenger said he could not discuss the specific allegations against him. But in his most extensive comments yet on the situation, he said he knew he had let people down.

“Betrayal is a strong term, and I understand the disappointment because I’m terribly disappointed not to be able to finish the work I started,” he said. Still, he said, the projects have generated 6,500 direct and indirect jobs of the 10,000 he promised for rural Orleans County, the poorest in the state. He estimated that 650 of nearly 800 investors already have or would get their green cards.

“I’m terribly upset that some of these folks could be at risk,” he said, adding that he was seeking to make them financially whole.

He said his “biggest heartbreak” was the failure to build the biotech firm, called AnC Bio, which the S.E.C. said was “nearly a complete fraud.”

“The community of Newport was fully supportive, and I feel I’ve let them down,” Mr. Stenger said.

Mr. Leahy, a longtime Stenger backer, has been one of the biggest supporters of the EB-5 program, seeing it as an important tool for economic development. Indeed, it is working successfully in other projects in Vermont. But because of fraud in the program elsewhere, he was already pushing for an overhaul. Now, he says unless fundamental changes are made, “EB-5 will die, and it should die.”

Mr. Shumlin deflected questions about whether state officials, by participating in the marketing campaign and not being skeptical sooner, bore some responsibility for the fraud. Until 2014, one state agency was responsible for both promoting the EB-5 program and regulating it. In addition, according to VTDigger, an online news organization, Mr. Shumlin accompanied the developers abroad to recruit investors and appeared in a promotional video for Mr. Stenger in which he said the projects were audited, though they were not; Mr. Shumlin has said that he misspoke regarding the audit and the video was taken down.

“There isn’t a human being on this earth, when you go through a disappointment like this, that doesn’t ask, ‘Couldn’t something have been done to find this sooner?’ ” Mr. Shumlin said in an interview. “We all wish the answer were yes, we all wish we got subpoena power to look at accounts earlier. But there was no reason to believe that what the developers were representing wasn’t true.”

But others say the state was lax in pursuing hints of trouble, in part because officials trusted Mr. Stenger and had high hopes that the development could stimulate the economy. 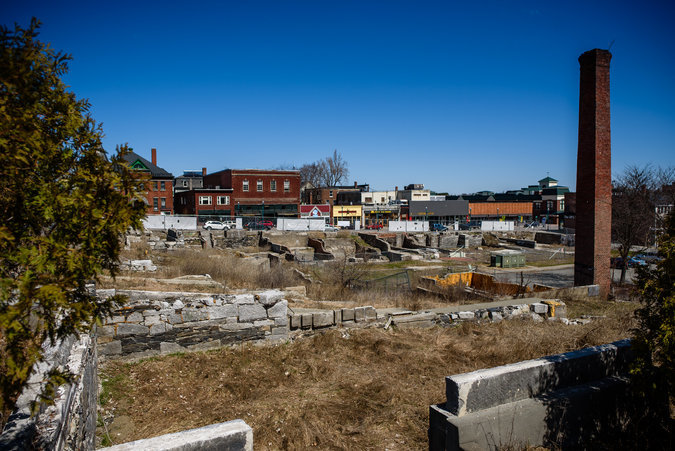 Michael Gibson, an EB-5 financial adviser based in Florida with USAdvisors, which specializes in risk analysis and due diligence on EB-5 investments, shared emails with The New York Times showing that he, for one, had raised questions with state officials as early as 2009.

“I didn’t know there was a Ponzi scheme or fraud,” Mr. Gibson said. “But I had suspicions that they couldn’t repay their initial investors and that they were taking investor money to pay for ongoing operations. And everyone told me to bug off.”

Many of the immigrant investors — about 400 of whom do not yet have permanent residency feel stranded, financially and because they could face deportation. One has already filed a class-action suit.

Mohammed Adil, 49, an Indian who runs a fashion retail company and who wanted his four daughters to be educated in the United States, said he invested $550,000 in Jay Peak in 2012.

“I thought, if the government is giving out visas, there must be checks and balances on this program,” he said. “Now we have ended up in the soup, our money is probably gone and our green card is in trouble.”

Similarly, Felipe Vieira, 50, a financial analyst who moved his family to Vermont from Brazil in 2013, invested in townhouses at Jay Peak that are half finished. His chief concern is staying in the United States.

“Going back would feel like an enormous personal failure,” he said.

Even as they contemplate financial losses, some investors said they might put more money into the unfinished projects; creating at least 10 jobs is a condition of obtaining a green card.

“The investors don’t want to liquidate; they want these jobs to continue so they can get their green cards,” Mr. Shumlin said. Noting that Jay Peak plans to stay open and pay its employees, he added, “In two years, this will look like a bump in the road to good jobs and great resorts.”