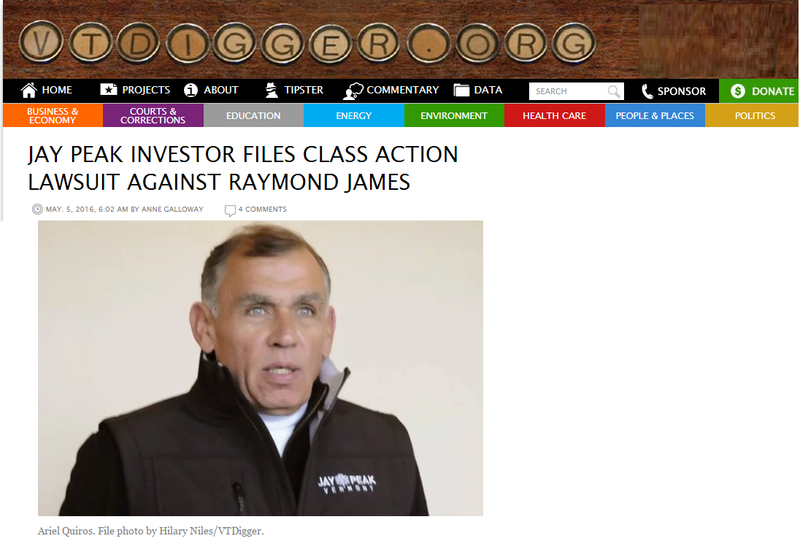 An investor in a hotel at Jay Peak on Wednesday filed a class action lawsuit against Raymond James Financial in Miami federal court.

Alexander Daccache, the plaintiff, alleges that the financial services company “aided and abetted” the developers of Jay Peak Resort in the diversion of $200 million in immigrant investor funds.

Daccache, of Brazil, is an investor in the Penthouse Suites project, which is part of the Hotel Jay. He invested $500,000 in the project as part of Vermont’s EB-5 program in August 2010.

The bank, according to the lawsuit, allowed Quiros to create “an intricate web of transfers among various accounts at Raymond James to disguise the fact that most of the seven projects were either over budget or experiencing shortfalls.”

“These shortfalls were due in large part to Quiros’ theft of tens of millions of dollars of investor money for his own use,” Daccache’s attorneys write.

The Securities and Exchange Commission and the state of Vermont last month accused Quiros of running a “Ponzi-like scheme” and using $50 million in immigrant investor funds to pay taxes, buy two New York City apartments and finance the purchase of Jay Peak and Q Burke resorts. He also borrowed tens of millions of dollars in margin loans against investor accounts, according to the SEC.

Quiros and Stenger solicited $350 million from more than 700 investors from 74 countries. The immigrant investors put up $500,000 each in exchange for a visa, green card and eventual permanent residency in the United States. Many investors say the Jay Peak developers were told to expect a return of their investment after five years.

The investments named in the SEC lawsuit included six projects at Jay Peak and a biotech center in Newport. There is a related project at the Burke Mountain Resort.

Jay Peak investor funds were held in accounts that were managed by Quiros’ son-in-law, Joel Burstein, who was a manager of a Coral Gables branch of Raymond James.

Daccache and his attorneys, Kozyak Tropin & Throckmorton, LLP, allege that Raymond James and Burstein knew the accounts belonged to investors, knew that Stenger and Quiros the general partners in the Jay Peak Limited Partnerships had a fiduciary duty to investors and “together with Quiros and Stenger aided and abetted the breach of fiduciary duty by margining investors assets, helping Quiros steal the investors’ funds for his own use and commingling funds in breach of the partnership agreements.”

Quiros allegedly used funds from investors that were deposited in the Raymond James accounts to purchase Jay Peak Resort in June 2008. The Miami businessman insisted that the sellers of the resort, Mont Saint Saveur International, which had begun an EB-5 program at Jay Peak, transfer immigrant investor funds to accounts at Raymond James, according to his SEC deposition.

MSSI transferred $11 million from Tram Haus investor funds and $7 million from Hotel Jay investor accounts to an account at Raymond James. Burstein and Quiros, according to the lawsuit, then transferred the funds to an account held by Quiros on the day of the closing. Quiros then used the investor money to pay Mont Saint Saveur International $18 million for the resort, according to the SEC complaint. Over the course of the next several months, Quiros used more investor funds to complete payments for the resort that totaled $21.9 million.

Quiros testified under oath that “Raymond James was a great supporter of mine.”

“They’re the ones who developed my banking structure in 2008,” Quiros told SEC investigators. He also told the SEC that the bank set up the margin loans he used to purchase Jay Peak from Mont Saint Saveur International.

Daccache and his attorneys allege that Raymond James knew the monies in the Jay Peak Limited Partnership accounts were investors’ funds and could not be used by Quiros for the purchase of Jay Peak.

Subsequent funds from new investors were then used to backfill accounts for projects, according to the SEC lawsuit.

Quiros used investor funds as collateral for margin loans. At one point he borrowed $105 million from accounts in five of the limited partnerships, according to the SEC.

Dacacche and his attorneys allege that Raymond James and Burstein profited from the scheme. The company earned more than $2 million on margin loans on the Jay Peak accounts.

The lawsuit, written by lead attorney Thomas Ronzetti, also fingers Bill Stenger, who as the general partner for the Jay Peak projects, “reviewed, was responsible for, and had authority over” offering documents for the six projects at Jay Peak. The limited partnerships for each of the developments restricted use of funds.

Daccache alleges that while Stenger was aware of his fiduciary duty to investors, he “facilitated” transfers of investor funds from a People’s Bank account to Raymond James accounts that Quiros had sole authority over. “He willingly allowed Quiros to take control of the funds, abdicating the responsibilities clearly laid out for him in the limited partnership agreements,” the lawsuit alleges.