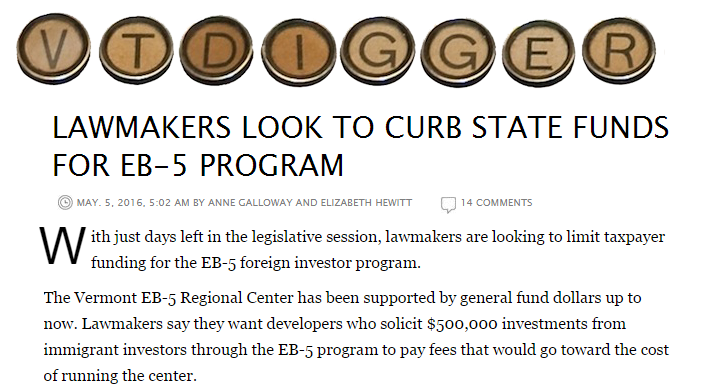 With just days left in the legislative session, lawmakers are looking to limit taxpayer funding for the EB-5 foreign investor program.

The Vermont EB-5 Regional Center has been supported by general fund dollars up to now. Lawmakers say they want developers who solicit $500,000 investments from immigrant investors through the EB-5 program to pay fees that would go toward the cost of running the center.

The language, which is part of the fee bill, H.872, also requires the regional center to make every effort to recoup fees not collected from Bill Stenger and Ariel Quiros, the EB-5 project developers who have been accused of perpetrating a massive fraud in the Northeast Kingdom. The two businessmen allegedly diverted $200 million out of a total of $350 million in immigrant investor funds that were supposed to be used for construction projects. The Securities and Exchange Commission and the Vermont Attorney General have both charged the developers with misuse of funds. As a result of the alleged fraud, the immigration status of several hundred investors is now in jeopardy.

The Vermont Regional EB-5 Center “did not bill” Stenger and Quiros, the developers of a proposed biotech facility and Jay Peak and Q Burke resorts, according to Patricia Moulton, secretary of the Agency of Commerce and Community Development.

Reporters and members of the Senate Finance Committee asked Moulton for the totals on April 19, shortly after news broke about the Securities and Exchange Commission charges against Stenger and Quiros.

On Wednesday, Moulton still did not know how much Stenger and Quiros owe in fees to the state, nor could she say how much had been collected or how much they were supposed to pay per investor or per project. The fee schedule, she says, has changed several times, her regional director, Gene Fullam is out, and she couldn’t provide rough figures until Thursday.

Sen. Michael Sirotkin, a member of Senate Finance, said he had concerns “with the fact that some of the fees were waived” for Jay Peak.

Moulton and Susan Donegan, the commissioner of the Department of Financial Regulation, said Wednesday that the state decided to suspend billing the Northeast Kingdom projects on the advice of counsel.

Donegan said that the state will try to recoup the money that was not charged.

“We may be in a long line at the tail end of folks that haven’t received any money, but we’re certainly going to make sure that our interests our represented,” Donegan said.

The proposed language codifies current practice for regulating and administering the EB-5 program. The agency is charged with the marketing and promotion of projects, while the Department of Financial Regulation is responsible for the approval of projects, review of financials and ongoing oversight.

The Department of Financial Regulation in January 2015 agreed to provide financial oversight of EB-5 projects as part of an agreement with the Agency of Commerce and Community Development. The memorandum of understanding was put in place after news reports showed that state oversight of the Jay Peak projects had been lax.

From 2006 to 2014, the Vermont EB-5 Regional Center did not require Quiros and Stenger to submit quarterly reports. After investor complaints were made public in July 2014, the state stepped up its monitoring requirements.

In reaction to news of the fraud scandal and to what one lawmaker described as Moulton’s “unrepentant” testimony touting the Vermont EB-5 program as the best in the country, members of the Senate Finance Committee at one point considered handing the entire program over to the Department of Financial Regulation.

Instead, however, the Senate and House have agreed that the regional center should continue to promote the projects.

The only remaining sticking point is funding.

Under the statutory changes, DFR would have authority to bill developers for the oversight and regulation of projects.

Lawmakers say they want the center to be self-supporting and to rely solely on investor fees. Currently, however, the agency does not have enough investor fee funds to operate the center and must rely on taxpayer dollars. Moulton wants the center to continue to be supported by the general fund budget.

Moulton describes the budget for the program as “fluid.” The agency employs a regional center director and pays for marketing expenses and international travel to promote the Vermont EB-5 Regional Center.

According to a report from ACCD, the state’s EB-5 fund took in $120,405 in FY 2015. Though the report shows that $63,721 was spent from that — to pay for contractors, advertising, trade shows, out of state travel and other expenses — the report notes that the agency doesn’t expect that revenues will cover all of the operating expenses for a few more years.

The total expenses do not include employees who work for the regional center.

Rep. Janet Ancel, D-Calais, chair of the House Ways and Means Committee and a member of the conference committee, said it is important to clarify the separation of functions within the EB-5 program.

“It would be self-supporting, and it also wouldn’t impose those costs on Vermont taxpayers, which the current system effectively does,” Ancel said.

Ancel said that it is a common goal of lawmakers from both the House and Senate to try to rebuild confidence in Vermont’s EB-5 program, and to set up the structures necessary to restore that trust.

“No one doubts that DFR should be involved as oversight and regulation,” Greshin said.

The question is whether taxpayers should foot the bill for any marketing of the program in Vermont, especially, Greshin said, when Vermont will likely “be in the penalty box” for a while following the allegations.

“I’m just hard-pressed to think that it’s a good idea to be spending money on this program,” Greshin said.

Sen. Kevin Mullin, R-Rutland, said that in the wake of the revelations about the EB-5 projects in the Northeast Kingdom the state needs greater levels of oversight to make the program successful.

Moulton, he said, “kind of scared me today because she was so much of a cheerleader.”

“I think we’ve got a lot of bridges to rebuild on this one if people are going to be confident about investing in Vermont given all the publicity we’ve had,” Mullin said.

Moulton says as a “professional who has been involved in economic development for 35 years and as secretary of ACCD, my job, absolutely, is to be a cheerleader for the regional center.”

She said the EB-5 program has created 3,000 jobs and brought in $563 million in capital investment to the state. “We don’t know of a whole lot of other sources of equity capital that can do that,” Moulton said.