Inside The Golden Bubble: The Fallout And Future After The EB-5 Bombshell 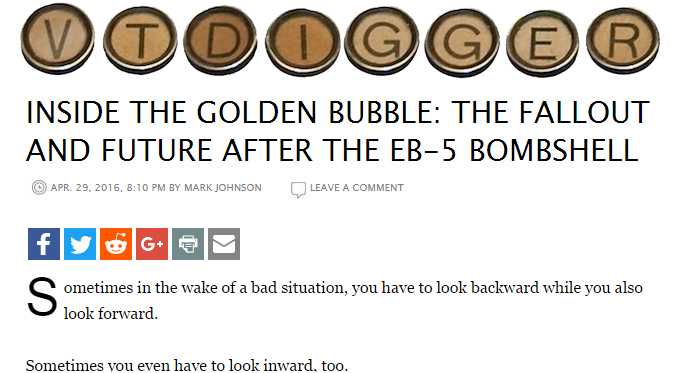 Sometimes in the wake of a bad situation, you have to look backward while you also look forward.

Sometimes you even have to look inward, too.

That was the challenge this week as the House committee that ultimately oversees the EB-5 immigration investment program grappled with the fallout from charges of fraud in the Northeast Kingdom.

Among the questions committee members had: How did it happen, did the state of Vermont do enough, what’s going on now, and, looking to the future, how to help the people in the Kingdom counting on those jobs now unlikely to happen.

“You have to learn from history, you have to do both” to look backward and forward at the same time, said Bill Botzow, the chair of House Commerce and Economic Development. “I do understand that, but neither one should blind the other one. We have to look out of both eyes.”

At times, committee members sounded stunned by the enormity of the allegations: that, according to the Securities and Exchange Commission, developers Ariel Quiros and Bill Stenger ran a Ponzi-like scheme, that tens of millions had been diverted and that one of the prize projects, a biomedical research facility for Newport, was dead, and that another high-profile one, the “hole in the ground” in downtown Newport, might be a long-lasting eyesore.

“If something bad happens, you always have to say I should have done better no matter what. I wish this had never happened. I don’t know what tools there were to get there,” Botzow said.

“The skepticism boat was slow to emerge,” he said.

Among the larger more philosophical issues weaved throughout their discussions inside and outside the committee room: the lure of temptation, the power of greed, the need to be able to trust and be skeptical at the same time, whether Vermont’s eyes and appetite grew too big, and got in over its head, dazzled by the dream for jobs in an area economically challenged, without casting a skeptical eye.

One definite move, he said, would be to codify into statute the regulation of EB-5 projects by the Department of Financial Regulation.

Committee members were clearly working through shock as they tried to figure out where uncompleted projects stood and how to move forward. By the end of the week, the mood in the committee room was decidedly more hopeful after the court-appointed federal receiver, Michael Goldberg, assured them the assets would be assessed, preserved and aggressively sold.

Goldberg, who has helped in cases including the Bernie Madoff scandal, interjected his over-the-phone testimony to the committee with assurances including “I’ve never had a problem selling real estate” that didn’t sound like boasts, just stating the facts.

Committee member Rep. Heidi Scheuermann, a Stowe Republican, like others said she was impressed with Goldberg. As far as the EB-5 scandal, she said the Legislature bore some of the blame.

“I think looking back yeah, I would have liked to have done more. I think we are at fault in some ways of not keeping a closer eye on things,” she said.

Scheuermann took pity on the investors she said were swayed by promotional praises professed by politicians, including Gov. Peter Shumlin and Sen. Patrick Leahy. And she wondered if that endorsement opened the state up to some sort of liability, particularly before promotion and enforcement of the EB-5 program were split in 2014 — putting the DFR in charge of being the watchdog and keeping the Agency of Commerce and Community Development as program’s promoter. ACCD had been both promoter and regulator prior to the split. 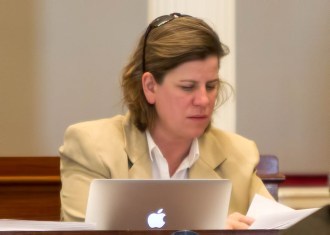 The politician’s praises, Scheuermann, said, “carries with it, I think, overseas a lot of weight so my concern — and I don’t think I’m throwing anything out there that people haven’t thought of, maybe I’ve verbalized it more than others — but my concern is that with that might come some idea on investors’ parts that we’re liable for this because at the same time we were supposed to be regulating it.”

Rep. Michael Marcotte, a Newport Republican on the committee, said the worst part has been the effect on Newport, the “hole in the ground” downtown that’s been left undeveloped and that AnC-Bio, biomedical research facility slated to be built in Newport, will not come to pass.

“What was hard for me to swallow was Newport. All the faith we had put into that vision and the hopes and dreams of business people,” Marcotte said softly.

Marcotte said there was discouragement and disbelief but he was also thankful many of the earlier projects have already been built. And he said the people in the Kingdom will be fine.

“We don’t give up,” he said, “we’re used to high unemployment and struggles and we only have up to go.” In the end, he said, the controversy will be a “minor blip” on the economic development plans of the entire region.

Marcotte said his biggest concern about all the EB-5 projects had been whether the community could keep pace with the developers and produce the number of employees their ambitious plans required. Chair Botzow raised a similar concern, whether Vermont had exposed itself too much approving all the projects and should be more careful of “risk management” in the EB-5 program and throughout state government. 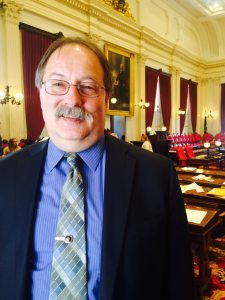 Quiros, Marcotte said, appeared to be greedy, while Stenger, he said “somewhere along the way he got off the right path and got on the wrong path.”

Quiros and Stenger have denied any wrongdoing.

He was encouraged by Goldberg’s plans and the speed that the receiver hoped to move selling assets, including the undone downtown development plan.