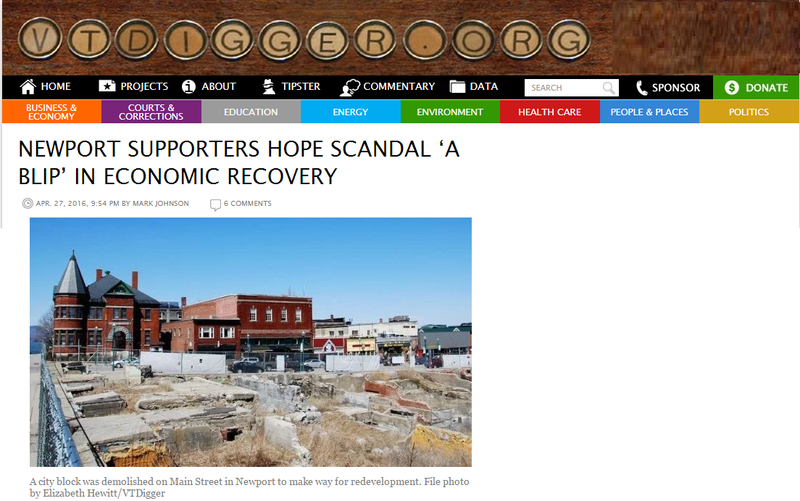 The mayor of Newport and the head of the local development association put their best light on the area’s economic future Wednesday as they sought to cope with the betrayal of scandal and the false promise of hundreds of high-paying jobs for the Northeast Kingdom.

The boosters said their communities would rebound, that there is already interest in some of the properties where development had been planned, and that the jobs they hoped for would come, but just take longer than originally planned.

“Dead in the water — the sky is not falling. No, I don’t feel that,” said David Snedeker, planning director of the Northeastern Vermont Development Association. He emphasized that in particular there were Canadian firms interested in expanding to the Newport area to get a foothold in the United States.

Mayor Paul Monette said the community felt betrayed and it was a difficult time, but that he and others wanted to move forward. Monette said Newport officials met Tuesday with the head of the firm managing the assets of Ariel Quiros, which include the city block in Newport slated for redevelopment that has been completely dug out and fenced in and is commonly referred to as “the hole in the ground.”

Quiros also owns the property in Newport where AnC Bio, a biomedical research firm, was to be located. That project envisioned hundreds of high-paying jobs.

Quiros and his partner, Bill Stenger, have been charged by the Securities and Exchange Commission with running a “Ponzi-like” scheme as they financed a series of multimillion-dollar projects in the Jay and Newport area through an investment program that allows foreigners to obtain permanent residency if they put up $500,000 and create 10 jobs.

Monette said court-appointed receiver Michael Goldberg allayed his biggest concern: whether the properties could soon be marketed to buyers rather than sitting idle, stuck in limbo as the SEC and state fraud cases unfold. 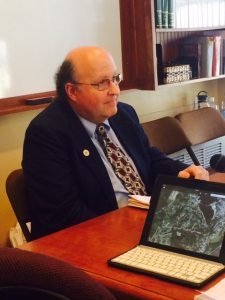 Monette and Snedeker made their comments before the House Commerce and Economic Development Committee. The chairman, Rep. Bill Botzow, noted the investigations are ongoing and important but said, “I want to make sure we keep our eye on the economic prospects for an important region of Vermont.”

The Pownal Democrat said the committee had to “acknowledge the predicament we’re in, but more important than that is to understand what the paths forward look like, what should we expect and to do our duty, our diligence for the people that live in that area, so they will have opportunity no matter what happens.”

Deputy Attorney General Susanne Young said the federal and state cases would go on for years and assured the committee that Goldberg has “broad authority” to “examine the business affairs and determine the best course of action to maximize the assets” to recover the money investors lost.

Young also told the committee that she and Attorney General William Sorrell recently met with Goldberg and he assured them “he would be operating Jay Peak as an ongoing concern and open Q Burke this fall.” Recent media reports had questioned whether the resorts had enough funds to keep going, but Young said Goldberg would be provided money from the assets held by the court, including 30 accounts held by Quiros.

Young told Rep. Heidi Scheuermann, R-Stowe, it was possible investors might sue the state of Vermont over their losses. Scheuermann suggested there was exposure because for the early years in the EB-5 program, the Agency of Commerce and Community Development both promoted and regulated the program. In 2014, the Department of Financial Regulation was asked to take over regulation of the projects.

“That’s a good question,” Young said, adding that Sorrell said at a news conference after the charges were filed that “this litigation could lead down many roads. It could spawn lawsuits (by) investors against the state, against the resorts. It is going to be a very long litigation.”

A letter from Commerce Secretary Patricia Moulton was shared with the committee in which she said she had met with local officials to offer help finding a developer for “the hole in the ground.” She also spoke highly of Goldberg and the management team he has running Jay Peak and Q Burke.

She encouraged lawmakers to codify that DFR would always be in charge of regulating the program. She said the department was doing quarterly inspection visits to all EB-5 projects in Vermont and that no “red flags” had come up at the projects outside those in the Kingdom. The other projects include those at Mount Snow, Okemo Mountain Resort, Trapp Family Brewery and the Stowe airport.

“Much more work remains to be done,” Moulton said in the letter. She was in Jay with Gov. Peter Shumlin during the committee hearing, meeting employees at Jay Peak.

The committee also heard from Transportation Secretary Chris Cole and Aviation Manager Guy Rouelle, who told the committee they had planned to sever their agency’s relationship with Quiros before the news of the scandal broke. Quiros had the contract as the fixed base operator at the state airport in Coventry but dragged his feet making improvements at the site, Cole said. The contract with Quiros expires June 30 and will not be renewed, Cole said.

Cole and Rouelle said there was greater economic opportunity for the region now that the airport runway has been extended 1,000 feet. The two said they were working with a group of Porsche enthusiasts who were scheduled to hold a June event at the airport to find another location because repairs are being made to the fuel tanks and other improvements.

“This has been a difficult time for the city,” Monette said. “I think it was hurt, anger, being deceived, things like that. Because I took the brunt of a lot of those irate calls and people were just downright angry. I was actually really saddened and distressed by it because I had worked with Bill Stenger and he’s lived in the community for 30 years, so I think it hit me kind of personally, especially since I was the huge, I can say mouthpiece for all these projects. As I told people, why wouldn’t I be when I saw how successful Jay Peak was and what had happened up there.”

Monette said zoning bylaws had been developed to streamline the permit process in the downtown area and that Newport had a tax stabilization agreement it could also offer. He noted that Quiros already spent money on the downtown site and spent significant sums removing hazardous material like lead and asbestos.

“Now we just have to move forward from this,” Monette said. “I’ve always painted a very positive outlook, and I just told somebody the other day I just consider this a little blip in our economic recovery.”

“The key is to stay positive and try to move forward from it,” he said.