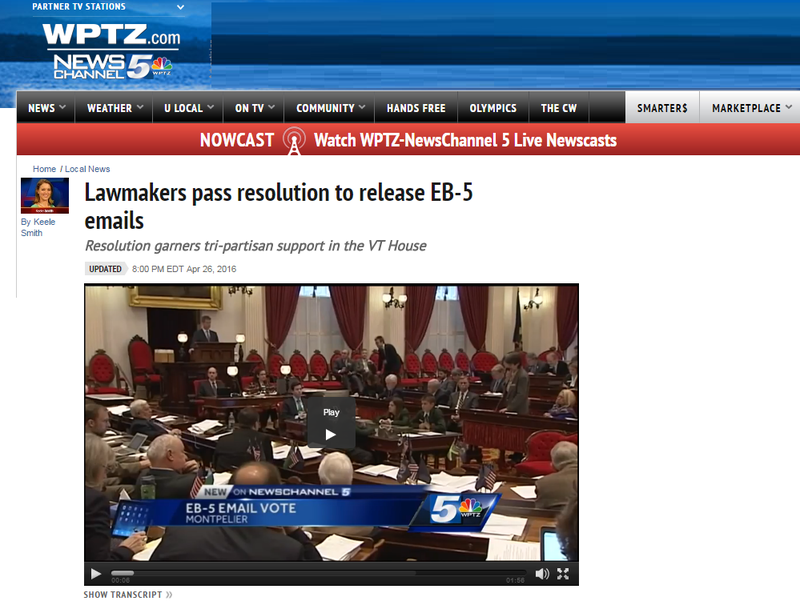 The stunning allegations of investor fraud in Vermont's Northeast Kingdom continues to ripple through the state capital as well.

Lawmakers passed a new non-binding resolution in a voice vote Tuesday to release thousands of emails, some of which might be linked to the Jay Peak EB-5 program.

The new resolution endorsing the release of emails that could be linked to the Jay Peak EB-5 program has support from all three parties in the Vermont House of Representatives.

On Friday, a resolution was proposed by Rep. Chris Pearson, P – Burlington, calling for the release only of emails the Shumlin Administration sought to delete from former staffers accounts.

“A lot of us thought the timing of the request to delete these emails was kind of suspicious,” Rep. Pearson said. “And so we thought, 'oh you should bring them out into the open.' Since Friday, the administration has started to release them and has promised to release the rest as soon as later this week.”

Now, the resolution is broader, calling on the Attorney General to determine which records are subject to public disclosure.

Along with progressive support, Republicans and Democrats are behind it.

“Our concern is we want transparency,” said Rep. Don Turner, R-Milton. “We want everybody to understand what has happened, who's responsible for it and so on. And the initial resolution required the release of these emails which we supported, but then there was some question would it affect a legal case down the road which we were concerned about.”

The resolution is non-binding, but if passed, could put pressure on the attorney general and Shumlin Administration to expedite the process.

“We understand that there was a lot of hopes and dreams in this program and these projects and it was good for Vermont and good for the Northeast Kingdom. They might not be going forward but we understand and will continue to do whatever we can to make sure they are not forgotten,” Turner said.

Vermont Digger and Vermont Public Radio are reporting that the Shumlin Administration hopes to release thousands of emails by the end of the week.