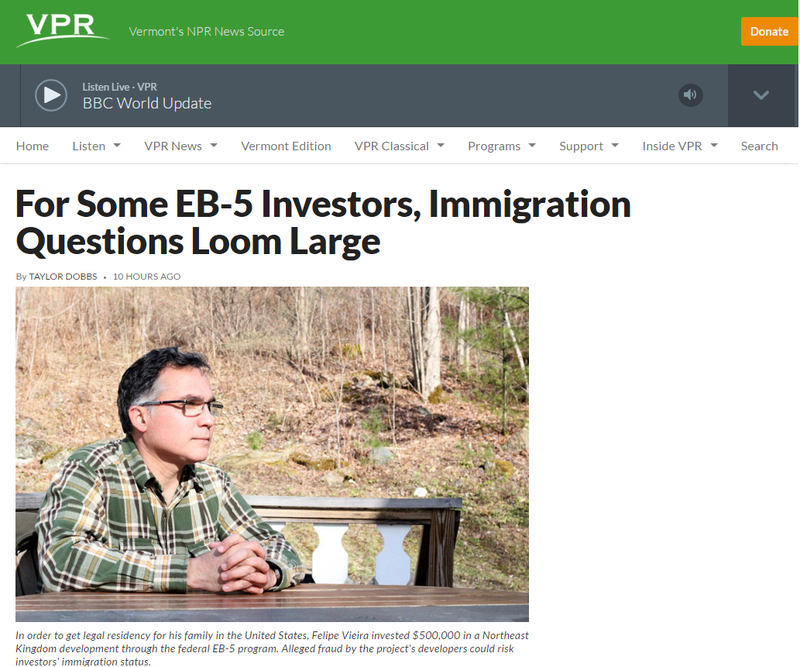 Allegations of fraud at multiple developments in the Northeast Kingdom have raised major questions about the future of those projects and the jobs they were supposed to create, and Northeast Kingdom residents weren't the only ones counting on those jobs. For foreign investors who used the federal EB-5 program to fund the projects and pay their way into the United States, the alleged fraud could jeopardize their immigration status.

One of them is Felipe Vieira. He might not be the person you imagine when you think about people who pay a half a million dollars to come live in the U.S.

He lives in Stowe in a 1960s-era split-level home with his wife and 16-year-old daughter, and he works in IT.

“I don't think I fit [into] that description of a deep-pocketed investor,” he says. “Basically, we sold a small farm I had in Brazil and an apartment I used to have in Rio to move here.”

Those sales went toward the $500,000 investment Vieira made in the Stateside Hotel Suites at Jay Peak. The investment was part of the EB-5 program, and allowed Vieira to move with his family to Stowe.

But according to federal authorities, the investment money didn't go where Vieira thought it would. The Securities and Exchange Commission says Jay Peak owner Ariel Quiros and CEO Bill Stenger of misappropriated $200 million out of the more than $350 million raised from foreign investors. The SEC says Quiros used $50 million for his own purposes, including to buy Jay Peak and to purchase a condominium in new York City.

The project Vieira invested in is part of what developers represented as "Phase Six" of their plans. “And that's a problem,” Vieira says, “because phases one through five are basically done and the investors have their green cards.”

For Vieira and other investors in the projects that seem to be a total loss, the financial investment isn’t the only thing in jeopardy. The alleged fraud may cause them to lose their immigration status.

The EB-5 program can get investors legal residency in the U.S. for $500,000, but Vieira says they also have to meet certain conditions:

“You have to prove the legal source of the funds — so you can show how you get that money — and the other thing is you have to invest in a target area like Northeast Kingdom that needs job creation, and then you must create 10 jobs for each investor.”

Vieira says he proved the legal source of his funds and, of course, invested in a target area. Now he's out half a million dollars and some of the hotel suites he was investing in haven't even been started.

"Basically, we sold a small farm I had in Brazil and an apartment I used to have in Rio to move here." - Felipe Vieira, EB-5 Investor

What does that mean for those 10 jobs Vieira's money was supposed to create? And what about the other jobs from the other investors' money?

Vieira says that since the allegations became public, he's been working with 69 other investors to get some answers to those questions.

“The concern we investors have is, 'OK, so if our project did not finish yet, how immigration will account for those jobs- job creation?'” he says. “And we did nothing wrong, you know? We invested, the project is supposed to create the right number of jobs if everything [is] sound.”

Vieira says he requested a meeting with Gov. Peter Shumlin last week, but was declined.

And he says federal officials have also been short on answers so far.

"We need information at this point. Everybody's very scared."

“So we don't have feedback from immigration or from the courts or Securities [and] Exchange Commission,” he says.

He says he did get a meeting with the state's Agency of Commerce and Community Development, but so far Vieira's $500,000 investment is mostly yielding unanswered questions.

And he says there were hints of issues when he would talk to Stenger, the Jay Peak CEO who pitched many investors on the projects.

“I cannot say I [didn't] see anything, because I keep asking Bill Stenger for information, for data, supposed to have information about how the project is going and he failed to produce a project schedule, a disbursement schedule, anything related to the project.”

But Vieira doesn't seem too interested in assigning blame — he's more focused on being able to stay in the U.S.

“We need information at this point. Everybody's very scared.”