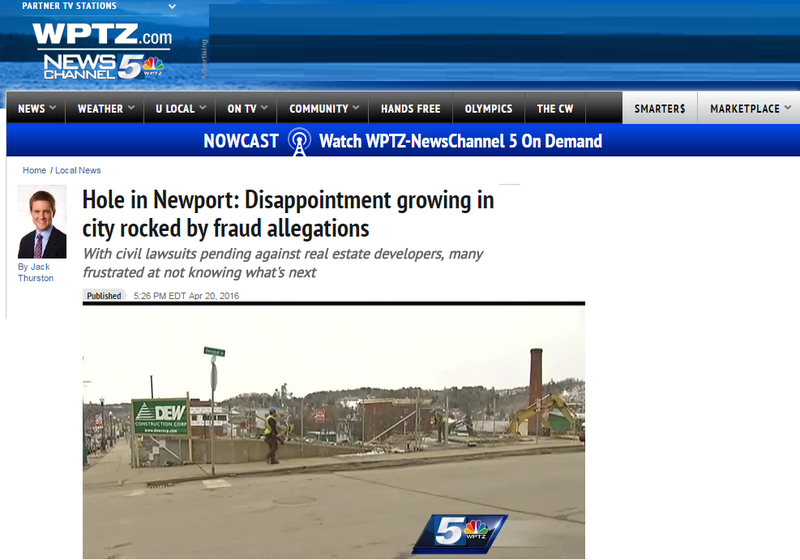 A week after allegations of massive fraud in a series of real estate deals in Vermont's Northeast Kingdom, disappointment and frustration continue growing among many people in affected communities

"It kind of feels like the rug's been pulled out, under all of our feet," said Ned Andrews, who works in Newport. "And it's really sad."

The gaping hole in the center of downtown Newport looks and feels like betrayal to many in the small city on Lake Memphremagog. The community has long been hungry for jobs, and many saw a "renaissance block" redevelopment as a sign of brighter days ahead.

Businessmen Bill Stenger and Ariel Quiros promised to redevelop the city block as just one part of a more than half-billion dollar effort to revitalize the Kingdom.

Instead, state and federal civil lawsuits claim the developers misused a few hundred million in foreign investment dollars. The alleged method was a Ponzi-like scheme dating back to 2008, involving moving money between more than 100 financial accounts to cover old debts and new acquisitions not properly disclosed.

Quiros, who was described in the civil suits as the mastermind, is also accused of using investors' money to buy himself a luxury condo in Manhattan, pay his personal taxes, and to purchase the Jay Peak resort.

"And then left us with a big hole in our town," observed Shawn Gardner of Newport. "That's pretty crappy."

His lawyers wrote in a new court filing, "Literally, Quiros cannot purchase food or a cup of coffee, yet [sic] alone defend against the SEC's allegations."

The legal team argued the government's claims are "demonstrably false," suggesting Quiros did nothing wrong in profiting off projects like the new hotel and waterpark at Jay, which were completed and are operational.

"He's got chutzpah," laughed Anne McKay of North Troy, in reference to Quiros's request to access money the government claims was ill-gotten.

McKay said she hopes something can still be done with the Newport property.

Already, in the small city on Lake Memphremagog, wishes are starting to circulate, from converting the cavern into a park, or to house a new building, if different developers step up.

"I think Newport is a survivor community," McKay said. "We've been through tough times before and I think we'll be OK."

If Congress will not reform EB-5, Leahy said he will not support continuing the federal program, which puts foreign citizens on track for permanent, legal U.S. residency in exchange for investments that create jobs in rural America.

Last week, Attorney General Bill Sorrell, D-Vermont, told reporters any potential punishments for Quiros and Stenger would be financial or regulator, because the charges against them were civil.

However, those potential punishments could change if the charges are upgraded to criminal ones, Sorrell said.