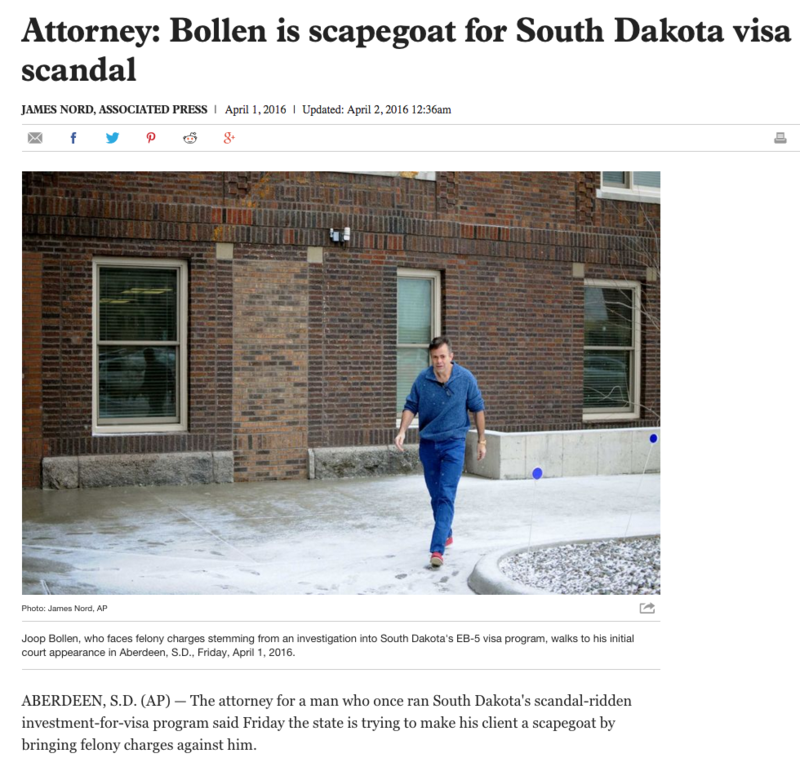 The attorney for a man who once ran South Dakota's scandal-ridden investment-for-visa program said Friday the state is trying to make his client a scapegoat by bringing felony charges against him.

Joop Bollen made his first court appearance on charges of diverting more than $1.2 million — through different transfers in 2012 — from an account meant to protect the state from losses. Authorities link the money transfers to Bollen's purchase of an Egyptian artifact, among other uses such as buying bonds.

A court affidavit said most of the money was repaid to the account, but a state investigator said in the document that a nearly $167,000 transfer does not appear to have been refunded. Bollen does not face theft charges.

"If somebody robs a bank and exercises control over money of that bank, and they then leave, and they either find out that law enforcement now knows who they are, or they just decided to do the right thing and they pay that back, that still is an issue under the law," Attorney General Marty Jackley said after the proceeding.

The complicated EB-5 scandal has included state and federal investigations and an inquiry into the suicide of a former government official accused of contributing to its mismanagement.

The new charges deal with SDRC Inc., which previously handled South Dakota's participation in the EB-5 visa program. Bollen headed the EB-5 program for the state when he was in charge of the South Dakota International Business Institute at Northern State University. The program was privatized in 2009 and turned over to SDRC, the company Bollen had founded, until the state took over management in 2013.

Bollen, 52, was charged Thursday, and Jackley has said additional charges may come as authorities continue investigating.

Bollen spoke very little at the brief court appearance in Aberdeen. His attorney, Reed Rasmussen, pushed back against the charges afterward.

"The state has decided to transform what should be at most a breach of contract case into a criminal proceeding in an apparent attempt to make Mr. Bollen a scapegoat for problems encountered with the EB-5 program," Rasmussen said Friday. "There is absolutely no missing money. Mr. Bollen denies all the allegations and looks forward to clearing his name in court."

The state directed SDRC to create the fund at the center of the charges as part of its 2009 contract to manage the program.

Most of the more than $1.2 million total in transfers — spread across five occasions in 2012 — from the fund went directly into SDRC's main bank account, according to the court affidavit.

Then, authorities noted transfers out of SDRC's account. They link the funds to Bollen's purchase for nearly $97,000 in April 2012 of an Egyptian artifact from a dealer. A spokeswoman for the merchant wasn't able to provide details about the artifact to The Associated Press based on the information provided.

In June 2012, authorities say $310,000 was transferred from the fund to SDRC's account. The next day, the same amount was moved from SDRC's account to the Harer Family Trust. Benson Harer, a collector of Egyptian artifacts who said he had spoken to an investigator, declined to comment.

Jackley declined to provide more details about "where those assets are at this time."

South Dakota was one of the states that championed the immigration program for investors, which was led by Bollen and former Governor's Office of Economic Development secretary Richard Benda. Benda committed suicide in 2013 as state officials prepared felony theft charges against him.

The issue came up during former Gov. Mike rounds successful 2014 campaign for the U.S. Senate, with critics faulting his management of the program.

Rounds served as South Dakota's Republican governor from 2003-2011. The EB-5 program was one of several federal tools meant to bring economic development to rural areas, and South Dakota was among nearly all states in participating, Rounds said in a statement Friday.

"Oversight and accountability should be expected at the federal level," Rounds said. "I've said for two years that I would work to see improvements in this and other federal programs where additional federal oversight is needed."