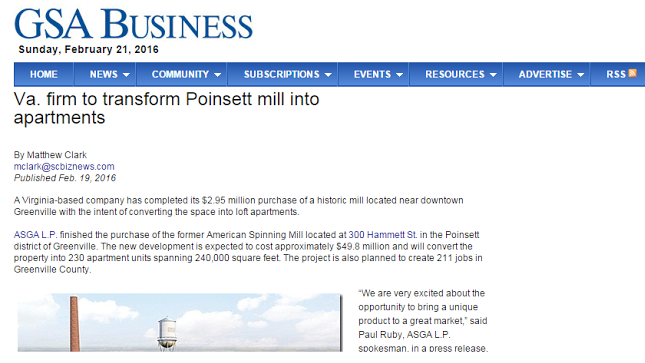 A Virginia-based company has completed its $2.95 million purchase of a historic mill located near downtown Greenville with the intent of converting the space into loft apartments.

ASGA L.P. finished the purchase of the former American Spinning Mill located at 300 Hammett St. in the Poinsett district of Greenville. The new development is expected to cost approximately $49.8 million and will convert the property into 230 apartment units spanning 240,000 square feet. The project is also planned to create 211 jobs in Greenville County.

“We are very excited about the opportunity to bring a unique product to a great market,” said Paul Ruby, ASGA L.P. spokesman, in a press release. ‘It’s important for us to contribute to Greenville’s ongoing success by maintaining the historic significance and integrity on the site and the community.”

The company said it has already raised $7.5 million through the EB-5 Immigrant Investor Program administrated by the Department of Homeland Security. The program allows for foreign entrepreneurs, their spouses and unmarried children under 21 years of age to obtain permanent residence in the United States if they make the “necessary” investment in a commercial enterprise and if they plan to add at least 10 permanent full-time jobs for qualified U.S. workers, according to the U.S Citizenship and Immigration Services, a division of the Department of Homeland Security.

ASGA L.P. was formed by AII Funds, an EB-5 development group, and is one of 31 projects AII Funds lists on its website. AII Funds lists projects in Tennessee, Georgia, Mississippi, Alabama, Arkansas, Florida, Missouri, Kansas, Colorado, New York, Massachusetts, Ohio, Illinois, Minnesota and Wisconsin. The estimated costs of those projects range in cost from $18 million to $154 million and in scope from senior living to hotels and resorts.

Nick Hollstegge, with CBRE, facilitated the sale for the property seller, White Horse Properties of Greenville. He said there were “several” parties that looked at the mill property and the property was on the market for approximately six months. According to Greenville County records, consideration for the transaction was $2.95 million.

“There were quite a few that looked and, for the most part, we had a lot of out-of-market folks looking with a similar vision for the property,” Hollstegge said. “We kind of targeted folks that had some experience with these kinds of properties.”

According to the Greenville Textile Heritage Society, the American Spinning Mill began operations in September 1895 and continued operations until June 27, 1990 when it was closed.