Palm House developers facing another lawsuit over use of funds 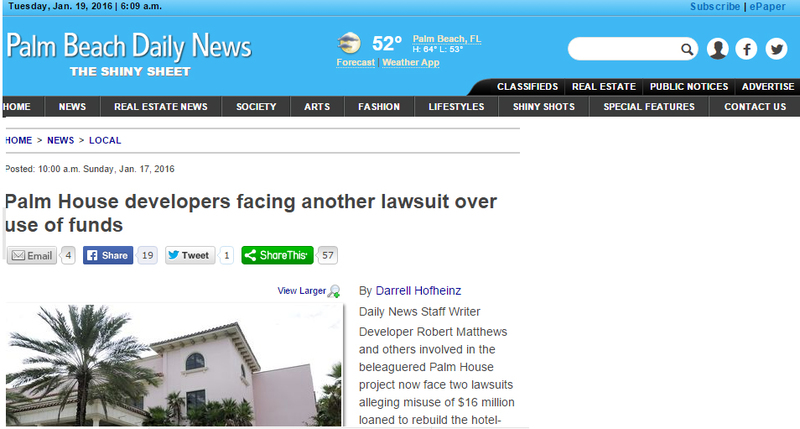 Minority owner Ryan Black filed the second suit late last month. It repeats many of the claims made in a suit filed the same day by a company that loaned the project millions of dollars.

Black’s suit alleges that the money — loaned for the project’s construction through a federal program — was mishandled. The program, known as the EB-5 Immigrant Investor Program, channels money from foreign investors into construction projects on U.S. soil.

The disputed funds were used to pay Matthews’ personal expenses, including his personal real estate taxes, as well as to improperly buy a $5.75 million 151-foot yacht named Alibi, according to the suit.

Matthews last week denied the allegations in both lawsuits. Matthews, who once owned the hotel, said he was preparing his own legal action and claimed every expenditure was appropriate. That includes buying the yacht, which he said was to have been used by members of Club Alibi, a private club once envisioned for the Palm House development at 160 Royal Palm Way. The yacht, which has been sold, last month was the subject of a separate legal action in federal district court.

Attorney C. Brooks Ricca Jr., who filed the suit for Black, said Thursday that its allegations are based on Black’s “knowledge and belief” but questions remain and he wants to question the defendants under oath.

“These disputes – they’re complicated – need to be addressed in court,” Ricca said.

Just steps from the ocean, the Palm House at 160 Royal Palm Way has been through renovation under different owners since 2007. Since then, the project has racked up nearly $2 million in town fines, mostly related to construction delays.

Last summer, the project was placed under the control of a court-appointed receiver, Cary Glickstein, who also is the mayor of Delray Beach. On Wednesday, the Town Council approved a new site plan Glickstein submitted to bring the project into compliance with a plan authorized by the town in 2012. The revised plan reverses earlier changes — some already built — that were made without the council’s approval.

Black filed his lawsuit Dec. 30 as a member of, and on behalf of, Palm House LLC against Matthews; his wife, Mia; and eight other defendants.

Much of the language and many of the charges in Black’s lawsuit are identical to that in the lender’s suit filed the same day. The lender, Palm House Hotel LLLP, holds a $39.5 million second mortgage on the property related to its loan, according to court filings.

The Palm House’s primary mortgage lender is a company controlled by Wellington developer Glenn Straub, a former owner of the project. Straub’s company initiated foreclosure proceedings in 2014, claiming its $27.5 million was in default.

Palm House Hotel LLLP is linked to USREDA, a Royal Palm Beach-based company run by businessman Joseph Walsh to help foreign investors take advantage of EB-5 money. The program allows investors to be fast-tracked for a “green card” if they — and the construction projects they help fund — meet all the conditions of the program.

Plaintiff Black was a key player in an ownership dispute that erupted publicly in October 2014, after he had the doors of the Palm House padlocked. Black told police at the time that the building was being “seized.” That action pitted him against members of the Matthews family and others involved in the project, including the hotel’s contractor, New Haven Contracting South, a company headed by Nicholas Laudano. Construction never resumed.

Robert Matthews confirmed last week that his brother, who lives in Connecticut, appointed him as his agent for the Palm House after Gerry Mathews’ group took ownership in August 2013. Gerry Matthews is not named in either lawsuit.

Among the charges in his suit, Black claims the money loaned for construction projects was misappropriated at the direction of Robert Matthews, who was given unauthorized access to a trust account. Black’s lawsuit says Matthews initiated “multiple” transfers of money from the trust fund into a Regions Bank checking account he and his wife set up “in the name of 160 Royal Palm.”

That money went “to persons or entities completely unrelated to the project,” the lawsuit says.

Matthews last week denied any wrongdoing regarding its use.

“There was no personal bank account. 160 (Royal Palm LLC) had a bank account — only one — that was used for hotel expenses. All of the checks that went out of there were legitimate checks for (hotel) expenses,” Matthews said.

The first disputed trust-fund withdrawal listed in Black’s suit allegedly occurred in late December 2013, with a transfer of about $266,100 to the Palm Beach County Tax Collector’s office to pay personal real estate taxes owed by Robert Matthews and his wife. From January 2014 to August 2014, more than $16 million was transferred into the Regions Bank 160 Royal Palm account, the suit says.

Of that amount, “slightly in excess of $12 million was ‘paid’” to contractor Laudano and his construction firm, according to the lawsuit. But the suit claims “a significant portion” of the $12 million “did not go into consideration of the hotel or into the project because the books of (Laudano’s company) reveal that the funds expended on the project” totaled far less than $12 million.

Also at issue in both lawsuits is the purchase of the yacht Alibi. Among the unauthorized expenditures was a $1 million deposit toward the yacht’s purchase, according to the suit.

Robert Matthews bought the yacht using a corporation he controlled, the suit says, and then immediately transferred ownership to a limited liability company controlled by his wife.

The yacht recently was sold; $3 million in net proceeds last month were placed in a court-controlled, escrow-like account after a federal district court hearing initiated by Black. Distribution of the money awaits a judge’s order.