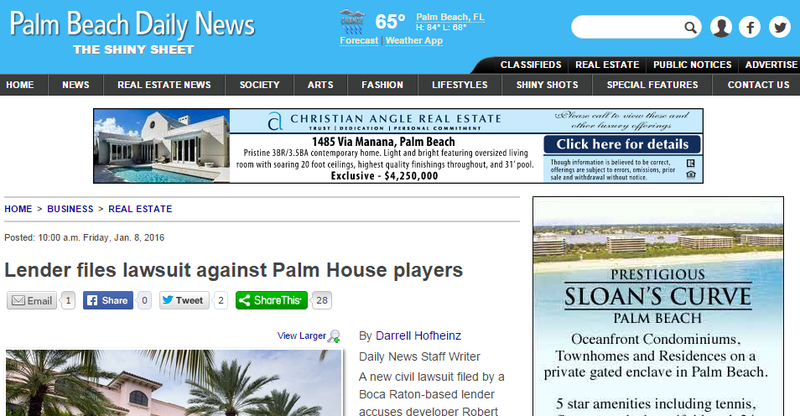 The lender, Palm House Hotel LLLP, filed the lawsuit Dec. 30 against 14 defendants, with Matthews heading the list. They include real estate lawyer Leslie R. Evans and his Palm Beach firm. The lawsuit seeks unspecified amount in excess of $15,000.

Among the allegations in its eight counts, the suit claims Matthews would authorize Evans to execute “frequent and substantial transfers” of loaned money “for his own use and benefit” from a trust account into a checking account controlled by Matthews and his wife, Mia, who also was named as a defendant. The trust account’s funds, however, were earmarked for “the sole purpose of funding the remodeling and renovation of the hotel,” the lawsuit says.

Matthews on Thursday denied the suit’s allegations against him and the hotel’s ownership company.
“160 Royal Palm LLC is looking forward to its day in court, and a countersuit will be filed promptly that will lay out the real facts,” said a statement released by Evans on behalf of Matthews and the limited liability company that owns the hotel.

Speaking on his own behalf and that of his firm, Evans said the lawsuit had no merit.

“This is a frivolous lawsuit and the plaintiff took a shotgun approach of pretty much naming everyone ever associated with the project in any manner whatsoever. It is an act of desperation, and we look forward to being fully vindicated when the truth comes out.”

The lawsuit concerns a loan — backed by a second mortgage on the property — issued to the hotel’s ownership in January 2014 by a limited liability limited partnership co-managed by businessman Joseph Walsh that channels funds from foreign investors into U.S. construction projects.

Walsh heads a Boca-based financial consultancy firm that channels funds from foreign investors into U.S. construction projects under the federal EB-5 Immigrant Investor Program. Such investors can be fast-tracked for a “green card” if they meet all the conditions of the program. According to the loan agreement, a maximum of $39.5 million of EB-5 funds was available for the Palm House.

The lawsuit says Walsh’s company advanced “over $36 million,” which was put into the trust account.
Although Bob Matthews once controlled the company that owned the Palm House, he and his wife have no ownership interest in the project today, the suit says. Instead, the majority ownership is controlled by his brother, Gerry Matthews, who wasn’t named as a defendant in the suit.

The suit was filed by attorneys for Weiss, Handler & Cornwell, who couldn’t be reached for comment. The suit seeks resolution via a jury trial.

The Palm House project has been under construction under different owners for more than eight years at 160 Royal Palm Way. It has racked up about $1 million in town fines, much of that related to construction delays. In October 2014, the doors to the Palm House were padlocked amid an internal ownership dispute involving several of the parties named in last week’s lawsuit. The construction site has been dormant since. A foreclosure suit has also been filed by the project’s primary lender.

On Wednesday, the Town Council is expected to review a revised site plan submitted by Cary Glickstein, the project’s court-appointed receiver. Glickstein, the Delray Beach mayor, said previously that the revised plan would bring the project into compliance with a plan originally approved by the town.