The Los Angeles nightlife magnate who revamped Las Vegas' Sahara hotel and casino won a Nevada gambling license Thursday after explaining his drug use and curious business dealings, but not without limits and a promise that he'll remain under heavy scrutiny.

Sam Nazarian's license expires in a year, bars him from being involved in casino operations, and requires him to set up a fund with $50,000 at all times to cover the state's ongoing investigations of him. The 39-year-old must also submit to random drug tests at least every three months, among other conditions, including having no associations with any people of disrepute.

"Not only will I not embarrass, but I'll make you proud," Nazarian told members of the Nevada Gaming Commission. He said he had done some soul-searching in the weeks after his first interrogation by regulators earlier this month and realized "I need to take some time for myself after 39 years."

He told commissioners he has sought the help of a doctor to determine if he has a substance abuse problem.

Thursday's hearing came two days after an announcement that, in light of the license investigation, Nazarian would step aside from any involvement in the day-to-day operations of the SLS Las Vegas, of which he owns 10 percent. He ceded oversight to the hotel-casino's majority owner, Stockbridge Capital.

The entrepreneur had his whole life on display at public hearings — the good, the bad and the private — as regulators weighed whether to grant him a license, a requirement to participate in Nevada's top industry.

Nazarian's admitted cocaine use — plus his evasiveness when talking with investigators about it — and his vulnerability to extortion attempts for several years troubled gaming commissioners charged with maintaining integrity in an industry once tainted by mobsters and corruption.

At the heart of the intense questioning of anyone looking to lead casino operations in Nevada is the consideration of an individual's character, honesty and integrity to avoid negative publicity for the state's primary source of income.

Before joining three other commissioners to vote unanimously in favor of Nazarian's limited license, Randolph Townsend warned that any missteps by Nazarian would be a "pox on all of us."

"If this goes forward, don't let us down," he said.

Three of the commissioners said they were prepared to deny Nazarian a license based on his answers at a marathon Gaming Control Board hearing earlier this month and what the state's investigation turned up, but they noted that he appeared to be contrite, humble and sincere on Thursday.

"I hope you've learned that this isn't L.A. or Miami," Commissioner Joseph Brown said. "Gaming is a totally different ballgame."

Nazarian was apologetic throughout the two-hour hearing, telling commissioners he was sorry for not being candid when asked for details of his drug use, saying it might have been in the ballpark of two years ago. That was before he tested positive for cocaine use in a hair-sample drug test.

On Thursday, he gave the exact date he used cocaine in 2013. He has previously said his drug use was a mistake.

Also a focus of the investigation were numerous payments totaling nearly $3 million to a former business associate and felon, Derrick Armstrong. Nazarian's lawyers likened the payments to extortion. Nazarian said he made the payments out of fear.

There also was a $90,000 payment to another felon, record producer Marion "Suge" Knight, who was upset about apparently being owed money in a deal involving Armstrong.

Nazarian said he has taken different steps recently, including employing lawyers and working with local law enforcement agencies, to end such dealings.

Armstrong has not been charged with extorting Nazarian.

Commissioners had trouble reconciling why Nazarian continued making payments to Armstrong if his claims for the funds were without merit.

Armstrong said in a phone interview that he planned to attend Thursday's hearing to clear his name, calling Nazarian's claims of extortion untrue. 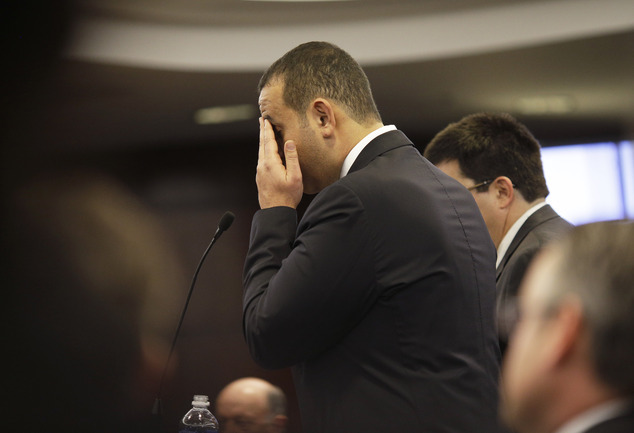 Sam Nazarian, a 10 percent owner of the SLS Las Vegas hotel and casino, rubs his face while speaking before the Nevada Gaming Commission Thursday, Dec. 18, 2014, in Las Vegas. The Gaming Control Board recommended 2-1 that the commission grant Nazarian a license, but with limits. It would only be good for a year, and the board recommended Nazarian have no oversight of gambling at the SLS Las Vegas, avoid associating with individuals of disrepute and submit to random drug tests, among other limits. 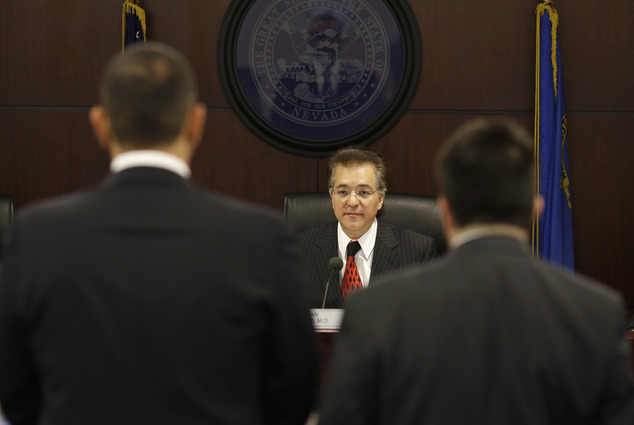 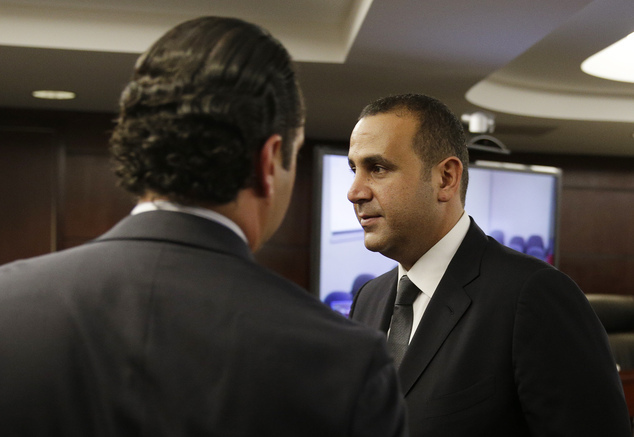 Sam Nazarian leaves a meeting of the Nevada Gaming Commission Thursday, Dec. 18, 2014, in Las Vegas. Nazarian, a 10 percent owner of the SLS Las Vegas hotel and casino, appeared before the commission seeking a gaming license. 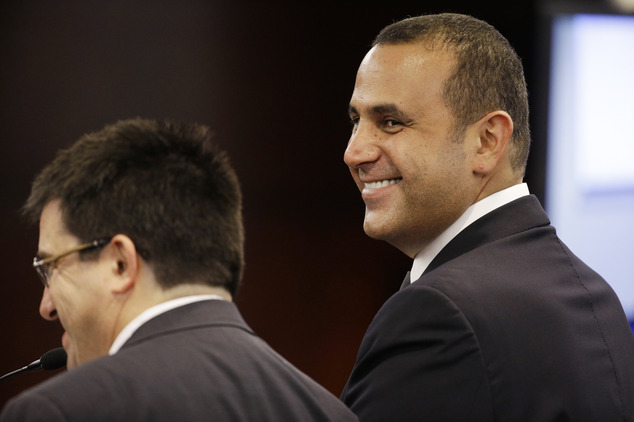 Sam Nazarian, right, smiles while speaking with his attorney Anthony Cabot, left, before the Nevada Gaming Commission Thursday, Dec. 18, 2014, in Las Vegas. Nazarian, a 10 percent owner of the SLS Las Vegas hotel and casino, appeared before the commission seeking a gaming license. 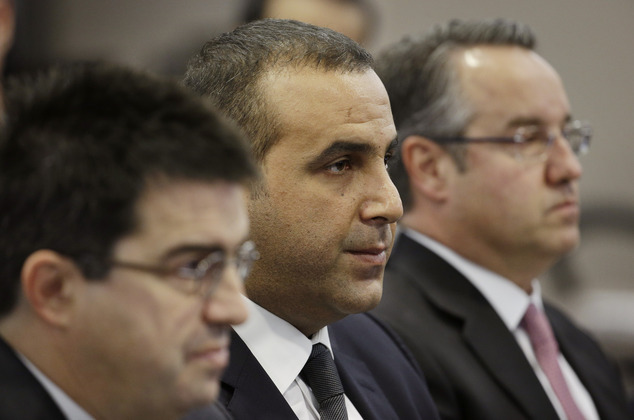 Sam Nazarian, center, attends a meeting of the Nevada Gaming Commission Thursday, Dec. 18, 2014, in Las Vegas. Nazarian, a 10 percent owner of the SLS Las Vegas hotel and casino, appears before the commission seeking a gaming license. 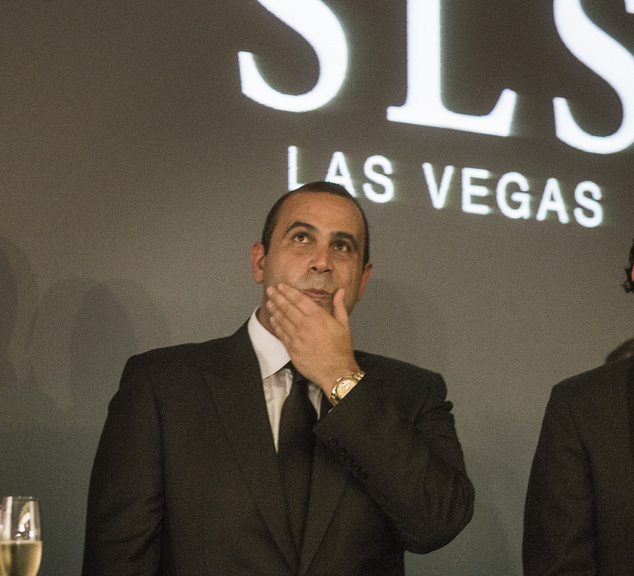 This Aug. 22, 2014 photo shows, Sam Nazarian, CEO of SBE Entertainment, during the ceremonial ringing of the bell at SLS Las Vegas. The Los Angeles nightlife entrepreneur who recently revamped the Sahara Hotel and Casino on the Las Vegas Strip into a hipper, sleeker destination is facing another interrogation into past misdeeds as he seeks a Nevada gambling license. Nazarian is scheduled to appear before Nevada¿s Gaming Commission on Thursday, Dec. 18, 2014.