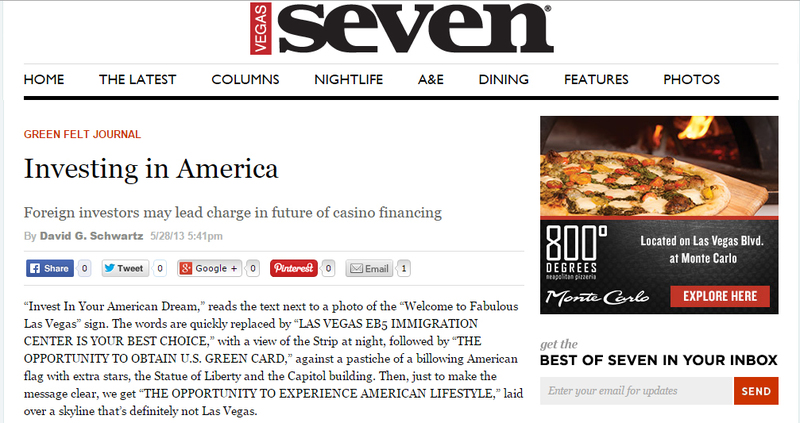 SLS Las Vegas President Rob Oseland will have some unique operational advantages to work with at the new casino resort, slated to open in 2014.

SLS Las Vegas is about 13 months from opening where the Sahara used to be. If you haven’t been excited about it, I understand. I was in the same boat. A new casino landing on the Strip usually inspires kid-on-Christmas-Eve anticipation, but something was off with this one. That’s one of the reasons I wanted to talk to Rob Oseland, president of SLS Las Vegas.

His involvement with the project—most of us consider it a renovation and rebranding of the Sahara, but it’s bigger than that—is exciting by itself, considering his pedigree. He held high-ranking positions at Station Casinos and Bellagio, then spent 10 years building teams and resorts for Wynn, including Encore. Oseland took the SLS post with SBE—the fast-growing hospitality, lifestyle and real estate development company headed by Sam Nazarian—partly because it offered a chance to continue building new stuff on the Strip.

And although it’s going up over the bones of the once-essential Sahara, make no mistake: SLS is a new hotel and casino. It deserves at least my normal level of excitement. Maybe more.

Why? There’s an operational uniqueness that might be a first for the Strip. SLS already exists; it has for a while now. Though a great casino-resort can and should be greater than the sum of its parts, those parts mean everything. And SBE has been developing, promoting and polishing these parts for years.

Everything at SLS, from hotel rooms to casino lounges, will be designed by Philippe Starck, who’s been working exclusively with SBE since 2005. The company’s flagship venues, including restaurants the Bazaar by José Andrés and Katsuya, along with Nazarian’s first nightclub, Shelter, will anchor the resort. Nazarian even has a 50 percent stake in Umami Burger, the trendy LA eatery that will also make its Vegas debut at the north tip of the Strip next year. The only big draw at SLS that’s not part of SBE is upscale fashion retailer Fred Segal.

“There aren’t a lot of nightlife, hospitality and restaurant companies with such a broad, popular array of destinations,” Oseland says. “The fact that we’ve got brands that are currently popular, plus teams of staff that are well-experienced, that takes a considerable amount of risk off our operations to achieve success, not to mention the advantage in profitability.”

The only Strip operation comparable to this model is Oseland’s old stomping grounds at Wynn, which famously developed its own restaurant and nightclub brands beginning in 2005. Another advantage, Oseland notes, is that existing SBE clubs and restaurants in LA, New York City and Miami suddenly become “marketing offices” for what’s new in Vegas.

“We have a great database built up, and the employees in other markets are excited and talking about Vegas, and our customers are already connecting.”

Then there’s Hyde Bellagio, the lounge and nightclub that has served as SBE’s practice run on the Strip. Doing business there allowed SBE to adapt to the Vegas audience and learn about Strip culture while fine-tuning plans for SLS … and while making a bunch of money. The successful partnership with MGM Resorts, which owns Bellagio, has spawned another collaboration: SBE will open the Double Barrel Roadhouse restaurant and bar as part of MGM’s pedestrian-friendly park project at its Monte Carlo and New York-New York properties.

That means SBE will be both partnering and competing with MGM, marketing its very own Vegas casino to customers from inside somebody else’s resort.

“There are hundreds of thousands of people walking along the Strip that probably would never walk down to SLS. It’s too far,” Oseland acknowledges. “And if they have a good experience [at Double Barrel], maybe we can upsell them with what’s going on at the north end of the Strip and capture visits we wouldn’t have had.”

Of course, SLS has some serious challenges ahead, including its location separate from the rest of the Strip. But SBE might have offset some of those by building in special advantages. Things are going to get very interesting in about 13 months, and yes, I’m pretty excited about it.