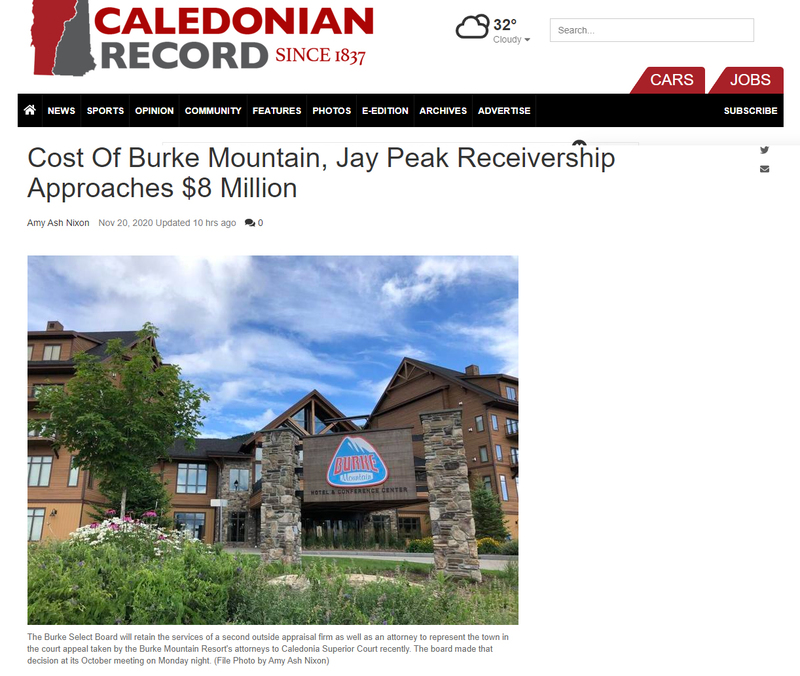 The Burke Select Board will retain the services of a second outside appraisal firm as well as an attorney to represent the town in the court appeal taken by the Burke Mountain Resort's attorneys to Caledonia Superior Court recently. The board made that decision at its October meeting on Monday night.

The federal receiver appointed to oversee operations and assets at Burke Mountain and Jay Peak ski resorts asked for $728,798 for the period from March 1 to August 31 of this year.

Michael Goldberg was appointed receiver in the Spring of 2016 when the properties were seized by the Securities and Exchange Commission. This was the ninth interim omnibus application to the United States District Court of Southern Florida, seeking legal and accounting fees. The filing was made in the federal court last month before Judge Darrin P. Gayles.

The recent filing includes details on the eight earlier applications for professional fees associated with overseeing the receivership. During this time, a total of $7,892,131.64 has been spent.

Federal authorities appointed the receivership when the former owner of the resorts, Ariel Quiros, was accused of perpetrating the most massive fraud in Vermont state history in what was dubbed a ‘Ponzi-like’ scheme. He and several associates faced federal and state civil charges and later criminal charges. The civil complaints have run their course, and Quiros, in a settlement in which he neither admitted nor denied guilt, turned over both ski resorts in the Northeast Kingdom and other assets worth more than $80 million.

Ultimately, the resorts will be sold for the benefit of investors.

In the recent application, approved by the court in recent weeks, the 9th omnibus report stressed that the team of professionals and firms working in concert with Goldberg continue to bill for their services at discounted hourly rates.

The report shows that the ending balance for the receivership on Aug. 31, representing the net assets on hand in the civil receivership fund at that time, was $19,270,525.94.

According to the recent filing, “These amounts do not include the funds used to maintain and operate the Jay Peak Resort, the Burke Mountain Hotel and related properties.

He noted that Jay Peak is “actively marketed,” and that “The Receiver continues to operate the Burke Mountain Hotel to generate more jobs as required under the EB-5 program for the investors’ benefit.”

Earlier this month, the U.S. District Court approved the sale of 22 acres owned by Burke 2000 on Victory Road, to be sold from a 71-acre tract, a recent court filing shows.

“The Receiver has used his business judgment to develop plans to enhance the Receivership Entities operations before their sale to boost the value of the receivership assets and provide proof of job creation for the benefit of the investors,” the report notes. “Due to the COVID-19 pandemic, the Receiver, based on the advice of his hotel consultants and management team, decided to close down the Jay Peak Resort and Burke Mountain Hotel in early March and apply for a PPP loan.”

Goldberg told the court that the receivership sought federal help through the CARES Act early in the pandemic when Burke and Jay had to close due to the shutdown.

The Paycheck Protection Program helped to cover the salaries of employees, Goldberg said.

Quiros was accused of misappropriating millions of foreign investor funds in the EB-5 program and using tens of millions to fuel his lavish lifestyle allegedly. Those investors’ pledges of more than a half-million apiece had been linked to the promise of permanent green cards when their investments could be linked to job creation.

As part of the receivership, Goldberg and his immigration counsel “continue to work with investors and their attorneys in responding to USCIS’s (the United States Citizen and Immigration Service) requests for evidence in support of their citizenship applications,” he noted in the most recent report to the federal court.