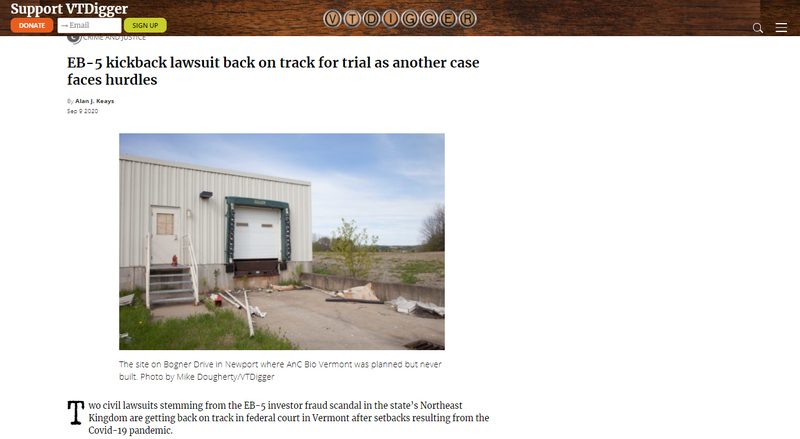 Two civil lawsuits stemming from the EB-5 investor fraud scandal in the state’s Northeast Kingdom are getting back on track in federal court in Vermont after setbacks resulting from the Covid-19 pandemic.

Separate video hearings in both cases took place Wednesday, with one of them addressing issues relating to deposing witnesses who reside across the now-closed international border in Canada while the other appears nearly ready to finally go before a jury.

“I understand there are complications in this case because of the pandemic,” federal Judge Christina Reiss told attorneys at the start of a hearing in one of the cases before asking if they had a “game plan” for when the matter could proceed to trial.

“We choose dates that work for everyone also with a reasonable expectation that maybe there will be a return to normalcy,” attorney Chandler Matson told the judge.

“If you have that information you better share it,” Reiss replied to Matson’s suggestion that he may have insight concerning a possible end to the pandemic.

Matson told the judge his crystal ball on Covid-19 wasn’t clear, but he still hoped the case could proceed to trial by March.

Matson and Russell Barr are Stowe lawyers representing a group of E-5 investors alleging a “kickback” scheme involving an attorney who brought foreign investors and their money to development projects headed by Jay Peak developers Ariel Quiros and Bill Stenger.

Quiros, the resort’s former owner, and Stenger, the ski area’s past CEO and president, as well as two of their associates, have been charged in a federal indictment. That indictment charges all four men with fraud in a failed EB-5 financed project to build a $110 million biomedical research facility in Newport.

The lawsuit had been set for trial in April, but that was put on hold as a result of Covid-19 and federal courts in Vermont postponing jury trials.

“Criminal and civil trials are being set and are scheduled to go forward this month in this courtroom so we’ll be experts by the time we get to you,” Reiss told both Mattson and Barr.

The lawsuit, brought on behalf of a group of Chinese investors, is against Jianming Shen, an immigration lawyer from New York state.

Those investors say they never would have put money into Jay Peak projects had they been warned by Shen, their attorney, about allegations of fraud that surfaced in 2012 and again in 2014.

The legal action claims that Shen took more than $1.25 million in kickbacks in return for bringing investors to EB-5 funded projects to make massive upgrades at Jay Peak ski resort led by Stenger and Quiros.

The lawsuit alleges that at the time Shen was bringing investors to the Jay Peak projects he did not tell immigrant investors he was also getting a payoff from Stenger in addition to the legal fees he charged those investors to help with their immigration paperwork.

Several of the earlier EB-5 projects headed by Quiros and Stenger were built, including large-scale upgrades at Jay Peak, the northern Vermont ski area.

But, later projects ground to a halt when regulators say they uncovered a “Ponzi-like” scheme. That scheme, according to court filings, involved the developers commingling and misusing $200 million of the more than $400 million raised from foreign investors through the EB-5 visa program.

Quiros, regulators say, also siphoned off another $50 million to pay for personal expenses, such as a New York City condo and his own taxes.

The federal criminal fraud charges brought against Quiros and Stenger and two other men in May 2019 are linked to a project they headed to build a biomedical research center in Newport, known as AnC Bio Vermont. That project has since been termed by federal regulators “nearly a complete fraud.”

Also Wednesday, Reiss presided over a hearing in another EB-5 related case, this one brought

by a court-appointed receiver — now overseeing Jay Peak and other assets at the center of the fraud scandal — against the former owner of the ski area who sold it to Quiros.

The receiver, in the lawsuit, alleges the Canadian company, now known as Saint Sauveur Valley Resorts, fraudulently accepted $18 million in EB-5 immigrant investor funds from Quiros as part of his payment for the ski resort in 2008.

Attorney Stephanie Tambrand, representing Goldberg at the hearing Wednesday, told Reiss that depositions still needed to be taken of two lawyers who represented Saint Sauveur Valley Resorts at the time of the sale in 2008.

Those lawyers, according to Traband, are both in Canada as well as other parties and witnesses connected to the case.

“The Canadian component complicates things because there isn’t free passage over the border because of the pandemic,” Reiss said, adding, “I’ve had my eye on how long this case has been pending and we need to move it along.”

David Pocius, an attorney for Saint-Sauveur, told the judge Wednesday that in addition to that issue, he has been having difficulty going through the millions of pages of documents provided to him by the receiver related to the case.

For example, he said, certain emails have attachments that aren’t readily accessible.

“That issue alone could delay things by months,” Pocius said. “That’s yet another wrinkle.”

Tambrand responded that she is working to resolve that issue, adding that it hasn’t been an easy one to fix.

“It has been, for a lack of a better way, a slog,” she said of the discovery process.

Reiss asked the two parties to work on a schedule together to address discovery issues.

“If you can’t go do something because the border is closed, OK, but then I want you to be fast-forwarding on something else,” Reiss told the attorneys. “There are things that can happen short of you going across the international border.”