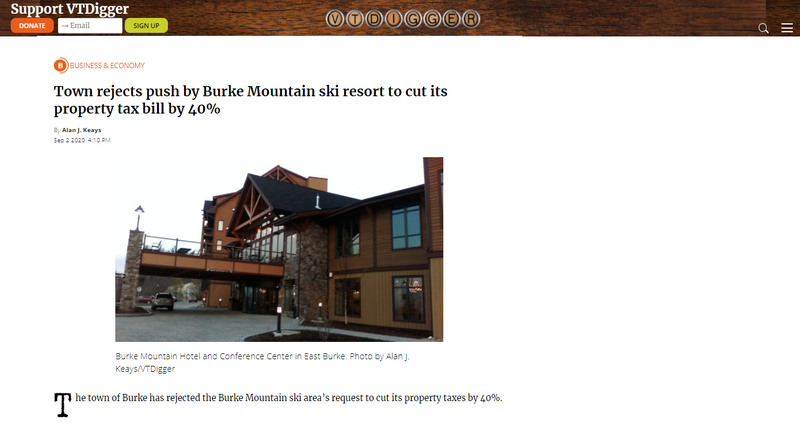 The town of Burke has rejected the Burke Mountain ski area’s request to cut its property taxes by 40%.

The town’s Board of Civil Authority upheld the town assessor’s $18.7 million valuations for the financially struggling Northeast Kingdom ski area, which includes the 116-room Burke Hotel and Conference Center that opened in 2016.

The ski area’s management had asked that the property value be dropped by $7.5 million, down to $11.2 million.

It’s the latest setback for Michael Goldberg, the court-appointed receiver overseeing both the Burke Mountain and Jay Peak ski areas. Since being named to that post in April 2016, Goldberg and his staff have worked to overcome an investor fraud scandal that has led to the indictment of Ariel Quiros, former owner of both resorts, and Bill Stenger, who was Jay Peak’s president and CEO.

Last week, the Jay Board of Civil Authority denied a request to slash the assessment of Jay Peak ski resort, affirming the town’s current valuation of about $121 million. The ski area management wanted to drop it by more than half, to $58.5 million.

In both cases, Roger Prescott, an attorney from the firm Downs Rachlin Martin, represented the ski area, management team. He argued that no buyer would pay anything close to the valuations set by the towns.

Prescott argued that the towns should have valued the ski resorts mainly on the revenue, or income, they take in, and not so much on the value of the property itself.

In both cases, Prescott said, that would result in a much lower tax assessment, since the resorts’ revenues are much lower than the property assessments set by the towns.

He told Burke officials two weeks ago that the resort has lost more than $1 million a year for the past several years, though those losses have been shrinking.

Prescott said that, with the effect of Covid-19 pandemic on the tourism and ski industry, both resorts are expected to take particularly harder financial hits this year.

Burke’s Board of Civil Authority, in its decision this week, did not find Prescott’s argument persuasive about valuing the resort on the income approach. That approach “does not take into consideration all of the assets of the mountain; it only considers those that produce income,” the ruling stated.

“Burke owns over 1,600 acres and many of those acres do not produce income but have value,” the panel said. “Land values in Burke have increased substantially over the last few years and the income approach does not take this appreciation into consideration.”

The Burke decision can be appealed to either the state’s Division of Property Valuation and Review or to Caledonia County Superior Court. Decisions made there could be appealed to the Vermont Supreme Court.

Neither Prescott nor Goldberg could immediately be reached Tuesday for comment.

William Krajeski, president of New England Municipal Consultants, who works with the towns of Jay and Burke on property assessments, presented arguments in both towns against lowering the resorts’ values.

“I’m glad they upheld our valuation,” he said Tuesday.

However, an appeal would not surprise him.

“I can’t believe they would come this far and not,” Krajeski said. “I can’t guarantee that, but it seems as though they put some time and effort into these appeals and I would assume they plan on taking it further than this.”

On the other hand, “Mr. Goldberg might look at this and say, ‘OK, that’s enough.’ That would be wonderful but I doubt that will happen,” Krajeski said.

The Jay Peak and Burke Mountain ski areas are the two largest assets Quiros turned over to the federal government in a settlement reached two years ago with the U.S. Securities and Exchange Commission to resolve civil investor fraud claims.

As part of that agreement, Quiros agreed to surrender $81 million in property, including the two northern Vermont ski resorts.

In April 2016, the SEC and state regulators accused Quiros and his former business partner, Stenger, of misusing $200 million of the more than $400 million they raised through the federal EB-5 immigrant investor program.

At Burke, more than 120 foreign investors pumped at least $500,000 each, for $67 million in total, into the hotel and conference development headed by Quiros and Stenger.

Under the EB-5 visa program, foreign investors who put at least $500,000 each into a qualified project can obtain green cards —  permanent U.S. residency — provided their investment leads to the creation of at least 10 American jobs.

At Burke, the job creation requirements have not been met and many investors have not obtained the green cards they had been seeking. Lawsuits have been filed.

Quiros, Stenger and two of their business associates have since been indicted on federal criminal charges tied to a separate EB-5 project, plans for a $110 million biomedical research facility in Newport. The SEC said it later found that development was “nearly a complete fraud.”

Quiros has since pleaded guilty to criminal charges against him and is awaiting sentencing. Stenger has pleaded not guilty and is expected to stand trial next year.