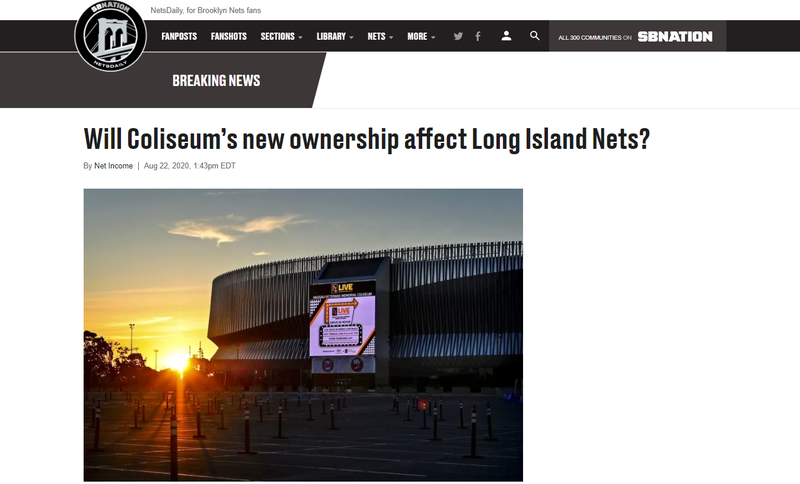 It’s official. Mikhail Prokhorov has dumped another U.S. sports asset, this time the revamped Nassau Coliseum. He’s out and the Florida investor who helped finance “The Barn’s” renovation, is in. How will that affect the Long Island Nets who’ve played their last three seasons at the Coliseum in Uniondale?

Prokhorov who made an estimated $1 billion profit on the sale of the Brooklyn Nets and Barclays Center to Joe Tsai, essentially dumped the money-losing Coliseum back in June. Citing the pandemic, Prokhorov shuttered the building, laid off workers, stopped paying the monthly lease to Nassau County and walked away from debt obligations as well.

So, this week, the county which owns the arena, made a new deal with the main debtholder of the arena, Jupiter, Fla.-based Nick Mastroianni II. Mastroianni put together a financing package back in 2016 when Prokhorov and Bruce Ratner renovated the arena at a cost of more than $180 million. The package —a reported $100 million— came mainly from Chinese investors trying to take advantage of the EB-5 visa program. In return for a $500,000 investment, a citizen of another country can obtain a U.S. green card under the program.

Newsday reported that under the agreement, Mastroianni’s Nassau Live Center LLC will pay $2 million in lease payments to the country and get the arena reopened. The company will also work with a Long Island builder to develop 70 acres of parking lots owned by county that surround the arena.

The deal has consequences for two New York teams, the Islanders who are supposed to play their final season at Nassau next year and the Long Island Nets who’ve played three seasons at the arena. Newsday reported...

The county said in a news release that Mastroianni has agreed to honor the contract with the New York Islanders to play their final season at the Coliseum as well as the deal that calls for the Long Island Nets to play their future NBA D-League schedules in Uniondale.

That would seem to suggest everything is now set for the arena to host the Long Island team whenever the G League returns to action. The NBA has said little to nothing about the G League reset and one NBA team, the Suns, recently dropped its affiliation with the league. Two new teams, one in Mexico City, and the other, a development team for top high school players, are expected to join the league next season.)

However, the re-opening of the arena is months away, As a part of the transition from Prokhorov to Mastroianni, the county granted Mastroianni’s company a 60-day “standstill period” to prepare its plan for restarting coliseum operations, with the possibility of a 30-day extension.

Longer term, there’s a great deal of uncertainty about the Coliseum’s infrastructure. The county expects Mastroianni will seek a new long-term operator of the arena, someone with experience in arena management. Meanwhile, Newsday reported that Oak View Group, the arena development company that will co-own and operate the Islanders’ new home, the UBS Arena at Belmont, has expressed interest in downsizing the Coliseum into a more intimate musical concert venue and creating synergy with UBS Arena.

NetsDaily sought comment from Joe Tsai’s BSE Global, which is the parent company of the Long Island Nets as well as the NBA team and Barclays Center, but received no response. Could the Nets relocate its G League franchise? In 2019, the team had to relocate its G League Finals games from Nassau to Island Federal Arena at SUNY Stonybrook.