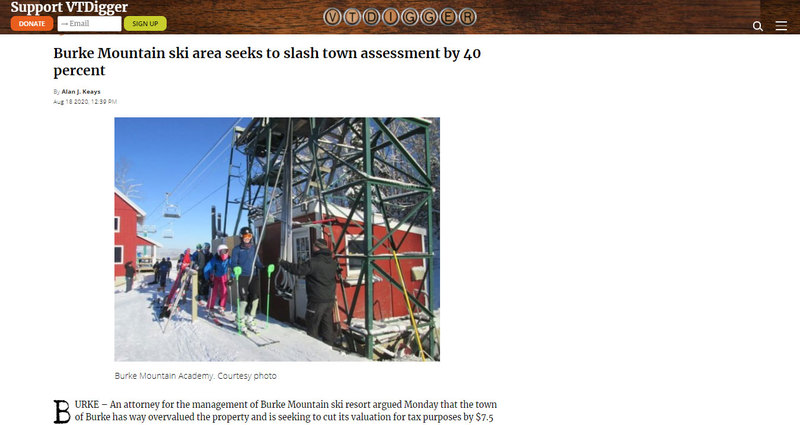 An attorney for the management of Burke Mountain ski resort argued Monday that the town of Burke has way overvalued the property and is seeking to cut its valuation for tax purposes by $7.5 million, or about 40 percent.

Lawyer Roger Prescott argued that the resort, currently overseen by court-appointed receiver Michael Goldberg as a result of an investor fraud scandal involving its past developers, Ariel Quiros and Bill Stenger, has been losing money for years.

The town has the 116-room Burke Mountain Hotel and Conference Center and other related properties at the Northeast Kingdom ski resort assessed at $18,722,700.

Prescott, of the Burlington-based law firm Downs Rachlin Martin, told the town of Burke’s Board of Civil Authority at a tax appeal hearing late Monday afternoon that the assessment should be set at a much lower figure.

The meeting Monday in Burke followed one that took place in the town of Jay last week where Prescott challenged the $121 million assessment of the Jay Peak ski resort and other related properties in that municipality.

Prescott argued that Jay Peak, also overseen by Goldberg, should be valued at $58.5 million, a cut of more than half from the town’s assessment.

The Boards of Civil Authority in both towns are expected to consider the requests and issue their findings within the next couple of weeks. Those rulings can then be appealed all the way to the Vermont Supreme Court.

Prescott told the board in Burke on Monday that the resort in that town is an “Income producing property.” Its value, he said, should reflect the revenue it brings in rather than comparing it to other properties, like what is done when setting the value of a residence.

“Every ski area is unique,” he said, adding that location, mountain terrain, and amenities are different for each.

The resort has lost more than $1 million a year for each of the last three years, though that number has been declining, Kevin Mack, Burke Mountain’s general manager, said at the meeting.

However, he said, the losses are expected to far exceed $1 million in 2020 due to the Covid-19 pandemic that has slowed business for almost every sector of the economy.

William Krajeski, president of New England Municipal Consultants and Burke’s town assessor, told the board during the Monday hearing that the income approach to setting the assessment for the resort failed to take into account other factors.

For example, Krajeski said, there are hundreds of acres of developable land owned by the resort that are not producing any income, but still have value. That land that is not a direct part of the ski area and could be sold and developed for a variety of uses, he said, from residences to a golf course as had been pursued years ago only to be later shelved.

“The income approach does not capture this,” Krajeski said, adding that property values in the East Burke section of town that is home to the resort have been “booming’ in recent times.

“I hope the mountain catches a part of that tail,” he said.

The Burke resort has been assessed by the town over the past several years at the following values:

Quiros bought the Burke Mountain ski resort in 2012, using $7 million in money it commingled from a series of EB-5 financed projects he headed with Stenger to make the purchase.

Stenger is the former CEO and president at Jay Peak. Quiros is the owner of Q Resorts, a company that includes Jay Peak, which he owned as well as Burke Mountain.

In the weeks after the court seizure of Burke Mountain in 2016 by federal regulators, Goldberg and a management company removed signs throughout the property emblazoned with Quiros’ signature Q.

Goldberg has been managing both Burke and Jay Peak ski resorts since April 2016 when federal and state authorities brought enforcement actions against Quiros and Stenger tied to the EB-5 funded developments they led.

The regulators said that the developers had misused $200 million of the more than $400 million they raised from hundreds of foreign investors through the federal EB-5 visa program for their projects. Those developments included massive upgrades at Jay Peak as well as the hotel and conference center at Burke.

Both Stenger and Quiros, along with two of their associates, were indicted last year on federal criminal charges in connection with another $110 million project they headed to build a biomedical research facility in Newport, known as AnC Bio Vermont.

At Burke, Prescott told the town of Burke’s Board of Civil Authority during the hearing Monday that the ski resort would never come close to fetching the town’s value set for the property at $18.7 million.

The hotel and conference center opened at Burke in September 2016, paid for with $67 million raised by Stenger and Quiros and coming from more than 120 EB-5 investors.

While Goldberg is looking to sell off the Jay Peak resort to obtain funds to pay back defrauded EB-5 investors, the sale of Burke Mountain ski area remains on hold.

That’s because the Burke project has failed to generate the required jobs for EB-5 investors who each put up $500,000 each, plus administrative fees, in exchange for green cards, or permanent U.S. residency, if their investments led to the creation of 10 American jobs.

As the hearing came to a close Monday in Burke, Prescott told the members of the Board of Civil Authority that the town shouldn’t just pass the matter off to the next level of appeal to consider a possible change in value.

That could, he said, leave the town on the hook to pay money back to the resort.

“It’s not a threat,” Prescott shot back.

“Sounds like a threat to me,” said Cathi Feeley, the town’s treasurer who served Monday as the chair of the Board of Civil Authority.

“If you took it that way I apologize,” Prescott told the board.