A plan to get the Coliseum, Nassau Hub back on track 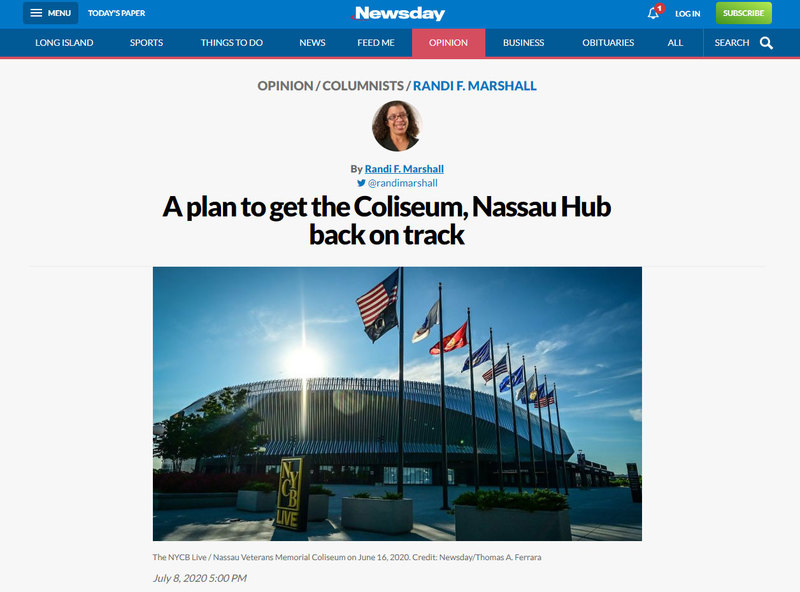 Nassau County’s decision to issue an order of default this week to the operator of Nassau Coliseum — and threaten to terminate the lease on the arena — isn’t about simply trying to collect unpaid rent.

The goal, county officials told The Point Wednesday, is much larger.

In the short term, they said, they hope to find a way to make sure the New York Islanders are able to play the 2020-2021 season at the Coliseum. In the longer term, they want to make sure that the development of the land around the arena, known as the Nassau Hub, moves forward.

“We can’t take a passive role here,” Nassau County Executive Laura Curran said. “We have to get some control and some constructive conversation going, and we really have to lead it if we can.”

In filing the default notice, the county started a 15-day clock with Coliseum operator Onexim Sports & Entertainment. If Onexim doesn’t pay the $2.1 million it owes in that period, the county could move to try to terminate the lease. But Nassau officials hope that instead, the notice will encourage Onexim’s lender — a group known as Nassau Coliseum Funding 100, LLC — to come to the table and work with the county, Onexim, and Hub master developer Scott Rechler on finding a way forward. That could include reopening the Coliseum.

This isn’t the first time Nassau County has dealt with unpaid rent on the Coliseum. In late 2014, the New York Islanders and SMG, which then jointly held the arena lease, owed the county nearly $5 million — money that eventually was mostly paid back.

Complicating matters now, however, is that Onexim has a $100 million loan with Nassau Coliseum Funding 100 that’s due next year, and is secured by the Coliseum lease. Behind the lending group: Nick Mastroianni, a Huntington native who has raised money through the controversial EB-5 visa program, which provides visas to wealthy foreign investors, primarily from China, in exchange for funding job-creating projects. Mastroianni is controversial himself, with a history of legal troubles.

Still, the county expects Mastroianni, and the consortium of EB-5 lenders who are awaiting their payments, will be key to making the deal that could bring the Islanders home next season — and to moving forward with the big-picture economic development Nassau needs.