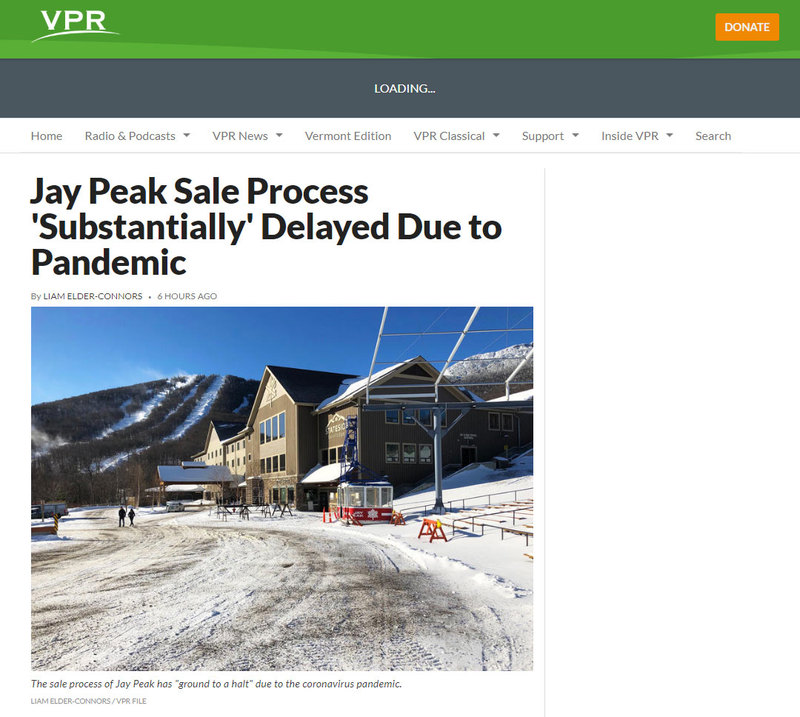 The sale process of Jay Peak has "ground to a halt" due to the coronavirus pandemic.

The process of selling Jay Peak Resort has “ground to a halt” due to the COVID-19 pandemic, according to recently filed court documents. The ski resort, which is managed by a court-appointed receiver, was put up for sale after its former owners were accused of defrauding foreign investors.

In the court documents, Michael Goldberg, the receiver, wrote that prior to the crisis, 12 potential buyers had expressed interest, but none had submitted bids. He said while he expects one of those groups to do so, he’s unsure when a sale could happen.

The resort is also facing a financial hit. Jay Peak was profitable and poised to have a good winter season; advance vacation bookings were solid and season pass sales were up “dramatically.”

But the arrival of COVID-19 forced Jay Peak to shutter operations in mid-March, typically one of the most profitable months, according to the court documents.

The closure is “expected to substantially affect the Resort’s profitability,” Goldberg said in the filings.

Both Burke and Jay Peak were tied up in a case that’s been called the largest fraud in Vermont history.

In 2016, Bill Stenger and Ariel Quiros, the owners and developers of the resorts, were accused of misappropriating more than $200 million from foreign investors through the federal EB-5 program. It's designed to offer a path to citizenship for immigrant investors who agree to put at least $500,000 into approved projects in economically depressed regions of the United States and generate a certain number of jobs.

The money was intended for an array of developments throughout the Northeast Kingdom, including one at Jay Peak and Burke. In some cases, the developments came to fruition, like the Jay Peak water park. But others, like the proposed downtown redevelopment in Newport or a planned biotech facility, never materialized.

Goldberg, who was appointed by a federal court to manage the assets in the case, has sold some of the related properties, including a parcel of land owned by Quiros to Kingdom Trails, a non-profit that manages a popular network of mountain biking trails.

While the sale of the Jay Peak has stalled, Goldberg said he hoped summer operations at Jay Peak would resume soon. In the court documents, he said despite some cancelations, there are still weddings and conferences scheduled for July.

He was hopeful activities like golf could start again soon, too ⁠— Gov. Phil Scott approved the reopening of golf courses on May 6.

But Goldberg added business probably won’t pick up until the Canadian border re-opens. For example, he wrote that visitors from Canada account for 70% of the golf rounds. He also indicated the season passes for next year’s ski season could below. Goldberg said the resort has pushed back its early bird deadline, added a new payment plan and relaxed cancelation and deferment policies.

“The hope is that as we near that early booking deadline, the volume will increase,” he said.